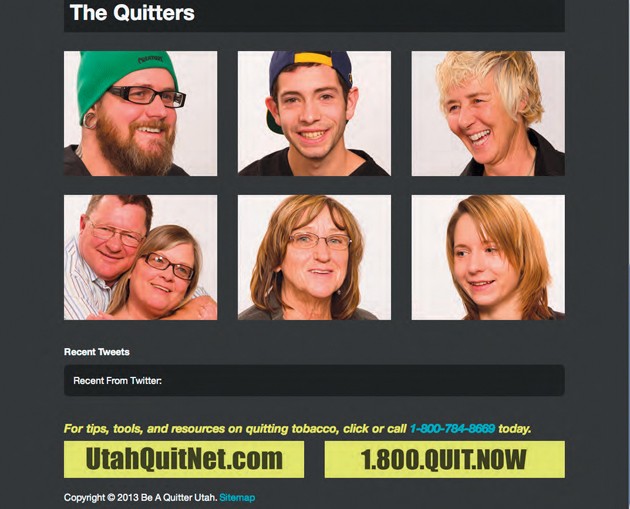 The Utah Department of Health started the Be a Quitter campaign to help inspire tobacco users to quit smoking. The campaign features seven Utahns in their quest to give up tobacco.

The Utah Department of Health launched a reality campaign last month to help inspire tobacco users across Utah to quit.

The campaign, called Be a Quitter, follows the journey of seven Utah residents as they quit using tobacco. Each of the participants signed up to be part of the campaign and were interviewed and chosen by UDOH to have their stories publicized.

“We started the campaign because we wanted to show the reality of quitting,” said Janae Duncan, program coordinator for the UDOH Tobacco Prevention and Control Program. “We wanted to highlight real people and what it takes to go through the journey of quitting, from the good and bad, to the ups and downs.”

Through the campaign, participants have made several television commercials that have aired on local channels such as ABC, Fox and CW. In addition, they have been using social media, like Facebook, YouTube and Twitter, to talk about their individual journeys. Videos the participants have uploaded and continue to make about quitting and their tobacco use can be viewed at www.beaquitterutah.com.

“There are a variety of ways to keep up with them and their stories in addition to what you see on TV,” Duncan said. “On that same site there is access to quitting resources for others who want to quit too.”

The campaign officially launched on Feb. 14 and will run for eight weeks until mid-April.

“It hasn’t been easy for all of them,” Duncan said. “They’ve used a variety of methods in trying to quit. Some of them have quit and some are still in the process, but they’re working together and getting support from people as the campaign continues.”

The seven residents all live along the Wasatch Front and range in age from 21 to 61. One of the participants, Tanner McCormack, 21, is a former Tooele resident who has smoked since he was 16. He is working to quit smoking because he has a baby due in July.

Another participant, 35-year-old Gavin Hoffman from Salt Lake City, is working to quit because he has asthma and is getting married this summer. Hoffman, whose five-week anniversary of being tobacco free is today, said the campaign has worked for him because it forced him to step outside of his comfort zone. He has been a smoker for 20 years and has tried to quit smoking a few different times without luck.

“One of the things that I really like about this campaign is that in general, I’m a very introverted person,” he said. “It has really helped break down some of the barriers that I put up by myself. All of us have different stories and reasons for quitting, but I think everybody could follow our campaign and find one of us that they relate to on some level and hopefully we’ll help inspire them to quit smoking.”

The other five participants also each have different reasons for quitting smoking, many of which are related to health and family.

“They’re really just an inspiring group of people,” Duncan said. “We’re glad they had the courage to share their stories. Hopefully smokers in Utah and Tooele County will identify with at least one of them and be inspired to take steps for themselves.”

Last May, a study presented by Hilary Makris, Blake Smith and Jay Sadler — all former graduate students in the public health department at Westminster College — provided the first detailed data on tobacco use in Tooele County. It included information on who smokes, why they smoke, and what may help them to stop.

Duncan said Tooele is unique because it’s hard to know exactly why there’s higher tobacco use in the county, but she hopes the campaign will help residents join in quitting and share their stories as well.

“If people in Tooele County become aware of this campaign, then at least they’ll get a flick or spark that says ‘I want to do this too,’” Hoffman said. “I hope that we’re some sort of an inspiration. I’ve tried to be very realistic. It’s not sunshine and roses. It sucks and it’s a really hard thing to quit, but you just have to jump in and be determined to do it.”