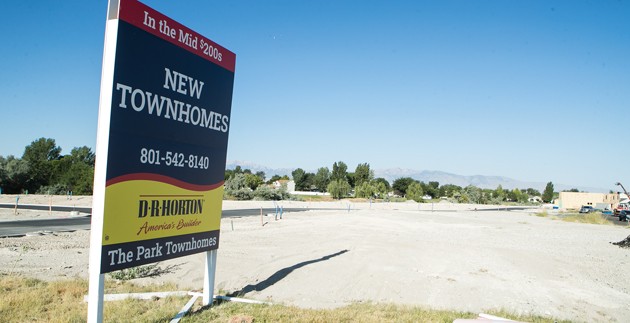 Work has already started on the Park Townhomes in Stansbury Park. D.R. Horton bought the apartment project from Derald Anderson and changed the apartments to townhomes.

The controversial apartment complex under construction near Stansbury Park’s popular sledding hill has changed ownership and will now be townhomes.

The Tooele County Planning Commission approved the concept plan for the 64-lot The Parks Townhomes Subdivision during their meeting on Wednesday night at the County Building.

The Parks Townhomes are on 5.38 acres adjacent to Country Club and Gateway drives, south of the University Clinic, according to the staff report on the concept plan.

Ground had already broken in the area for the previously approved apartments, but the new owner — D.R. Horton — desired to develop the units as individually owned townhomes, according to Jeff Miller, Tooele County planning staff.

The change to townhomes required the subdivision into 64-lots so each townhome can be sold separately, according to Miller.

No alterations to the site plan were needed for the conversion to townhomes, he said.

The property was rezoned on May 15, 2018 by the Tooele County Commission with a zoning condition restricting the height of structures to no more than two stories with apartments being limited to townhome style buildings.

The townhomes will comply with the zone conditions, according to Miller.

During the approval processes for the rezone and the conditional use permit, there were many comments from the public indicating that many would prefer to have the townhomes sold as individual units, with the majority of the townhomes being owner occupied, according to Miller.

The townhomes are adjacent to an area in Stansbury Park that the County’s General Plan anticipates to be either a mixed-use center or mixed-Density residential/cluster.

The proposed townhome development associated with the proposed subdivision is an appropriate use in either one of these areas, Miller said.