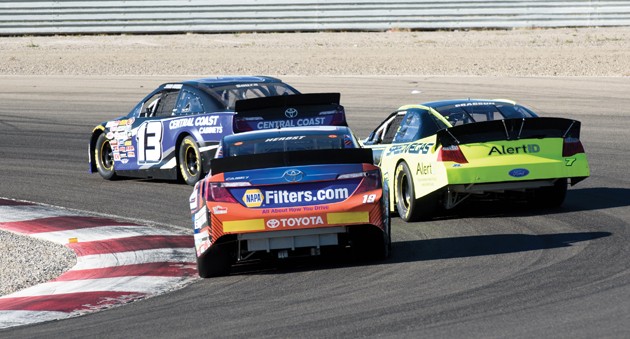 Todd Souza (13), Noah Gragson (7), and Riley Herbst (19) battle for position in the corner at the NASCAR K&N race in 2016 at Utah Motorsports Campus. Now known as the ARCA Menards Series West, professional stockcar racing returns to UMC on June 27.

Up to 500 spectators allowed to attend ♦

It will be five weeks later than originally scheduled, but the ARCA Menards Series will be competing at Utah Motorsports Campus this summer after all.

UMC officials announced the series’ rescheduled date Saturday, and also announced that 500 tickets will be available for spectators with county and state health regulations in place. The series was originally supposed to visit UMC on May 23, but had to postpone the event because of the COVID-19 pandemic.

“It’s a little later than we’d planned, but we’re thrilled to welcome NASCAR-style racing back to UMC,” UMC Senior Vice President Dixon Hunt said in a press release. “The COVID-19 pandemic has mandated some changes, but we’re rolling with the punches and doing the best we can to bring world-class racing back to our great Utah fans. We look forward to seeing 500 happy faces in our grandstands, enjoying the sights and sounds of those thundering stock cars once again. It’s nice, finally, to be able to say, ‘let’s go racing!’”

Gates will open at 11 a.m. June 27. All guests’ temperatures will be taken at the gate with social distancing guidelines in place. UMC staff will wear masks and all public touchpoints will be regularly disinfected throughout the day.

Karting and mini-moto sessions will be available at the UMC Kart Center throughout the event, and the facility’s Fun Depot will be open as well. In addition to the food offerings at the Fast Track and Throttle cafés, there will also be a variety of food trucks on hand.

Tickets are available through Ticketmaster for $50 each, plus taxes and fees. A parking fee of $5 per car will be collected on the day of the event.

The June 27 race will mark the ninth time the ARCA Menards Series West, formerly known as the K&N Pro Series West until NASCAR bought out ARCA in 2018, has visited Tooele County. The series, which represents NASCAR’s fourth tier behind the top-level Cup Series, Xfinity Series and Gander Outdoors Truck Series, was a regular visitor to the former Miller Motorsports Park from 2007-14 and visited again for a doubleheader weekend in 2016.

The event will include two 30-lap races on UMC’s 2.2-mile East Course, along with practice and qualifying sessions. Skydive Utah will perform a skydive with the American flag prior to the second race of the day.