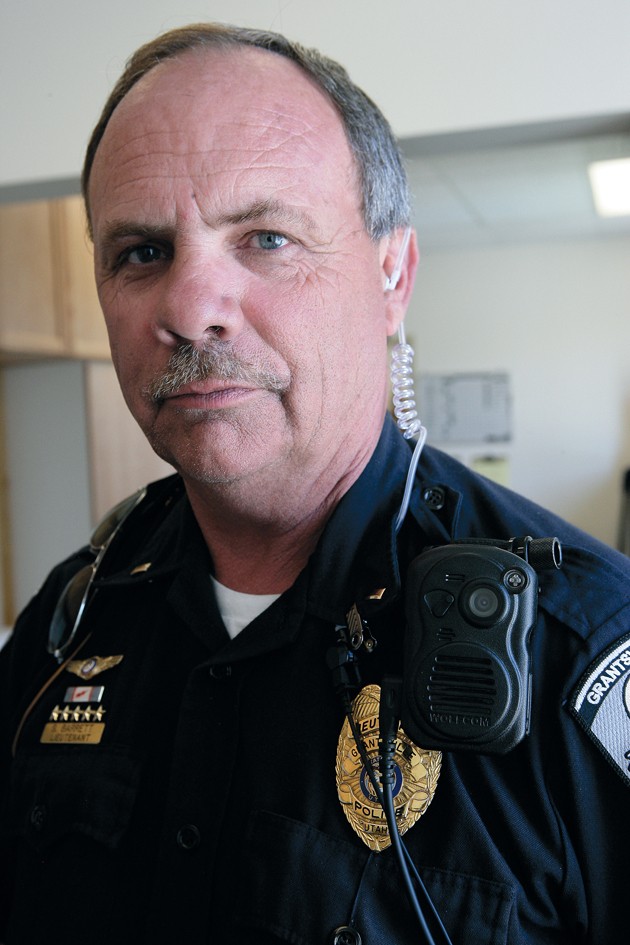 Local law enforcement agencies are coming out in support of a state Senate bill that would place control of statewide body camera policy in the hands of the Peace Officer Standards and Training council.

The proposed legislation, introduced by Sen. Daniel Thatcher, R-West Valley City, is competing with a bill in the state House of Representatives, which puts control of body camera policy in the hands of the state government.

Thatcher said there is no legislation that governs the use of body cameras in Utah, which law enforcement agencies are not required to carry. The creation of minimum standards for use of body cameras and release and retention of footage is in the best interest of the state, he said.

Since POST already establishes most of the law enforcement standards in Utah, Thatcher said there is no reason to deviate from that model on body cameras. The House bill on body cameras, sponsored by Rep. Daniel McCay, R-Riverton, would spell out the minimum standards as set by the legislation.

“Support for my bill has been much stronger because there’s less that can go wrong,” Thatcher said.

McCay’s bill would require officers to maintain their camera in working order, activate the camera before any law enforcement encounter and not interrupt the recording. It would also require law enforcement agencies retain and release recordings under the existing laws, including the state’s GRAMA policy.

In Thatcher’s proposal, footage from a body camera would be considered private if it is recorded while a warrant is served or if the record contains images of nudity, death or gruesome events. Thatcher said he was still working with attorneys from media organizations on details of the bill related to privacy.

Grantsville City Police Chief Kevin Turner said that he supports Thatcher’s bill, which is also supported by the Utah Chiefs of Police Association. The city has been using body cameras for three years and Turner said he welcomes the consistency in dealing with the security of footage the legislation would grant.

“If the bill goes through as it currently reads, it gives POST the ability to establish minimum standards for all agencies to follow regarding retention and release of what is recorded,” he said in an email. “This would give consistency and rules for agencies to follow where there is (sic) currently unanswered questions.”

For Tooele County Sheriff Paul Wimmer, the relatively new nature of body cameras means law enforcement is still figuring out the best policy and procedures to balance transparency and privacy. By putting the minimum standards under POST’s control, law enforcement agencies wouldn’t have to wait a full year for the Legislature to reconvene to fix a faulty policy, Wimmer said.

Tooele City Police Chief Ron Kirby also supports Thatcher’s bill and agreed with Wimmer the best policy on body cameras seems to change day-to-day and POST would be more responsive to those adjustments.

“It changes so fast, it’s breathtaking,” Kirby said. “We can’t keep up with it.”

Another benefit of POST setting the body camera policy is any change in policy is accompanied by a 30-day public comment period that lets law enforcement and private citizens weigh in on the topic, Kirby said. The POST council membership does include elected officials and academics, though the majority of members are active law enforcement members.

A major concern of any state legislation dictating body camera use is the retention of the body camera footage, according to Wimmer. The sheriff’s office is required to retain booking information for 75 years; a similar retention of the electronic video records would be costly to the department, he said.

While video footage connected to criminal investigations should be retained, a majority of the body camera footage recorded by deputies is routine traffic stops or other encounters that don’t result in charges or convictions, Wimmer said.

Body cameras are a tool that doesn’t just protect the public but law enforcement officers as well, Wimmer added. The footage from the cameras can be used to review officer conduct and prove or disprove complaints filed against officers.

Kirby also worries that if the Legislature sets the policy on body cameras, it will include unfunded mandates that could prove burdensome to cities. With no legislation that requires body cameras, some departments may consider not using them to avoid the requirements for retention or release, he said.