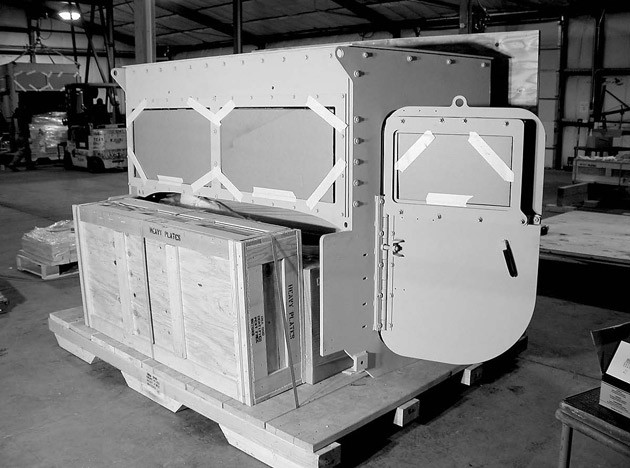 The M939 is a five-ton capacity, six-wheel drive cargo truck used for transportation of all types of supplies. The M939 series comes in six body styles: cargo, dump, wrecker, van and long wheel base cargo. Towing capacity is 21,000 pounds.

Production has begun to fortify passenger cabs for the M939 truck, a medium-size vehicle used for a variety of transportation missions in Iraq.

Like the lighter-weight HMMWV, the M939 is not armored, and with insurgents in the war-torn country increasing their attacks on Americans and Iraqis alike, the U.S. Army is trying to better protect its soldiers and fleet of vehicles. As a result of this program, TEAD has realigned in-house personnel to complete the project. Pending sufficient supplies and materiel TEAD will move to a 24-hour/7-days-aweek shifts to expedite production as far as possible.

“We are currently planning on increasing the workforce some, and the fabrication area will go to two shifts. This is a big program for TEAD, and the workforce is eager and excited to begin. As a result of becoming ISO 9001 certified, the employees here at TEAD have had the doors opened to the world showing their expertise and work ethic,” stated Tooele Army Depot Commander LTC Karol L. Ripley.

An initial order for approximately 6,000 M939 cab kits has already been placed by the GSIE. GSIE has sub-contracted this work out to a half-dozen depots. What is unique about TEAD’s operation is all fabrication and machining is being completed in-house. Approximately 123 kits will be fabricated at Tooele Army Depot by the end of August. However, this figure is likely to increase. Two kits have already been completed and shipped.

Standard issue Army Tactical Vehicles such as the M939 series are not designed to protect against attack from improvised explosive devices or small arms fire. Central Command’s truck drivers frequently operate these vehicles in a hostile environment requiring additional protection from ballistic threats.

Completed kits will be shipped to the SWA Theater for installation by GSIE employees, contractors, and war fighters.