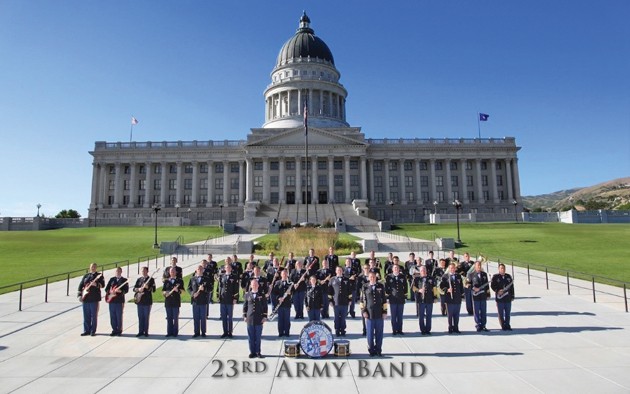 The 23rd Utah Army National Guard band will play at Fridays on VIne in the Tooele Aquatic Center Park on June 24.

This will be the group’s fifth performance at Fridays on Vine.

The band, which includes around 40 members, has been providing music for both military and civilian events for nearly a century.

The Army National Guard Band has performed in the United States, as well as Russia, Germany, and Morocco, totaling over 60 performances a year and making them the busiest military bands in the country.

They practice in West Jordan and perform a variety of songs, from movie music to patriotic songs, and other service songs.

Music keeps the members of the band focus, according to Staff Sgt. Quintin Hendriksen.

“Our mission is to provide music throughout the spectrum within military operations and to instill in our soldiers the will to fight and win,” he said. “We do this with the support of our citizens.”

During their performance this Friday evening, a number of smaller groups will make up the band’s performance, including a concert band, brass band, rock band, and brass quintet.

The concert will begin this Friday evening at 7 p.m. at the Aquatic Center Park located at the corner of 200 West and Vine Street in Tooele City.

Those attending are encouraged to bring lawn chairs or blankets to sit on.

A food truck will be at the park beginning at 6 p.m.

The members of the band are proud to serve as soldiers in the Utah Army National Guard and are grateful for the opportunity to perform for the citizens of Tooele County.