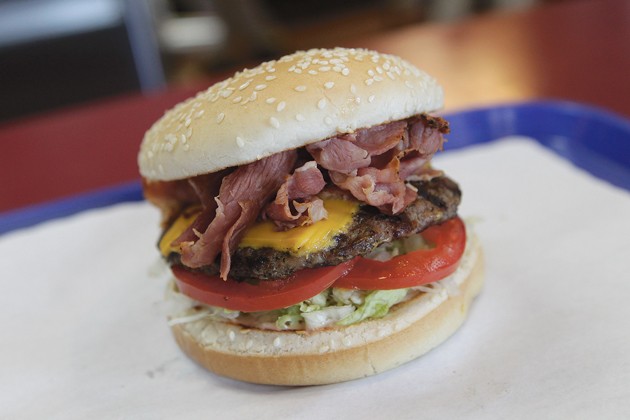 February 25, 2021
Art, math, fry sauce and hamburgers, all connect inside my brain

When I saw Tooele High School student Emily Wiley’s “Fry Sauce’’ painting, I was immediately overcome by the quality of the painting. I loved how Wiley captured the youthful emotions of the subjects as well as the allusion to Utah’s unique fry sauce.

Immediately all kinds of thoughts went off inside my head, like a pinball was running loose hitting things and setting off memories like lights and bells as it randomly bounced off the inside parts of my brain.

I hope you can follow the bouncing ball as I recount what happened in my head.

First, I tried to recall my one art class that I was forced to take in college during my senior year. The registrar’s office let me know I was deficient by one art class in my general education requirements so I could graduate.

It was art history or art appreciation. I can’t remember. We looked at a lot of slides of photos while the professor talked about them.

I have no idea what grade I got in that art class. They gave a diploma, so I didn’t ask questions.

I also narrowly escaped taking a math class in my senior year. The registrar also noted I was three credits deficient in math. The lowest level math class they would give me credit for was calculus.

Doing some quick research, without the aid of computers, I was able to convince the registrar to give me math credit for a logic class I took as an underclassman at a community college.

It turns out symbolic logic is another name for Boolean algebra.

And then the pinball hit the memory of the story I wrote in 2012 titled “The Burgers of Tooele County.”

That story included eight local burger places in Tooele County. Some are gone today, and there are some new places that weren’t here back then.

As I visited the burger places, some of the cooks were in the process of making their version of fry sauce.

At one place the secret ingredient was dill pickle juice. At another place a dash of chili powder was added to the mixture of ketchup and mayonnaise. Plain yellow mustard was the special addition at another place.

Mixing fry sauce appeared to be a real art.

To be consistent you must not only measure carefully, but you must also be careful to use the same brand names of ingredients.

Not all mayonnaises are equal, and if you have worked in a commercial kitchen you probably have met something called “heavy duty mayonnaise,” that isn’t made with heavy duty motor oil.

I thought fry sauce was one of those accidental foods, kind of like the stories you hear about ice cream cones — the ice cream vendor at the World’s Fair ran out of bowls so he rolled the neighbors warm waffles into cones to hold his ice cream.

My theory was that some guy was eating a hamburger with mayonnaise and ketchup when a glob of the two combined dropped on to his fries.

He tried it, and with all the enthusiasm of “Mikey likes it,” fry sauce was born.

But Google tells me otherwise.

What is the origin of fry sauce?

Google says, “Although sauce composed of a mixture of equal parts ketchup and mayonnaise appears in a New Orleans cookbook published in 1900, fry sauce was originally popularized in the United States by a chef named Don Carlos Edwards, who served it in his first restaurant, Don Carlos’ Barbecue in Salt Lake City, which eventually became the Utah-based restaurant chain Arctic Circle in the 1950s.”

That explains why the only place I saw fry sauce before moving to Utah was the Arctic Circle in Tumwater, Washington.

I thought I would write a sequel to the “Burgers of Tooele County,” about the secret fry sauces of our burger joints.

But I found out that fry sauce recipes are more secret than Kentucky Fried Chicken’s original recipe and more carefully guarded than the codes to launch nuclear missiles.

Recovering from that long memory and thought process, the pinball hit the bumper in my head that lit up a message in my brain that said, “Let’s go get a hamburger and fries with fry sauce.”

If I’ve missed your favorite place, other than your house, email me and I’ll add it to the list.