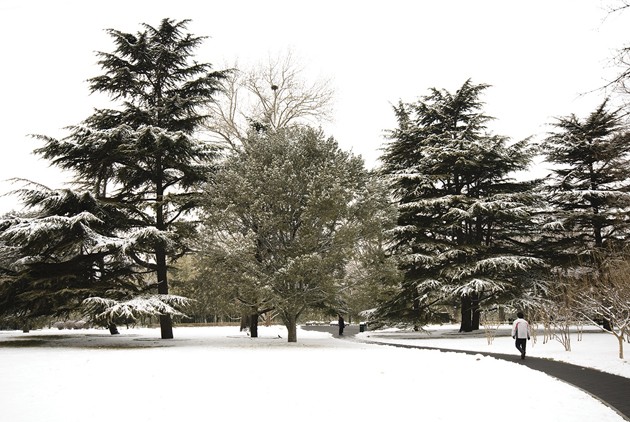 The evergreen pine tree can keep a landscape looking vibrant even in winter.

November 16, 2017
As cold and snow arrives, our conifer friends stand out

While leaves are just about gone from trees for the season, there are a variety of interesting branch shapes, berries, and bark colors to give interest to the fall landscape. Even so, it can look pretty stark out there as temperatures drop and the snow starts to fly.

That’s when our friends, the conifers, really come to the forefront. There’s something inspiring to see a tree prevail so majestically through the deep cold. Green, during the gray and white days of winter, is a sight to see. And while there are evergreen shrubs, low growers and ground covers, it’s the trees that are really noticeable, especially when a blanket of snow settles on them.

Not only are conifers pretty, they’re practical, too. They provide important shelter and habitat for birds who over winter, giving them cover and a respite from precipitation and wind. A stand of conifers is an impressive windbreak for the landowner as well.

Conifers are the source of most of the wood products we purchase for construction and home improvement. The next time you buy a 2×4 at your local lumberyard, look at the lumber stamp on the piece of wood. You’ll likely see “SPF” somewhere in the wording. This means the piece of lumber is one of three conifer varieties: spruce, pine or fir. All three are important wood species and are the most common in North America. Where you live in the country will influence which ones will be most available and stocked at your supplier.

The Latin name “conifer” means to bear cones. Most conifers, but not all, have cones. This plant family has both some of the smallest and largest trees in the world. There are over 500 species worldwide, with about 200 growing in North America. Some of the most common are bald cypress, cedar, hemlock, true fir, larch, redwood, and of course, Douglas fir, spruce and pine.

For us gardeners and homeowners, conifers have a place in our outdoor settings. There are similarities that set aside this family of trees, but enough differences to make it really interesting.

To start with, there are a variety of shapes to be enjoyed. Some are short and squatty; others are tall and pyramidal. Coloration can differ too between light and dark green, and some even have a bluish tinge to them, such as the famous blue spruce. Spacing between the branches differs as well, with vegetation that may be quite dense, or the tree may be more open. The scent of the trees differs as well, with some being quite aromatic.

When it comes to correctly identifying a standing pine, spruce or fir, many of us will not be able to do so. They look similar enough at first glance that nuances between them can be readily missed. Here are a few memory cues that will help you get it right.

Let’s start with most spruces. You can associate the “s” in “spruce” with three characteristics of this species. The needles are squarish (or diamond with distinct edges) and sharp. They are usually attached singly to a peg type structure. So, for spruces, you have three “s” words to associate: “squarish,” “sharp” and “single.”

To identify a fir, the single needles will be along twigs, in double rows. While that may not be especially memorable, the characteristic of the fir needles can be described with a couple of words beginning with “F,” creating a “fir” memory cue. A fir needle will be flat and flexible (soft).

Now, for the pines. Frankly, I don’t have a really spiffy memory cue for this. Identifying a pine is a combination of a couple of things. First, whether the needles are short or long, pine needles attached in clusters, not singly like spruce or fir. If you have a conifer with needles clustered in groups of two to five, you have a pine. Also, the pine’s cone is very rigid and woody, unlike the spruce that is softer, or the fir, that loses its outer scales while attached to the tree.

If you are using conifers in your yardscape, there are a few considerations to keep in mind. Like any tree, mature size needs to be considered so that the tree will ultimately fit well in your setting. Also, some prefer cooler temperatures that are found at higher elevations. While you may get a mountain tree to live in the desert, it’s not likely it will thrive. So, choose well.

Keep in mind that many conifers are not drought tolerant, so check before planting and determine what level of water investment you wish to make. Some are quite well adapted, such as some of the junipers.

Landscape and architectural themes are important as well when using these tree types. Some settings and home styles look better than others. An extreme mismatch in my mind is a “Santa Fe” style home with pines and spruces around it – although junipers would fit well. Even so, everyone has his or her own tastes! Also, I think conifers look better when they are planted in groupings.

Conifers can change the soil pH around them due to needles dropping and covering the ground. The needles tend to be acidic, and will leach into the soil. That’s not all bad! We can have some pretty alkaline soil, so offsetting that isn’t necessarily bad.

A word of warning about the Norfolk Island Pine: These beautiful plants are commonly available around Christmas. They sure look like a pine at first glance — but they’re not. Even though they are a conifer, they are tropical plants that require moderate temperatures, higher humidity and a good amount of light. With that set of requirements, they will do fine inside if you assure those needs are being addressed. They are quite attractive with their wide spreading branches and soft, distinctive needles. But, forget about planting them in your yard and watching them flourish. They simply won’t survive the winter.

Another conifer that doesn’t “play by the rules” is the Larch. This tree is a member of the pine family, but it has the uncommon characteristic of losing its needles every fall. Yes, that’s correct. This trait classifies the larch as deciduous, something that is not usually said about the more common pine family members. The larch is quite common in many parts of the world, and is used in home building, posts and timbers where rot resistance is valued, and for boatbuilding.

It will grow in our area as well and plantings of the larch tree has become more commonplace. Even so, many a larch tree has met an untimely death due to a homeowner or landscape maintenance worker thinking the tree had died when it dropped its needles as cold weather approached. Out came the chain saw. If you have a larch tree, don’t let this happen to you.

So, as the cold weather comes on, our conifer friends will be showcased. These strong, resilient and beautiful trees are like silent sentinels in the yardscape, keeping watch through the cold winter nights, and doing so unscathed by the bitter temperatures. We can all use hardy friends like that.