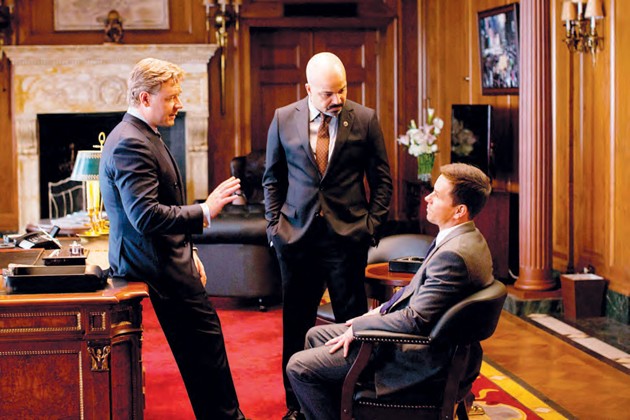 Ah, corruption, the social rot that has spawned a thousand stories.

And “Broken City” is full of it. Heck, without corruption, “Broken City” would just be a story about a private investigator who’s not actually all that great at his job — The End. It would be 20 minutes long. I’m pretty sure they’d still be able to pack a good chunk of their Fbombs in that time.

“Broken City” starts seven years ago, when undercover New York City cop Billy Taggart (Mark Wahlberg) is cleared of murder charges in the shooting of a 16- year-old kid who may or may not have been armed and who may or may not have raped and killed a teenage girl. But though he is criminally free and clear, Taggart’s chief, Carl Fairbanks (Jeffery Wright) and Mayor Hostetler (Russell Crowe) tell him he cannot go back to work.

So, as we find out seven years later, Taggart goes into business for himself, as a P.I., which mostly involves tracking down cheating spouses and, aided by his assistant, Katy (Alona Tal), trying to collect fees from past cases.

About a week or so before the NYC mayoral election, Hostetler calls on Taggart with a quick, easy job — follow his wife, Cathleen (Catherine Zeta-Jones), and discover who her lover is, all for $50,000.

In need of the money, especially for such an easy job, Taggart accepts. He quickly finds her spending some cozy time with Paul Andrews (Kyle Chandler), campaign manager for Hostetler’s opponent, Jack Valliant (Barry Pepper). Just before Taggart turns over the photos to Hostetler, Cathleen asks him to drop the job. But Hostetler gets his photos, and Taggart gets paid.

Then the plot thickens. Taggart, after a wicked fight with his actress girlfriend, Natalie (Natalie Martinez), over a sex scene she did in a movie, is called to a crime scene, where he finds that Andrews has been killed — and Fairbanks is looking at him for being an accessory to murder. Taggart plunges into an investigation into Andrews, which leads to information about Hostetler that could be a game-changer in the neck-and-neck election.

The pace is good and the twists and turns not abruptly made, so the audience feels a sense of peeling away the layers of the onion. The typical mysterious half-sentences and allusions in dark, shadowy corners are in full-force here, but at least the movie has enough sense to point that out itself.

Still, some elements — the excop with a chip on his shoulder, the too-good-to-be-true public official, the neglected wife with a secret peering mysteriously over her shoulder — are hard to not come across as cliché.

Performances are mixed, even within characters. Wahlberg’s performance was mostly believable and just gritty enough for the role, but his sudden anger at Hostetler for, apparently, setting him up feels random and unsupported by the facts the audience, at least was allowed to see. Zeta-Jones seemed like she was hardly in the movie at all, and when she was, I think she was going for troubled but it mostly just came across as kind of bored. Crowe was good. Tal was good.

Martinez was all right but her character seemed a bit superfluous. Tied to her was an alcoholism sub-plot that didn’t really seem to go anywhere or do anything, but, jeepers, did they talk like it was important for the first half of the show. Also, some of the profanity liberally peppered throughout seemed gratuitous and pointless in the context. But hey, I’m from Utah. New York is obviously just the kind of place where everything has to be, uh, effed in order for it to count.

The flaws make hiccups in an otherwise decent, almost noirlike mystery. And that’s too bad, because it has some pretty good points. Between Crowe and the perennially fertile ground of municipal corruption, and as long as you don’t think too much, “Broken City” does all right.

It’s eye for an eye, tooth for a tooth, fire fighting fire in this blood-soaked tale about a small band of cops taking down a vicious mobster’s empire. Very loosely based on actual events, “Gangster Squad” takes viewers along for the ride and doesn’t pull any punches.

Set in 1949 Los Angeles, we first meet Mickey Cohen (Sean Penn) as he’s disposing of a rival gangster by tearing him in two with a couple of sweet classic cars. We meet his foil, ex-military intelligence detective John O’Mara (Josh Brolin) when he beats the living tar out of a few of Cohen’s cronies who were trying to gang-rape an aspiring starlet.

Most of the police, and almost all of the public officials, have been bought by Cohen, but O’Mara’s chief (Nick Nolte) tasks O’Mara with taking a few of the remaining straight cops and taking down Cohen using guerilla tactics. Assisted by his wife, Connie (Mireille Enos), O’Mara recruits knifeman Coleman Harris (Anthony Mackie), brainy Conway Keeler (Giovanni Ribisi) and quickdraw Max Kennard (Robret Patrick), who brings along his partner, Navidad Ramirez (Michael Peña). Another cop, Jerry Wooters (Ryan Gosling), eventually acquiests to join the motley crew.

It takes a little trial and error, but they finally nail down enough cooperation and routine to achieve their quick, damaging strikes on Cohen’s operations.

Along the way, Wooters falls for Cohen’s girl, Grace Faraday (Emma Stone), which both puts the group in greater danger and gives them a slight leg up on Cohen. But Cohen is every bit as smart as he is cruel, and goes on the offensive against them, as well.

The costuming and styling are great, and gives a great vibe to the flick, especially the veritable fleet of gorgeous Fords, Oldsmobiles, Plymouths and other classics from the 1930s and 1940s (for car-lovers, one of the most painful moments of the movie may be watching them crash and burn). The performances were also great all around, which is to be expected with the heft of talent here, and everyone is clearly having fun.

On the other hand, the storytelling failed to give the characters enough depth and self to make almost any of them sympathetic to the audience, or to make their peril worrisome for viewers. The amount of gore could also be distracting to some, so squeamish people should think twice about going. If you can get past that, though, “Gangster Squad” is more than happy to take you along for the ride.