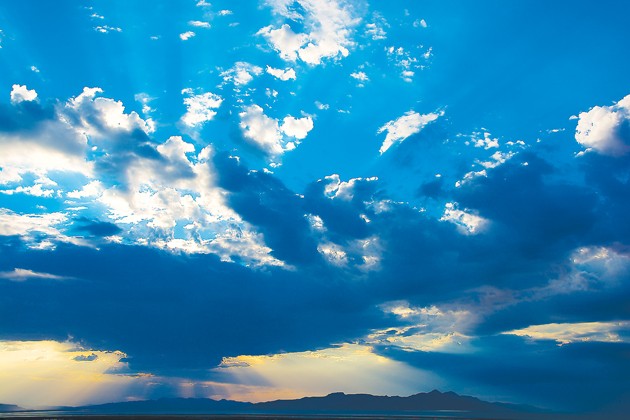 The sun sets over the Great Salt Lake with Stansbury Island in the distance. June saw above average temperatures and rainfall. The weather trend in June is expected

July 2, 2015
As promised, June was hot and relatively wet

Tooele Valley continued to chip away at its extended drought last month after June brought the predicted uptick of temperatures and a little extra rain.

June brought 1.51 inches of rain to Tooele City, according to Ned Bevan, a cooperative weather observer for the National Weather Service. Normal for the month is 1.11 inches.

The extra moisture helped to close the gap between the running precipitation total received so far since October — a total of 12.23 inches — and the amount of water Tooele is expected to receive in that amount of time: 15.21 inches.

The increased precipitation in April, May and June caused the U.S. Drought Monitor to drop Tooele County’s drought status from a grade D3 drought to a grade D2 last month. The Drought Monitor rates drought conditions across the nation on a scale of D0-D4.

However, the additional moisture did little to cool county residents as temperatures climbed. Last month saw average daily highs of 87.33 degrees and average lows of 60.37. Normal, according to the Western Regional Climate Center, would be highs of 82.6 and lows of 57.5.

Soaring temperatures on June 29 peaked at 101 degrees, coming within 1 degree of the Western Regional Climate Center’s heat record for the month. Tooele Valley has never recorded temperatures above 102 in June.

The valley’s annual heat record, set in the month of July, is 106.

The rest of the season is expected to bring more of the same, with both above average temperatures and above average rainfall expected to continue through the end of September, according to the National Weather Service.