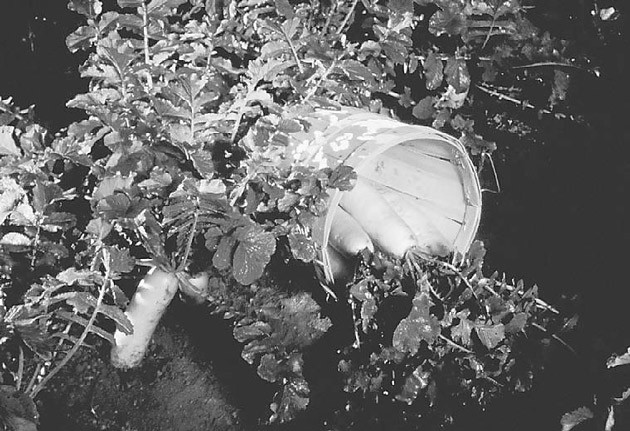 Daikon, a type of radish, is not a very familiar vegetable in the US. It has a stronger flavor than the typical small red radish, although the flavor can range from pungent to mild. They are much bigger than our traditional radishes and more closely resemble turnips.

As a child, when I thought of vegetables I ate, my scope was pretty limited. It included beans, peas, corn, beets and sometimes carrots. Stretched a little, it might include winter squash and some “salad vegetables” like lettuce, tomatoes, cucumbers and cabbage.

Today, other vegetables have grown in popularity and we may now include cauliflower, broccoli, the summer squashes, asparagus and eggplants to our vegetable palate. Asian vegetables are aptly termed ethnic foods, but in recent years, they have made a strong showing as part of American cuisine. Five Asian vegetables are particularly popular. Three are transitional crops — which means they are most readily available in the spring while two are summer vegetables that provide a bountiful harvest in the fall. The spring vegetables are Daikon, Pak Choi (Bok Choi) and Snow Peas. Eggplant and asparagus beans (yardlong beans) are the summer duo.

Daikon, a type of radish, is not a very familiar vegetable in the US. These radishes have a stronger flavor than the small red ones we put into our salads although their flavor can range from pungent to mild. They are much bigger than our traditional radishes and more closely resemble turnips. They are usually long and narrow and creamy yellow, white or green. They may be two to three inches in diameter and from six to 15 inches long, but they may also be round and have the crisp texture of a turnip.

Peel and slice Daikon raw to serve as an appetizer with dip or in salad or treat them like turnips — boil or grate them into a stir-fry. Daikon greens are also edible if picked when young and tender and sautéed like turnip greens.

They store several months in a cool place like a refrigerator, root cellar or cool basement in damp sand. If you do not have good storage conditions, blanch and freeze them.

Pak Choi or Bok Choi has been on the Eastern Asian menu for thousands of years. The Celts made the connection and brought the vegetable to the British Isles. Pak Choi was popular in the European diet until the late 1800s but came to the United States in the 1900s. The leaves are dark glossy green, but chefs value the plant for its thick, white, tender stalks that form the petioles and main veins of the leaves. A miniature variety grows with green tender stems.

Pak Choy looks something like cabbage and is sometimes called celery cabbage, Chinese celery and Chinese mustard cabbage, but it is most closely related to mustard. Do not let that reference to celery fool you either — these leaves are not fibrous like celery. They are tender and make a great addition to stir-fry. Pak Choy is so commonly used in Chinese cooking that Chinese cooks consider it a stock ingredient in many dishes. Shred tender stalks to add interest to Cole slaw with other types of cabbage, or cook the leaves like you would spinach, beet greens or other greens.

You may acquire loose leaves early in the season, but with time, the plant forms a head. Headed varieties can be stored in the refrigerator or for a week or so in a cool cellar. They will keep for several months if harvested root and all, placed in a cold frame, and covered with straw and dirt. Blanch and freeze to add to soups and stews. Snow peas are very familiar to us as edible pod peas. They turn up in frozen food sections by themselves, as part of stir-fry mixes, and fresh on salad bars and in the produce section of the grocery.

Peas appear to have originated in the Mediterranean and were grown widely in England and Europe in the 19th century. They came to be known as English sugar peas in England and the US. The Chinese adopted these peas into their cuisine from the English and they have been known as Chinese snow peas ever since. Snow peas have light green pods and are true legumes. Snow peas are picked as tiny peas just beginning to swell in the pods.

Eat the sweet, crisp, tender pods whole — either raw or steamed slightly or sautéed. The pod is edible and tender because it is missing the inner membrane of regular peas. The Chinese consider the leaf buds and tender shoots, (called Dow miu) a delicacy.

For the most intense sweet flavor, eat them or blanch and freeze them as soon as possible after picking. They will keep in the refrigerator for up to two weeks, but they quickly lose their sweetness.

Eggplant is not particularly new to American diets, but the Chinese and Indians of India began planting them in the fifth century AD. As the vegetable was introduced to other parts of the world, other civilizations both embraced and misunderstood it.

Arabs introduced eggplant to Spain where it became popular as an aphrodisiac in the 12th century. They found their way to England and Italy in the 16th century, but strictly as ornamentals. The English and Italians thought they would cause madness if consumed — perhaps because of their botanical relationship to deadly nightshade.

Eventually people began to understand the difference, as evidenced by the hundreds of cultivars now available around the world.

As an Asian vegetable, expect smaller fruits on smaller plants than the traditional types we typically grow. The glossy black, white, lavender, pink, purple or green fruits are long and slender, usually about two inches in diameter and up to nine inches long. Asian eggplants are milder and have a more delicate flavor compared to American and Italian types. Their skin is very tender and does not need peeling. Eggplants do not store well, so eat them as fresh as possible. Refrigerate them no longer than a few days. They do not freeze well by themselves, but mix them into a favorite dish and they store nicely in the freezer. Grill, fry, roast, pickle or stir-fry them.

The asparagus or yardlong bean originated in southern Asia, but its use has spread to the rest of Asia and Europe. It is just coming into its own in the United States. These specialties are not always available in the supermarket — you may have to cultivate your own to enjoy them.

They grow on twining stems that resemble pole beans, but they are more closely related to southern cowpeas. Although they will quickly grow to a foot long and will reach three feet as they ripen, pick them when they are about half the diameter of a pencil for best flavor and texture.

They look something like snap beans but taste more like asparagus — hence the name. Their flavor is more intense than snap beans and they are not as light textured. They lend themselves to stir-fry or steaming. If you do grow them and leave them on the plant until they thicken, lighten up and the beans inside the pods turn black or red, you can shell and cook them like southern “peas.”

Yardlong beans, like snap beans, will keep several days in the refrigerator, but they lose quality. For optimum flavor, eat them soon after harvesting or blanch and freeze them for winter eating.