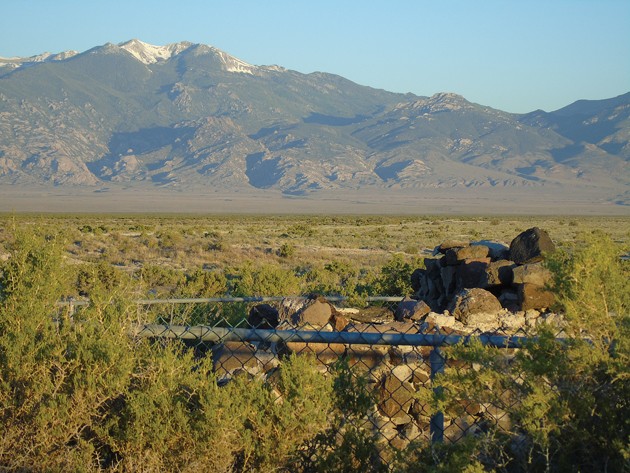 In the foreground are the remains of the Pony Express Trail’s Boyd Station with the Deep Creek Mountains and 12,020 foot-high Haystack Peak in the background. (photo courtesy Jaromy Jessop)

July 13, 2017
At Hot Springs Cave, the Pleistocene epoch unfolds for you

Editor’s note: This is another installment in a multi-part series on exploring the Pony Express Trail through Tooele County. Last week’s article entailed a purported battle between Army troops and American Indians in the West Desert.

As you drive around the northern end of the Fish Springs Range on the Pony Express Trail, you may notice a dirt road on the left that leads up into sagebrush and rocks and ends abruptly below what appears to be an old mine entrance.

Several weeks ago, as the sun was going down, I parked my truck at the end of this little spur and hiked an old, rocky footpath to the opening. Along this stretch the tall sagebrush, salt bush and other plants had spider webs connecting one to another. It was perfect terrain for rattlesnakes, so I walked carefully.

Once I reached the opening, I found that it was not a mine at all. An interpretive sign was there, but it was unreadable due to desert weathering. I then remembered back about 15 years ago when I visited this spot and took photos.

When I returned home, I dug up my old photos and there was one of the sign, which was readable at the time. It said: “The first human occupation of the Fish Springs Marsh can be traced to the gradual evaporation of Pleistocene Lake Bonneville around 11,000 years ago and the formation of the marsh.”

It further explained that archaeological and botanical evidence from the cave suggests the people who lived there were hunter gatherers and depended on the plants and animals of the marsh and surrounding mountains for survival.

The cave is named “Hot Springs Cave” and was listed on the National Register of Historic Places in 1981. The name may come from Wilson’s Hot Springs that are to the north in the flat, and which according to some sources, was home for a group of hippies in the late 1960s who lived in an old bus and installed bath tubs near the springs to collect hot water.

Hot Springs Cave and other historical markers and places in the desert have been heavily vandalized because vandals think it’s neat to destroy our history. Thankfully, a stout fence has been placed at the cave to protect it from further vandalism.

While standing at the cave’s mouth, watching the sunset over Dutch Mountain to the northwest, I heard crickets begin to chirp and a few night birds call in the warm desert air. There is a large, black rock overhang just above the cave’s entrance. I looked closer and noticed several webs on it with large spiders. I thought, “Some bugs are gonna die tonight.”

Despite the spiders, it was beautifully peaceful. I was alone and thought the archaic people who lived here thousands of years ago had a good front porch view. I could see Pilot Peak to the north across the salt desert flat as the red sun set over the Gold Hill area to the west.

Carried by an occasional breeze, the sagebrush smelled good in the dusk air and stars began to appear in the sky. I wondered who the cave’s inhabitants were and what their lives were like. At its greatest depth, Lake Bonneville surely submerged the cave, but when it was occupied, the water was likely just below the entrance. What a fantastic view the cave dwellers must have had across a massive body of water with Granite Mountain floating in the middle of it like an island. Were these mountains forested back then? What kind of creatures roamed here during the Ice Age? Sabre-tooth cat? Mastodon?

While looking across the big empty of a skeleton lake bed, I suddenly felt that I was not alone. I made my way back to the truck, waving a stick in front of me to clear any spider webs, and drove west on the Pony Express Trail towards Boyd Station. You have to be alert along this stretch because the road has several steep pitches and blind curves where oncoming traffic isn’t visible. Therefore, I always hug the side of the road to prevent a head-on collision with an unseen vehicle.

The northern end of the Fish Springs Range is an intriguing place. There is a little valley with rock spires10-20 feet tall that stick up out of the ground like old wrought iron fence spikes. As you round the mountain and enter Snake Valley, the road hugs the mountainside. At this point the magnificent Deep Creek Mountains come into view, rising 7,000 feet from the valley floor to the highest peaks,

Those peaks are 12,087 foot-high Ibapah Peak and 12,020 foot-high Haystack Mountain. They are joined by several other sub peaks that are over 10,000 feet high. The mountain range’s forest consists of seven different types of coniferous trees, and cool tiny streams that flow through canyons with towering rock walls. Ibapah is an American Indian word for “Clay Colored or Deep Down” water. The Deep Creek Mountains must have been a stunning sight to early travelers and Pony Express Riders as they crossed Snake Valley towards Willow Springs.

I reached Boyd Station and by then the sun was completely down. I parked my truck, got out and stood there amazed at the empty desert and the billions of stars that covered the sky from horizon to horizon. It was about 11 p.m. but it was stll 73 degrees. The mosquitos found me so I bedded down in the back of my truck to hide from them. It was uncomfortably hot for a few hours, but when I woke up around 5 a.m. it was cold. The temperature swings from daytime highs to nighttime lows in Tooele County’s West Desert can be dramatic. If you go out there, take a jacket even if you don’t think you’ll need it.

If you drive to the West Desert, be prepared with a full tank of gas, plenty of food and water, and a good spare tire. Out there you are on your own without cell phone service. Please be respectful of the historical and natural features of the desert so they can be enjoyed by others. Next week’s article will explore mining activity in the Fish Springs Range and the old Boyd Pony Express Stage Station.