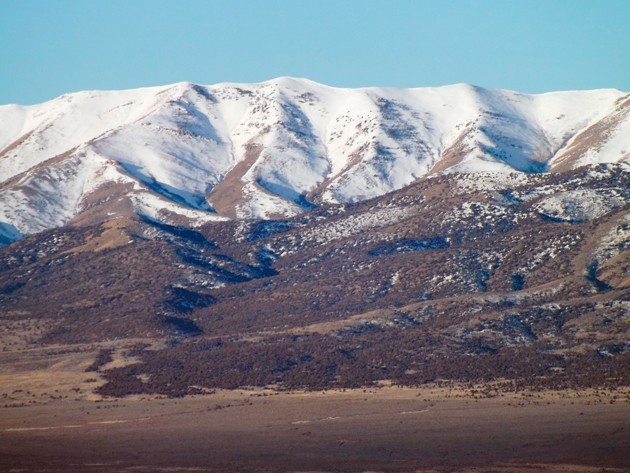 Onaqui Mountains as seen from the slopes of the Oquirrh Mountains.

March 6, 2014
At Mercur cemetery, who are these forgotten people?

I was at Camp Floyd last week putting together a staff ride for the University of Utah when I decided to return via state Routes 73 and 36 to the Tooele area. It was a pretty day and it had been awhile since I’d driven that stretch. Along the way, I made a few stops.

First, I stopped at Five-Mile Pass. If you have a 4X4 vehicle or ATV, this is a great place to ride. There is a variety of terrain in and out of the junipers. I also stopped to climb around in the Thorpe Hills. That experience reminded me of when trucks would drop Fox Company of 2/23 Marines off near Five-Mile Pass and we would conduct night patrols for miles with no light across valleys, through draws and over mountains. Those night patrols gave me a different view of the county I’d otherwise not see.

After reminiscing about my memories of traipsing around the “Country with the Corps,” I continued to the Sunshine Canyon turn off and stopped to take a few pictures. While there I thought about Mercur and how it had been 20-plus years since I last drove up the canyon road to the gate. I turned east off of state Highway 73 and headed up the paved Mercur road. After a short distance I noticed a small turnout on the right-hand side of the road that had a big boulder with a sign on it that read “Mercur Cemetery.” I made a mental note to come back and then continued up the canyon.

The south side of the canyon is covered with thick juniper/ pinion woods that conceal shelves of small limestone cliffs that look like they would make for an interesting exploration. I finally reached the locked gate to the Barrick gold mine property and the distance couldn’t have been more than four miles

As previously mentioned, nothing remains of Mercur because the land it sat on has been literally run through the mill. Years ago I remember a small museum here that was interesting because it had artifacts that were excavated from the town site. I have heard since that the museum has been relocated to Deseret Peak Complex, but I’ve never visited it.

All of these little side adventures convinced me that we were going to campout in the hills that weekend. Even though it was still February, we’d had a pretty mild stretch of temperatures, which some people might even call an Indian Summer. My daughter, Alex, and I loaded up the truck with the dogs and various implements — binoculars, tin foil dinners, bird calls, knives, guns, blankets, and of course, a laptop computer for watching movies once the fire burned down, and headed for the hills.

We camped across the draw from the Mercur Cemetery, probably 1/8 of a mile away because that location gave us a great view down Rush Valley towards the Sheeprock Mountains. It was also on the edge of the junipers so we would have plentiful fuel for the fire.

At this location there was an old fire ring, which we dug a little deeper and ensured it was well lined with rocks to prevent any coals or embers from escaping. We also had a five gallon jug of water on hand and a shovel. You can’t be too careful with fire out in the hills. We then set out our camp chairs and released the hounds.

As the sun started to set, we looked across the draw at the old cemetery that has several dozen graves, each enclosed by old white wooden fences that looked spooky in the half light. As we eyeballed that, we noticed some movement below the cemetery and saw at least a dozen mule deer slowly make their way up the hill. We took out the binoculars and watched them. There is nothing like being completely silent in the outdoors and observing wild animals. There was no wind so you could hear each step of the deer as twigs broke or rocks were disturbed.

As the sun went down it got cold, and we made a respectable wood pile of dead juniper branches and old dried out sagebrush. Before long we had a nice fire to keep us warm. I dared Alex to walk up to the cemetery with me and check it out in the dark, but her feet were frozen — at least that’s what she said, so it would have to wait until morning. We cooked dinner, which was chicken and vegetables wrapped in several layers of tinfoil and then simply put on a bed of coals in the fire. Nothing tastes better than that when you’re camping. The stars were also out and brightly lit – especially Orion with his belt and the Big Dipper standing straight up on its handle over the Oquirrh Mountains.

The fire eventually burned down to coals, so I dumped water on it and buried it with dirt and rocks, and we climbed into the truck shell and fell asleep watching movies. The next morning, I was up well before the sun and even though it was quite cold, it was beautiful. There was a clear blue, icy sky and the silver sage and dark green juniper were half lit by the coming dawn. The dirt was frozen hard and the dogs’ water dish was frozen solid. The mountains that ringed Rush Valley were clear as a bell and every feature could be ascertained.

It was freezing cold so I built a fire. As I stood there surveying the scene, I took a moment to consider the fire — orange flame tips, brown and black wood, and white ash surrounding red hot pulsating coals. Tremendous heat was coming off of this beautiful fire, so much so that you would have to change the aspect of you that was facing it so you wouldn’t burn yourself up. It all smelled of campfire and woodsmoke.

Birds started to call in the trees as the animals awoke with the dawn. I watched eight more mule deer mill around in the bottom of the draw. The tip of 11,031 foot-high Deseret Peak turned bright pink as the sun first hit it. It was a first rate sunrise as far as I was concerned. I finally coaxed Alex and the dogs out of bed after the sun was up. We ate breakfast, put out the fire completely, buried the coals and scattered the rocks. You always want to leave a place in better condition than you find it out in the wilds.

After breaking camp, we went to the Mercur Cemetery turnout where the boulder with the plaque marks a short, steep trail that climbs to the cemetery. Along that path we stopped and I told Alex how to tell the difference between a Pinyon Pine (kind of smooth, pretty, foxtail needles) and a Utah Juniper (scraggly bunches of rough green scales with blue round berries).

At the cemetery, some fool had knocked over a brown sign that announces the place. The ignorance and disrespect of some people astonishes me. Among the graves you are in a mysterious place. There are no headstones to speak of and only rectangles of rock surrounded by white fences. There are nearly two dozen such graves and outside of the group of fenced graves there are lonely rock rectangles — some in groups of three or four, side-by-side and some all alone in the junipers that we surmised may have belonged to Chinese miners or Indians.

Who were these people? Why are they all forgotten? Only one grave has a stone that was legible at one time until another idiot shattered the top of it by throwing a large rock on it or something. From the articles I have found on the web, this is likely the grave of one year-old “Annie C. Jones” who died in 1898. Some well-meaning folks have left dolls and other trinkets by this grave and have placed plastic flowers on most of the others.

We will probably never know the identities of the persons interred at the Mercur Cemetery other than little Annie. As I looked through the trees at the Stansbury Mountains, I thought at least they have a pretty view from their final resting place.

To get to the cemetery, head south out of Tooele on state Route 36 to the junction with state Highway 73, which is about five miles south of Stockton. Turn left onto 73 and follow it past the Ophir turnoff. In a few miles you’ll see a green sign that points east towards Mercur. Turn left and drive east about a mile or so and the cemetery boulder marker is on your right. If you go there, please be respectful and don’t litter.