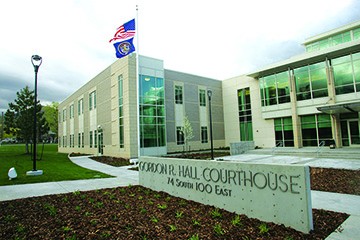 file photo The Gordon R. Hall Courthouse at 74 South and 100 East in Tooele. Utah Courts are moving to the yellow phase of their pandemic plan.

Seven is a lot of murder cases for Tooele County. When Scott Braodhead took office as County attorney eight years ago, the office was handling one pending murder case, he said

“Murders in the county have increased throughout the years,” Broadhead said. “We have had a large spike in the past five years or so.”

The process to prosecute a murder case can be lengthy.

“The process is the same as other felony cases, but the process takes longer because of the complexity of the cases, the seriousness of the crime, and the amount of forensic evidence accumulated and analyzed,” Broadhead said.

Among the seven murder cases in various stages of progress, the oldest case the Tooele County Attorney’s office is working on dates back to 2016.

On July 22, 2016, Jesus Eldon Aragon was accused of murdering his mother in her Tooele home. He is facing charges of first-degree murder and aggravated robbery. Aragon will appear before the Tooele Third District Court in February and a trial date will be set at that time, according to Broadhead.

The murder case process for prosecutors begins after law enforcement agencies submit investigated cases to the Attorney’s office for review.

Then, the defendant appears before the judge for the first time. There they are notified of pending charges against them and are appointed an attorney.

The second step is a preliminary hearing where an evidentiary hearing is held to determine whether or not there is probable cause for the case to proceed.

After this, there is a trial and sentencing if the accused is found guilty.

Anywhere throughout the process a plea agreement may be entered or additional hearings may be set, such as scheduling conferences and motion hearings.

The process could take months to years, Broadhead said.

“The principal reason that murder cases take so much time to go through the system is that there is a lot of forensic evidence to be analyzed,” Broadhead said. “In addition, there is often competency and psychological evaluations performed during the process. All of the processes could be sped up, but it would require more money being put into the system, including more money for courthouses, judges, lawyers, court personnel, lab personnel, and forensic investigators.”

During the pandemic, the court process was slowed substantially for a period of time, but things are back on track, according to Broadhead.

And the whole process is funded by taxpayers.

“I can’t say how much any specific case costs,” Broadhead said. “The more complicated a case is, the more time it requires. So, if there are more murders, then we will need more attorneys and staff to handle the increased workload.”

The state of Utah doesn’t help fund the investigation or prosecution of murder cases but it does provide access to their resources like their crime lab, investigators, and access to other needed equipment.

The cost of the defense of an indigent person — one that can’t afford an attorney — for aggravated murder is borne by the state capital defense fund.

Broadhead explained the capital defense fund as an “insurance policy” that counties pay into based on population. The fund is then used to pay for “certified” capital defense attorneys to assure that defendants receive a fair trial with competent representation.

Other murder cases pending in Tooele County include:

On May 23, 2020, Jack Hakop Keshishian, Wyatt Smelser, and Izaiah Kirkpatrick were accused of killing a man from Sandy and dumping his body near Faust Road. The three suspects are facing charges of suspicion of murder, conspiracy to commit murder, and tampering with evidence.

Keshishian pleaded guilty to first-degree murder. He will be sentenced in February. For Smelser, a potential plea is pending. Kirkpatrick is the alleged shooter and has a preliminary hearing set.

One of the more known murders cases occurred on Jan. 17, 2020 when 16-year-old Colin Jeffrey Haynie shot to death his mother and three siblings over a period of four to five hours. He also attempted to kill his father when he arrived home from work. He pled guilty to the four aggravated murders and attempted aggravated murder, all first-degree felonies. Haynie has a scheduling conference set for Feb. 21. A sentencing hearing will be set at that time.

Perhaps 2022, with four murder cases filed in Tooele County,  saw the most new murder cases in one year for some time.

On May 3, 2022, defendant Brandon Zipperle shot a 23-year-old woman in the back of the head by Five Mile Pass. Zipperle pleaded guilty to first-degree murder and a sentencing hearing has been set for February.

On June 6, 2022, Aaron Visser was accused of physically abusing and causing the death of his 18-month-old son. The child died by blunt force injuries to the head. Visser is facing a charge of criminal homicide-aggravated murder, a first-degree felony. A scheduling conference has been set.

On Aug. 8, 2022, Michael Leroy Patterson was accused of murdering his wife at Settlement Canyon Apartments in Tooele City by shooting her in the head while there were children in the apartment. Visser is facing charges of murder and domestic violence in the presence of a child. Visser has a scheduling conference set for February.

Expenses aside, homicide cases, as well as many other cases handled by the County Attorney’s Office, take a mental toll on prosecutors, according to Broadhead.

“We’re dealing with people at the lowest point of their lives,” Broadhead said. “The things we see everyday — murders, child abuse, assaults — it’s hard to just go home and turn those things off.”

Sometimes it gets personal, according to Broadhead.

“He was my daughter’s best friend,” Broadhead said.

“I remember the case of the young Wendover mother who beat her child to death,” Broadhead said. “I just went home and cried.”