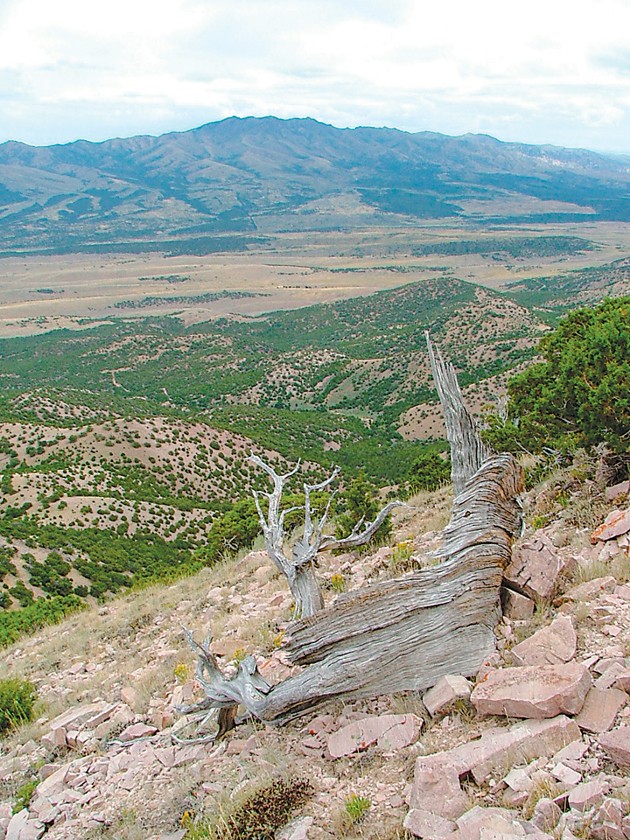 To hike the Simpson Mountains takes preparation on the part of the hiker.

August 1, 2013
Avoid disaster, be prepared when hiking the Simpson Mountains

“Something will have gone out of us as a people if we ever let the remaining wilderness be destroyed … We simply need that wild country available to us, even if we never do more than drive to its edge and look in.”

The Simpson Mountains are a piece of the rugged old west that has been altered little since the times of the Pony Express. They are wild, inhospitable, somewhat hard to get to and even harder to penetrate without a 4X4 vehicle.

Once you get above the baked juniper choked canyons and foothills, the range takes on a different character. This is especially true in the southern half of the range above Death Canyon, where the peaks are windswept and bald higher up and have the appearance of higher mountains. There are many areas in the range where tan colored streams run year round at the bottom of deep sagebrush choked and sandy ravines.

While the range appears destitute from the Pony Express Trail, it actually has all of the typical desert range inhabitants you would expect to find: Mule deer, pronghorn antelope and wild mustangs call the Simpson Mountains home. Cougar patrol the range and while you will probably never see them, they see you.

The ghostly coyote appears seemingly out of nowhere at times, pauses to give a disinterested, almost creepy stare at you, and then trots off. Grumpy badgers dig giant burrows in pursuit of prey and excavate elaborate living chambers underground. Jackrabbits, tarantula, rattlesnakes, and horned lizards crawl, scatter and slitter this way and that across the land while the golden eagle and other birds of prey ride the winds above scouting out their next meal. And lastly, because of the availability of water, you will likely encounter range cattle in the canyons.

For those reasons, I don’t just drive to the edge of the wilderness as Stegner suggests. I get right up to the edge and then shoulder a pack, which is oftentimes too heavy, and then head for the high hills, lonely saddles and windswept peaks.

The most picturesque peaks in the range from the Pony Express Trail are the “Indian Peaks.” They loom large over Porter Valley, Government Creek and the Pony Express Trail. For many years as I would drive by the range, I longed to climb their summits and look across the land from that vantage point. I finally got my chance several years ago in the month of August.

My wife, Mishelle, and I began our expedition into the Simpson Mountains by following the Erickson Pass Road south from the Pony Express Trail for a few miles and then took the most likely looking road west towards what looked to be Lee Canyon. Because I don’t rely on GPS, often times when I explore it boils down to a lot of terrain association, guess work and a map.

We followed our chosen two track towards the mountains where we parked just east of the first stream crossing. There is a good open grassy parking spot here near some trees. The crossing was nearly impassible to vehicles so I didn’t chance it. The culvert was badly damaged but someone has installed a couple of railroad ties for traction.

Lee Creek has a respectable perennial flow in this area. We started by crossing it and heading northwest up and over a grassy spur. The grass here was tall and on top of the spur we encountered a burned juniper forest. There were thousands of bleached white juniper skeletons, which looked like they had burned a long time ago. It is a strange experience to walk through such a place.

We then went down and up through a drainage into living junipers and climbed a minor peak traversing east by north around a larger peak, and then we descended all the way down to the canyon bottom between this sub peak and Indian Peaks. There was a small stream in the bottom of this deep canyon. We then climbed straight up the south ridge to the summit of the southernmost and tallest point on the Indian Peaks ridge.

There were great views, better than I had imagined, all around from the summit, especially towards the Onaqui and Sheeprock Mountains. Poor Mishelle had the wrong type of shoes on and got terrible blisters, but she said, “Bull crap! I’m making it to the top.” The summit marker was stamped “SKULL 2.” The way down was really painful for Mishelle on her blistered feet. At the bottom of the canyon we found a road and followed it for a bit until we ran out of water, which is something you never want to do in the desert. We decided that if we did not reach water soon, we would be in serious trouble. It was 100 degrees and no clouds anywhere.

I decided that Mishelle would take what water we had left and continue down the road we were on, and that I would strike across country through the juniper forests and numerous ravines to the truck. I went up and down through the ravines and junipers, and after about a mile and a half, I stumbled down the ridge above where the truck was parked. I was nearly delirious from the heat. I then got in the truck and raced down the bumpy roads to find Mishelle.

I was so worried that she was lost in the desert and out of water. I then saw her as I rounded a bend in the road. She had walked down several miles and was in pretty good shape and spirits. I was so glad to see her. This was a serious near miss with disaster out in the desert. I harp on taking enough water if you go out in the wilderness and this is why. We thought we took enough water, but our calculations were off. Should we have split up? I’ve heard of many stories that end badly when people do, but when you are in a difficult situation, you have to weigh the options and consequences and make the best decision you can in a timely manner, and then be decisive in its execution.

From that point on I made it a rule of thumb to calculate how much water I think I need and then I double it. I always have water in my vehicle as well now. In case I run out on the trail, I know that I have some water left in my vehicle if I can get to it. Proper footwear will also prevent much suffering.

The Indian Peaks and the Simpsons in general are a rugged and unforgiving wilderness. If you attempt to summit them, realize that there will be long walks along dirt roads from any approach and that there are no trails to any summit. You may be able to find a section of a deer trail here and there, but these trails never seem to go where you need them to.

To get to the Simpson Range, follow SR 36 south out of Tooele to a point just north of the town of Vernon where the Pony Express Trail heads west. Turn right and follow the express trail over Lookout Pass and down into Skull Valley. When you reach the Erickson Pass road junction, the Indian Peaks will be looming large to the west/southwest. From here, follow your nose to the edge of the mountains, dismount and go in.

A trip out into the Simpson Range is true outdoor adventure. Be prepared so you can avoid disaster, and then enjoy the solitude and vacation from the hustle and bustle of everyday life that they provide.