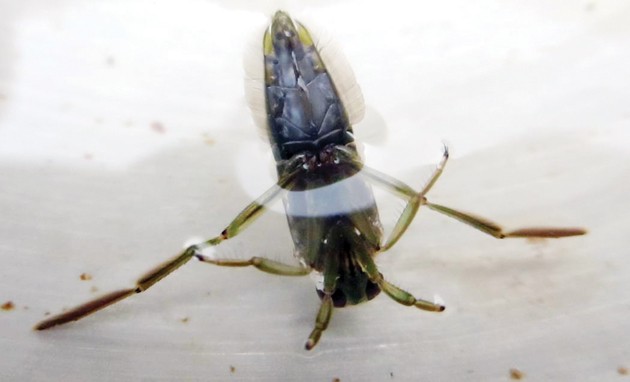 This backswimmer was caught in a marsh near Settlement Canyon Reservoir. After being photographed, it was released unharmed in the waters where it was originally found.

Generally found in still, fresh waters, the backswimmer is an aquatic insect that is commonly found thriving in marshes, ponds, lakes, and sometimes swimming pools.

Backswimmers were given their name for their habit of swimming on their backs, but are also referred to as water bees or water wasps due to their bites that feel like bee stings to humans. Humans are usually bitten by backswimmers when they try to remove them from the water by hand or otherwise mishandle them. Though their inflictions are painful, they are neither deadly nor poisonous.

Backswimmers are most recognized for their noticeably long oar-like legs, which enable them to swim in fast bursts of speed. While possessing swiftness, defensive behavior, and sharp proboscises, the backswimmer skillfully evades predators, but is also a malicious hunter when pursuing prey. The backswimmers also have advantages of color camouflage, wings for dispersing to new habitats, and their own breathing technique so they may remain submerged for long periods of time.

By sensing the water ripples of a swimming or struggling victim, backswimmers are known to devour tadpoles, smaller fish and aquatic or drowning insects. By rushing potential prey, backswimmers will grasp then restrain the struggling victim by using their forelegs, then impaling them with their beak-like mouthpart. After being pierced, the creature is injected with a toxin that melts its insides, which are then sucked away and fed on by the backswimmer.

The body colorations of a backswimmer vary, for there are several different species worldwide. Commonly however, backswimmers possess two different body colors on each side of their bodies. One side is intended to resemble the water’s surface and the other to resemble the bottom of the water, a great advantage when they’re going to the surface to breathe, pursue prey or are resting on the water’s bottom.

Because backswimmers swim on their backsides, it is their dark-colored underside that faces towards the surface. This makes them hard to be distinguished by predators that are watching from the surface, as their dark colors purposely resemble the bottom or floor. As for their backsides, they are light-colored and are meant to resemble the surface of the water and sky. Because their pale back faces towards the bottom of the water when swimming, they can safely lurk the waters and can usually remain unseen by both prey and predators.

Backswimmers also possess lungs and require oxygen, so it is necessary that they return to the surface to breathe. However, backswimmers can remain underwater for up to six hours by collecting and storing a bubble of air underneath their wings and at the tip of their abdomens. When backswimmers need to refresh their air supply, they simply float to the water’s surface to collect it, and then will retreat back down into the depths. Other times they can be found floating on the surface or seen just right beneath the surface. In both cases, they are ready to retreat when approached or disturbed.

It is common for backswimmers to leave their habitat in order to search for a new one, and they do this simply by getting out of the water and flying away. Backswimmers are known to do this several times when necessary, but will also leave the waters when looking to mate, which occurs out of the water. Male backswimmers attract mates by rubbing their front legs against their rostrum to create a sound. Mated females will return to the water to lay no more than 10 eggs on submerged vegetation. Sometimes instead of simply laying their eggs on the vegetation, they will insert them into the leaves or stems.

Backswimmers are known to be attracted to lights. In swimming pools, one or more can be seen at times near the underwater lights. Backswimmers generally grow to be less than 0.6 inches in length. Some species of backswimmers can be found swimming under the ice during the winter.