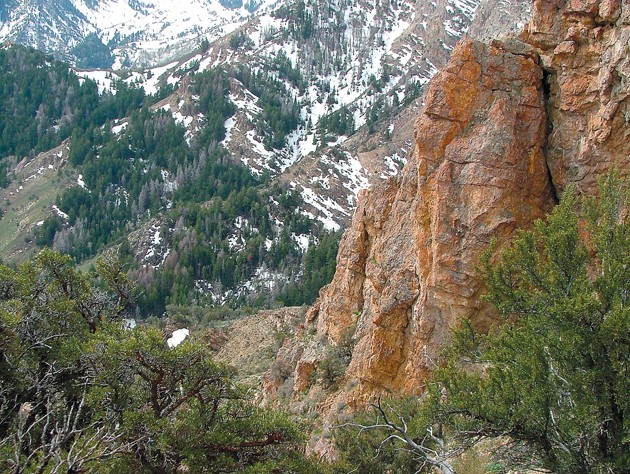 View south of Stansbury Mountains during my descent of the east face of Baker Peak. Some of these spots were a little sketchy.

There is a seldom-visited summit in the Stansbury Mountains that is well worth the effort if you are looking for adventure, scenery and solitude.

Peak 8,564 at the head of Davenport and Baker canyons is the summit I am referring to. I call it “Baker Peak.” It is a prominent rocky knob on the summit ridge of the Stansbury Range that is usually free of snow by mid-May of each year.

I have wanted to climb Baker Peak for years, often admiring it from Onaqui Peak in the high areas above West Canyon. I got my chance a few weeks ago and it was one heck of a hike.

To get to the recommended starting point, turn left and south off of Main Street in Grantsville onto S. West Street. Follow this road, which is also called the Mormon Trail, south for approximately three miles until you see the turn off for North Willow Canyon. Turn right and proceed west on this road to the base of the mountains.

The road will eventually veer to the south towards North Willow Canyon. But keep straight and head up Davenport Canyon about a mile or so until you come to the Stansbury Front Trailhead signboard. This is where I always park when I go to Davenport Canyon to hike. You could drive higher up, but the road gets rough, and it shortens the hike.

I was on the trail before sunrise and it was pretty to watch the canyon brighten with the coming daylight. Not far from the trailhead, the canyon road, which is Forest Road 542, crosses the creek and there is usually water running in the stream here. On this day in early May, there was a good flow and I had to choose my steps carefully because I didn’t want to soak my feet early in the hike.

I continued up the canyon, admiring the bright green early season growth, which formed a shin-high carpet within the forest. There is a flower that grows in great numbers along this stretch in the months of April and May called Glacier Lily. These flowers are bright yellow and have a bonnet shaped head that stares down at the ground. Along with Blue Bells and Red Indian Paintbrush, the Glacier Lily has to be one of my favorites.

The forest in the canyon bottom along the creek is an interesting mix of cottonwood, Douglas fir, white fir, mountain mahogany, juniper and aspen. Because the Stansburys are a dry range, the south-facing slopes typically don’t have many trees on them, while the north- facing slopes are quite covered. The differences in heating on the south and cool temperatures in the shade on the north are responsible for this phenomenon.

Continue up the canyon and you eventually come to a point about a mile from the trailhead where the road splits. The left fork takes you into the thicker forest that is protected by towering ridges. The right fork dips down abruptly, crosses a small trickle of a creek and then continues up the canyon. I always take the right fork and follow it until it peters out at the head of the canyon. You should pass a water trough on your left along the way.

Where the road ends is where the fun begins depending on your skill level. There is a decent remnant trail higher in the bowl, but I have not been able to find the connection with the end of the road. I always resort to bushwhacking up the middle of the drainage and then veer a bit to the right and north and I come onto the trail. Once on this trail, which might be nothing more than a mule deer super highway, it is an easy thing to follow to the summit ridge where you can look down into Monument Canyon and out across Skull Valley.

Following the trail, I admired the rocky spires and rough terrain of upper Davenport Canyon. These spires look like the bishop or pawn pieces on a chess board with random large Douglas fir interspersed here and there. I then noticed a mule deer in the bowl and I decided to see how close I could get to him before he saw me. The wind was right and I probably got to within 100 feet before he noticed me. I took some pictures of him and then continued along the trail, pushing him in front of me up the drainage.

I finally reached the crest of the ridge and had an amazing view down into Monument Canyon. I am really drawn to the pocket forests that cling to the west faces of the Stansbury Mountains. I think it’s because they are relic forests that really shouldn’t be there anymore. It is nice to follow a deer trail through them and see all the pine cones and twigs on the forest floor. It is a completely different setting from the bleak and desolate waste lands of the desert far below to the west.

From my crest overlook, I decided that peak 8,326 to the south, which is a prominent rocky point, looked interesting so I deviated and climbed that summit. After that I made my way across the ridge tops, over snow cornices and piles, through scrubby trees and patches of prickly pear north to the summit of Baker Peak. Once on top, I was not satisfied with that accomplishment either, so I continued north along the ridge to the north peak of the mountain where I ate my lunch.

I took in all of the amazing views and then decided to descend the face of Baker Peak into a sub branch of Davenport Canyon to knock a few miles of distance off of the return. Unless you are an expert hiker and used to dealing with scrambles and exposure, do not attempt to descend the peak via that route — rather follow the ridges back the way you came.

If you are hiking early season, use caution when walking along the ridge top snow cornices. These snow fields make travel a lot faster, but they can be unpredictable, especially while melting, and could give way at any time.

As with all hikes I’ve described, be prepared, know your limits and if you are uncomfortable with tackling the steep ascent of the headwall and peaks, just be content to enjoy the beautiful walk through the canyon bottom. Recommended maps for this area are the USGS 1:24000 “North Willow” and “Salt Mountain” quads. Get out there and enjoy this gem of a place that is only minutes from most communities in Tooele Valley.