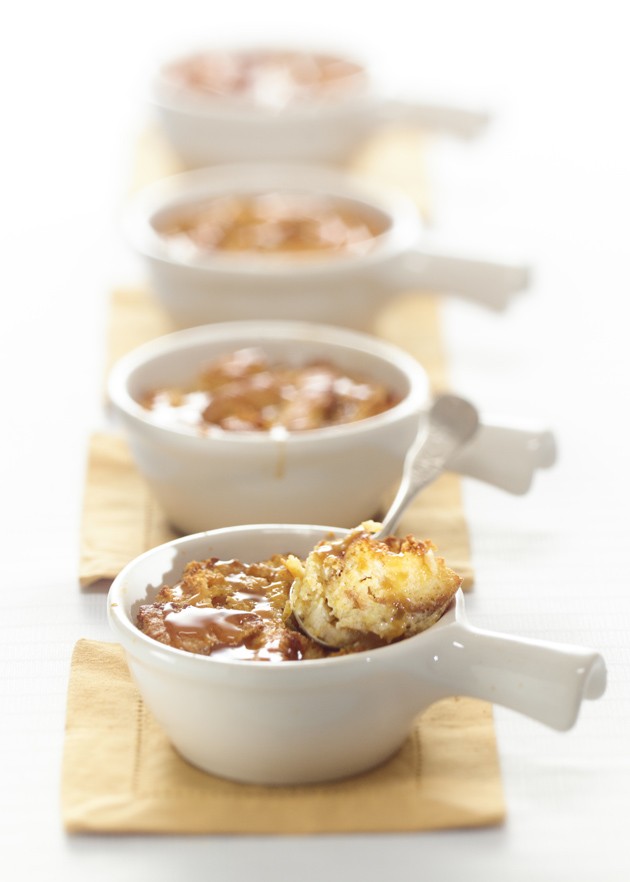 When faced with a couple of ripe bananas and leftover cornbread, we decided to turn them into a version of one of New Orleans’ most delectable desserts, Bananas Foster.

The original Bananas Foster, intended to drum up breakfast business at Brennan’s Restaurant in the French Quarter of New Orleans, was developed in the 1950s by Chef Paul Blange and named after one of his best customers. It’s basically sliced bananas cooked with butter, sugar and rum and served over vanilla ice cream. At Brennan’s, the dish is prepared tableside. Before the bananas go onto the ice cream, rum is poured into the sauce and ignited, a step we decided to skip. However, with a minimum of effort, we were able to transform the original ingredients into an astonishingly good bread pudding fortified with cornbread and served with ice cream and a drizzle of caramel sauce.

We’ve always had a weakness for anything pudding and have no trouble believing that people have been feasting on bread pudding for centuries. Long before comfort food became the rage, frugal Colonial cooks were setting aside stale bread and milk about to go sour to make puddings. Earlier puddings, which bore absolutely no resemblance to our banana pudding, were made from floury pastes stuffed into cloth bags and cooked for hours in big pots of boiling water.

We promise ourselves that the next time we get to New Orleans, we’ll head to Brennan’s for Bananas Foster.  In the meantime, we are more than happy to trade the pyrotechnics for a deliciously old-fashioned Caramel Banana Cornbread Pudding.

Corn muffins or leftover cornbread make this decadent dessert—reminiscent of Bananas Foster—a snap. Be sure to crumble the muffins into large chunks. Serve warm with vanilla ice cream or caramel sauce.

Look for Relish magazine, celebrating America’s love of food, each month in Tooele Transcript-Bulletin. For more Relish recipes, to sign up for our newsletters or to leave a note on our message boards, log on to relish.com