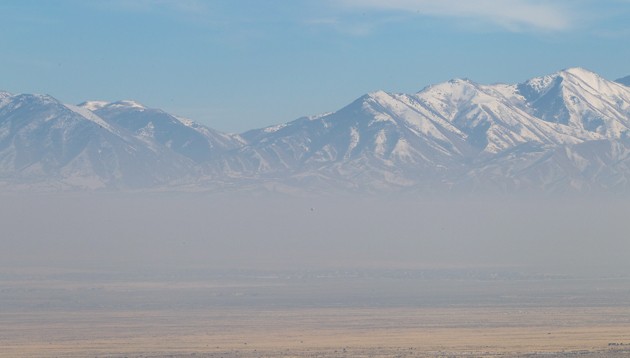 Smog obscures the view of the Oquirrh Mountains. The governor has proposed to include Tooele Valley in a nonattainment area for ozone.

State air quality officials recommended Tooele Valley be included in a proposed nonattainment area for ozone with barely a word to local officials.

According to a county-by-county analysis published by the Utah Division of Air Quality in September, Tooele Valley was included in the boundaries because commuter traffic from the valley contributes to high ozone levels in Salt Lake, Weber and Davis counties.

However, on its own, Tooele Valley tends to have less ozone pollution than the federal standard, according to data provided in the DAQ analysis.

Bateman first heard the valley might be included in a nonattainment area for ozone a couple months ago, when a DAQ spokesman gave a presentation at a regional meeting.

“When I heard it from the DAQ, they basically said they were going to meet with the county commissioners before the recommendation was sent,” he said. “The next thing I know, they’ve already sent the information to the governor’s office with a recommendation to move forward. It’s just kind of disappointing. I put it on the DAQ for not following through.”

Another concern Bateman has with the recommendation is how being part of a nonattainment area could affect the local economy.

“The thing I worry about is when you make a place nonattainment in certain air standards, it might hurt, there might be some companies that might not want to come because the air quality is considered nonattainment,” he said. “Our goal as a county commission is to bring more jobs to Tooele County so people don’t have to commute to Salt Lake.”

“I understand the concern of a recommendation that includes Tooele Valley,” he said.

However, even if the U.S. Environmental Protection Agency chooses to adopt the state’s recommended nonattainment areas without any changes, Baker doesn’t anticipate the DAQ will have to change any of its existing pollution controls to meet the federal ozone standard of 0.70 parts per million.

“Our level of nonattainment will likely not necessitate a State Implementation Plan (SIP) for ozone along the Wasatch Front,” he said in an email. “We will, however, have to show the EPA through modeling and permitting that we are not making the ozone problem worse. This is called conformity. …

“The things we are doing to improve our wintertime air are already helping us clean our air in the summer. We don’t expect to place additional rules and controls in place solely for ozone at this time.”

In addition, local officials and members of the public will have a chance to comment on the proposed nonattainment areas before the EPA finalizes them. A 30-day public comment period will likely take place during the second week of June 2017, according to Baker.

The Northern Wasatch Front nonattainment area, as proposed by Gov. Gary Herbert on Sept. 29, encompasses all of Salt Lake and Davis counties and some of Weber and Tooele counties.

The EPA must notify the state no later than June 2, 2017 if they intend to accept the governor’s recommendation. Federal officials will then publish their proposed nonattainment areas for Utah and go through a public comment period. After that, the EPA has until October 2017 to finalize the area designations, Baker said.