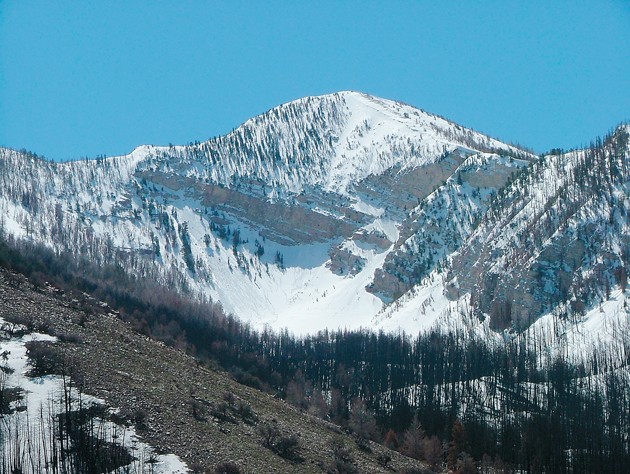 West face and basin of 10,685-foot Stansbury Peak as seen from upper Big Pole Canyon. Once lush stands of dense sub alpine forest in this bowl are now charred matchsticks rising from a moonscape of ash.

September 5, 2013
Be in the best of shape for Big Pole Canyon

In last week’s article, we left off with my dog, Duke, and I exploring a pocket forest perched on a table high on the western slope of the Stansbury Mountains. That is where we will resume the story.

I explored the forest on the table more and then emerged onto some large, dark brown boulders that overlooked upper Big Pole Canyon at about the 8,200 foot level.

From this point a person could easily attain the 10,521 foot summit of North Willow Peak and that of 10,217 foot O.P. Miller Peak in another 1.6 miles. Due to the fact the dense evergreen forest that used to cover these mountains was burned to match sticks, travel over the broken rock should be easy.

My destination this day, however, was to explore Big Pole Canyon. so I descended the cliffs to the south, which consisted of jagged shelves of rock about 20 feet high, each piled one after another with dense patches of prickly pear and occasional mountain mahogany. Duke and I weaseled our way from one rock shelf to the next, on all fours in some places, until we reached the bottom of the canyon.

The canyon bottom was a depressing place. The ghostly charcoal remains of giant white fir, Douglas fir, limber pine and all manner of other shrubbery rose bleakly from the snow. It was a scene of total destruction. It seemed as though I was walking through a graveyard and the ghosts of all the great trees were aware of my passing.

In some places the ash was a foot deep and clouds of it rose with each foot fall. I walked through over a mile of burned out evergreen forest until I reached a gully further down the canyon that, once again, due to prevailing winds and topography, was spared by the fire.

This pocket forest of fir fills a gully on the south side of the canyon. Half of the gully was burned and half of it was spared. Just beyond this point, I crossed a large rock glacier—that is what I call the moraine-like rock gardens found in the mountains. and then I was walking through charred forest again.

After a ways more, I thought I heard the noise of running water, but it was too loud, so I dismissed it. A few more steps and I noticed that there was a small stream running in the creek and the sound of water on rocks was louder. I descended the gully, crossed the tiny stream and climbed up its south bank. On the other side, I discovered a rushing stream at the base of the cliffs.

Duke and I sat below an ancient, old, burned and grotesquely distorted cottonwood and had lunch next to this stream. After that we followed it southeast for about 50 yards to where it was issuing from the base of a rock glacier—literally flowing out of nowhere. After discovering the source of the creek, I continued my descent of the canyon, which must have been quite the lush oasis from Skull Valley prior to the fire.

Dozens of old cottonwoods were burned here along with dozens of white bark poplars, willows, box elder and water birch. At the mouth of the canyon, I discovered the old Iosepa water works and ditch system, which consisted of a rock lined aqueduct about three feet across and two feet deep that had been lined several times with crude cement.

The water gushed into this old ditch through a concrete gate with rusted valves and charged around the bend of the mountain to where logs and debris clogged the ditch and the water plunged over the side down into the creek bed. Beyond this log jam the Iosepa ditch was dry but it made a good walking trail. I followed it down to the Delle Ranch Road where it tied into the larger Iosepa ditch that comes from the north at Chokecherry and Pass Canyons.

These waters once provided the life blood to the colony of Iosepa. I imagined the Polynesians and Pioneer missionaries toiling to build these rock drainage structures along the base of the mountains and in the mouths of the canyons.

All in all this hike was a mixed experience. The carnage wreaked on the forest by the devastating August fire of 2009 left a bitter taste in my mouth as I realized that this place would be the same some day but not in my lifetime.

The table and pocket forest were well worth the effort as the views from that little plateau were amazing. Because there is no trail, the elevation gain is extreme and because Big Pole Canyon offers route finding, boulder hopping and bushwhacking challenges all its own, this hike should not be attempted by anyone other than seasoned experts who are accustomed to back country travel and who are in excellent physical condition.

For those who can rise to the challenge, solitude in this area is a practical guarantee and the opportunities to view wildlife are excellent. A 4X4 vehicle will be required to get to my car park as the road deteriorates greatly beyond Chokecherry Creek. In fact, I recommend parking on the north side of Chokecherry Creek and walking from there. It adds another two miles one way but it is better to walk that bumpy old road than to destroy your vehicle on it.

Good maps are a necessity in this area. The USGS 1:24,000 Quads that cover this area are “Salt Mountain” and “Deseret Peak West.” Do yourself a favor and consult these maps before ever venturing into the Stansbury Mountains on the Skull Valley side. One silver lining concerning this hike was that I did notice the mountain grasses, forbs and some buds on charred trees coming back so the forest will recover. It will just take many, many years.