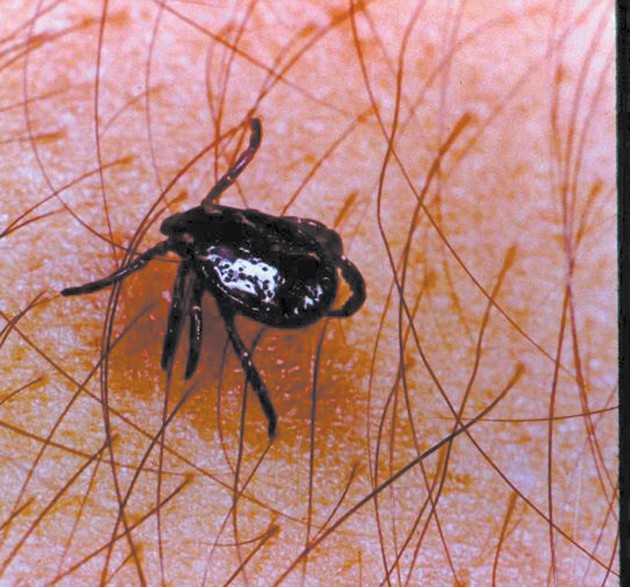 The American Dog Tick, also known as a wood tick, is the most common tick found all across the United States. These ticks can carry Rocky Mountain spotted fever.

“Summer time and the livin’ is easy,

Fish are jumpin’ and the cotton is high”

— Aria composed by George Gershwin for 1935 Opera Porgy and Bess

All that easy summertime livin’ sends many of us

outdoors to do get away from it all. We live in an area where we can easily go fishing, camping, hiking and picnicking. It is all great fun and is a way of life here.

Outdoor activities bring humans up against nature complete with insects and arachnids. A quick review of biology lists insects as tiny creatures with six legs while arachnids have eight. Spiders of all kinds are the most famous arachnids but scorpions, mites and ticks are also arachnids.

With the black widow being the most conspicuous exception — most spiders in Utah are pretty innocuous to humans. They scare some people, eat insects and generally go about their business. Ticks, however, feed on blood so they are interested in biting animals and people. As such, they can become vectors in carrying diseases to humans.

Prior to 1975, ticks were considered a nuisance mostly confined to dogs and pets. Health professionals were aware that they transmitted Rocky Mountain spotted fever, but although it is very serious, it is a fairly rare disease. In 1975, doctors first identified Lyme disease in Lyme, Conn. Lyme disease can be very serious with long-term ill effects.

They describe Lyme disease as “a multi-stage, multi-system bacterial infection caused by the spirochete Borrelia burgdorferi, a spiral-shaped bacterium that is most commonly transmitted by a tick bite.”

It is difficult to diagnose initially because people often don’t know that they have been bitten and symptoms are all over the place. They often include flu-like symptoms, including but not limited to muscle aches and fever, days, weeks and even months later.

An ever widening bull’s eye rash is very typical around the bite, which shows up in less than three-fourths of the cases. With early treatment the outlook is good, but Lyme disease can cause complications months or years later.

The good news is that most tick bites are harmless. While Lyme disease is not unknown in Utah, it is very rare here as is Rocky Mountain spotted fever.

According to the Utah Bureau of Epidemiology, “Lyme disease is found mostly in the eastern and midwest regions of the United States. Most people who have Lyme disease in Utah were actually bitten by a tick from another state. Utah does have a tick species that can carry Lyme disease, however, studies done on these ticks in Utah more than 20 years ago showed that they were not infected. These studies have not been repeated in recent years, so it is not currently known if there has been an increase in Lyme disease carrying ticks. It does appear that a small number of individuals diagnosed with Lyme disease in recent years may have acquired the disease in Utah. Public health is working with partner agencies to evaluate if changes have occurred in the tick populations and/or presence of disease in Utah. It is important to remember than anyone can get Lyme disease, especially campers, hikers and others who frequent wooded brushy and grassy places where ticks are found.”

As I said before, the incidences of infection from tick bites is pretty rare but why take a risk? Use a few precautions to avoid tick bites. Because ticks must remain attached to a person for at least 24 to 36 hours to transmit the bacteria that causes Lyme disease or Rocky Mountain spotted fever, simply removing ticks immediately when you find them is an excellent solution.

Better yet, reduce the risks of being bitten by wearing long sleeves and long pants and spraying exposed skin with an insect repellent containing DEET when you are going into brushy areas. The Department of Defense also recommends spraying clothes with permethrin when going into infested areas.

Avoid wooded and bushy areas with high grass and leaf litter. Walk in the center of the trail to avoid brushing up against brush.

Immunizations against Rocky Mountain spotted fever are available for those who spend a good deal of time in such areas.

In addition, make it a habit to check for ticks when you have been outdoors.

Ticks are generally round and flat, about 1/8- to 3/16-inch in diameter except when they are engorged on blood. Unfed hard ticks like the dog tick and Rocky Mountain Tick are shaped like a flat seed. After eating they may become the size of a grape. The size of a tick is an indicator of how long they have been eating. Soft ticks are shaped more like a raisin before they eat.

They don’t fly, jump or blow around in the wind. They move slowly but are very good at finding their food sources — large mammals. They are able to sense gasses given off by animals and are able to identify often-used paths as places to wait for passing animals. They don’t feed often, but may pass on germs when they do.

A myriad of wives tales are supposed to be the “best” way to remove a tick. They range from putting petroleum jelly or nail polish over the body to “suffocate” it, to treating it with a hot match, gasoline or tar.

The reality is that the best way to deal with ticks is obvious.  Do not use bare hands to handle ticks because their secretions may be infectious

When they are crawling on the outside of clothes, they are easy to remove with masking tape or cellophane tape. The tick will stick to the tape and it can be folded over and placed in the trash.

If you find a tick attached to your body, keep in mind that the mouthparts are barbed and may remain embedded if not removed promptly. Grasp the tick with narrow tweezers as close to the skin as possible and gently, but firmly pull it straight out. Do not twist or jerk the tick.

If you have no tweezers available, grasp the tick with a piece of tissue or cloth to protect your fingers, and pull it out. Dispose of them by putting them in soapy water or alcohol, stick them to tape or flush them away.

Wash the bite area and your hands thoroughly with soap and water and put antiseptic on the place where you were bitten.

If you develop an unexplained illness with fever contact a doctor and report that you have been outdoors in areas where ticks were present or if you traveled to areas where tick-borne diseases are common.