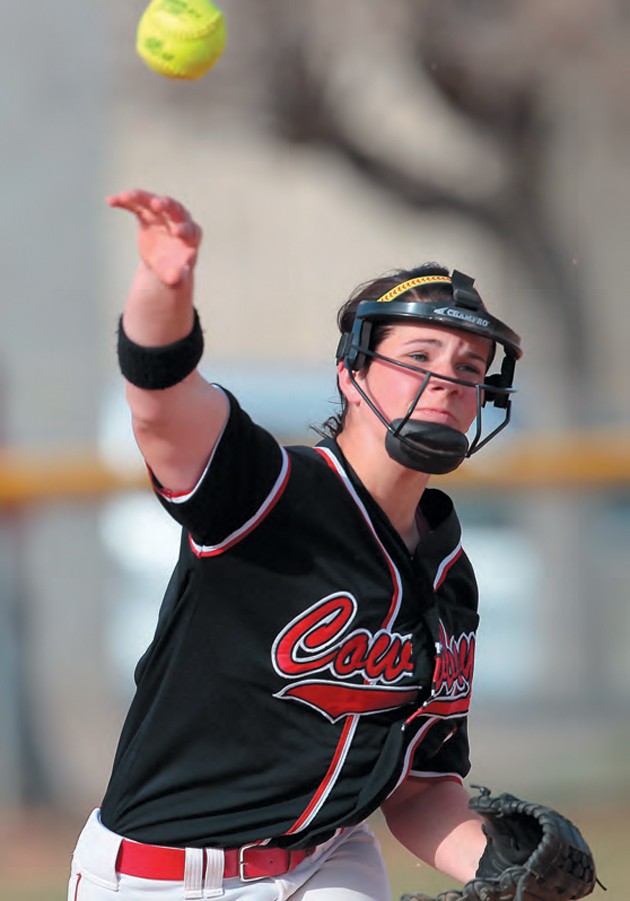 Grantsville’s Laramie Paulick throws the ball to first base March 27 against Tooele. Paulick helped the Cowboys keep it close against Bear River Friday with an RBI.

Grantsville did just about everything they could to come away with a victory at Bear River. The Cowboys jumped out to a 2-0 lead and then when they lost their lead in the sixth, Taylor Waters ripped a two-run home run in the seventh to tie the game at 5-5.

Even with the game tied heading into the bottom of the seventh, Grantsville had the momentum and two outs in the inning. Bear River still had enough to overcome as Aleisha Taylor dropped a single into right with a runner on second to give the Bears a hard-fought 6-5 victory Friday afternoon in Garland.

“The girls were really happy with the way that they played and the way that we practiced for that game,” said Grantsville coach Heidi Taylor. “The girls just played awesome and stepped up their level of play.”

Morgan Summers led Bear River to victory being a tough out for the Bears, using her speed for three singles and scoring on two different occasions in the victory.

Grantsville came out swinging right from the beginning when Waters doubled and then was moved to third on a ground out. Johnson brought in the first run of the game with a double to right-center. Laramie Paulick brought in the second run when she grounded out and Johnson was able to race home on the play for a 2-0 lead in the middle of one.

Bear River didn’t score in the first when they had the chance but the second they were able to get a run in. Tyree Haramoto started it with a single and then made her way to third after Taylor walked and Summers singled. Kassi Fronk brought Bear River within one run on a single to right to make the score 2-1 after two innings.

Grantsville got back into its scoring ways in the fourth when Paulick was hit by a pitch and then pinch runner Autumn Dzierzon came on to run. Dzierzon then stole second and then later stole third and then a Bear River throwing error to third allowed Dzierzon to score and give Grantsville a 3-1 in the middle of four.

Summers was able to use her speed in the fifth to get Bear River within one run. After reaching on a single, Summers stole second and reached third on a ground out. Bear River pitcher Jordan Theurer grounded out to short that allowed Summers to score to make the score 3-2 after five.

The sixth inning is where Bear River was able to grab the lead for the first time. Haramoto started it by drawing a walk and then making her way to second on a passed ball. Taylor followed by ripping a single through the right side of the infield to knot the game at 3-3.

Taylor was later able to score after a Grantsville error on rundown to give the Bears a 4-3 lead. Fronk capped the scoring with a double through the left side of the infield to plate Summers for a 5-3 lead heading into the seventh inning.

a two-run bomb over the fence to keep Grantsville in the game with the score tied at 5-5.

Trying to force extra innings, Grantsville had two outs and Mishae Nelson on second for Bear River. That was when Taylor dropped her single to right that was just enough to score Nelson and give Bear River the 6-5 victory on their home field.

Grantsville will take the week off and then get right back into action on Wednesday, April 11 when they travel to face Stansbury at 3:30 p.m.