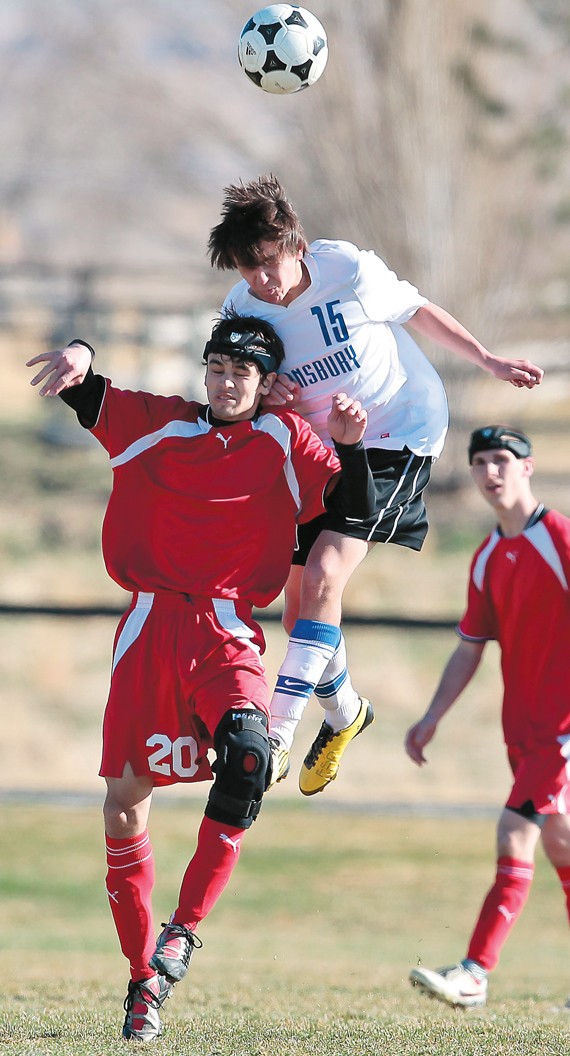 Stansbury’s Josh Gallegos (15) jumps for a header Tuesday against Bear River. The Bears handed the Stallions their first region loss.

Stansbury could only answer the strong forward play of Bear River so many times Tuesday afternoon. The Stallions were able to fire right back in the first half with a game-tying goal from Zach Sharp in the 10th minute. Unfortunately, that would be the final time Stansbury found the back of the net as Bear River added an additional goal in the first half and then one more in the second for the 3-1 victory in Stansbury Park to hand the Stallions their first loss in Region 11.

“I would definitely say that there were some mental lapses on defense for us,” said Stansbury head coach Brandon Andersen. “We just didn’t show up against Bear River and I have been coaching for three years and that is one of the worst games I have ever watched. We just came out flat from the beginning and didn’t bring any game at all.”

Tanner Porter did the most damage for Bear River as he scored a goal in each half and was constantly challenging the back line of the Stallions. Tanner Christensen added the other goal for the Bears in the victory.

Stansbury actually started out the game strong offensively with a couple of early shots in the first four minutes. Sharp and Johnny Calderon each got close enough to take a shot at goal to pressure the Bears’ defense.

About the sixth minute, the momentum started to shift in Bear River’s favor as Craig Barfuss and Tanner Anderson pressured the Stansbury back line. The pressure worked in the ninth minute when Barfuss crossed a pass into the box at the feet of Christensen from close range for the first goal of the game.

Stansbury didn’t take long to respond as Sharp found an opportunity in the following minute from more than 20 yards out. Sharp’s shot bent perfectly into the top right corner of the net to knot the game at 1-1 in the 10th minute.

The best chance for Stansbury to take the lead came two minutes later when Ethan Babcock had a solid chance to score that was faltered by the Bear River keeper in the 12th minute.

From there, Bear River created the better scoring chances and cashed in during the 27th minute. Porter found space on the right side of goal and slipped the ball just inside the opposite post to give Bear River a 2-1 lead that stayed that way for the remaining 13 minutes of the first half. Calderon created a scoring opportunity opening up the second half in the 42nd minute. Calderon found his way down the right side of the goal and placed a dangerous cross into the box. Unfortunately, nobody from Stansbury could put their feet on the ball as it cross the goal harmlessly. Bear River seriously deflated Stansbury’s chances for a comeback in the 48th minute. After a scramble in front of Stansbury’s goal, Porter was able to find the ball with enough space to bury the ball into the net to give the Bears a 3-1 lead.

Stansbury frantically tried to get within one goal and put pressure on Bear River and their best chance came in the 59th minute. Alex Olson had a breakaway chance at a goal that was foiled by the Bear River keeper to maintain the Bear lead at two.

Armando Herrera and Josh Gibson each pressured the Bear River defense with scoring chances but couldn’t break through with a goal as Bear River held on for the two-goal victory. “I think the number one thing that is important is that this game was early in the season where we can learn from this performance and move on,” Andersen said.

Stansbury, now 2-1 in Region 11, will take a break from region games when they travel to Pleasant View to face Weber Friday at 3:30 p.m.