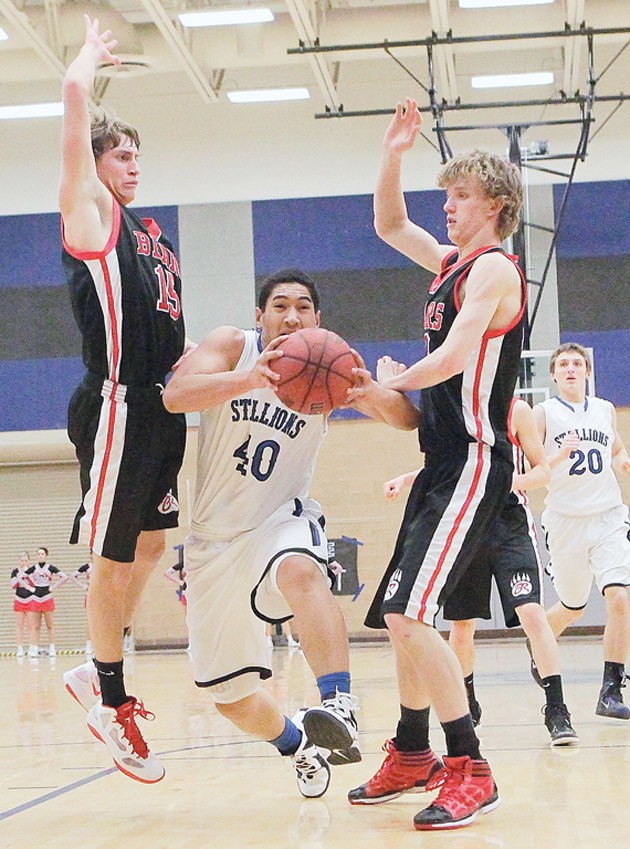 Stansbury High School basketball player Stone Tia (40) drives down the lane Friday against Bear River. Tia poured in 17 points and grabbed three rebounds in the loss to the Bears.

A second close home loss on Friday dropped Stansbury (1-4) to sixth place in Region 11 standings one game ahead of winless Tooele (0-5) and one game behind Ogden (2-3) and Grantsville (2-3) for fourth place. One week earlier the Stallions lost by 1 point at home to Ogden

Ironically, Friday’s 61-56 loss to second-place Bear River was one of the top performances for the Stallions this year, said coach Ryan Harris and the players.

“Really, it was one of our best games of the season as far as executing on offense and sharing the ball. Everyone we had in there contributed to the effort — we didn’t lose anything with players coming into the game,” Harris said.

Four Stallions scored in double figures in a physical slugfest with the Bears, who were whistled for a flagrant foul and technical foul during the skirmish.

The Bears jumped out to an early lead, Stansbury battled back and it was a close battle the rest of the game. The Stallions grabbed a 6-point advantage midway through the third quarter and led by a single point heading into the final quarter.

Bear River scored the first 9 points of the fourth quarter to go up by 8 points and held on to the lead until the Stallions rallied in the final minute to cut the deficit. Stone Tia knocked down his second 3-pointer of the game and Niko Chacon sank a trey both in the final 30 seconds to cut the final deficit to 60-56.

The Bears surged out to a 12-4 lead to start the game, but Taylor Graves got the hot hand from the top of the key with two quick 3-point baskets to slice the lead to 14-10, followed by a bucket inside from Tia to make it 14-12. Bear River’s Wade Miller connected on a 3-pointer to make it 17-12, and then Stansbury’s Cody Barkdull drove in for a score to cut it to 17-14 after the first quarter.

Ryan Robbins kept Stansbury close with his baseline drives for baskets, and as the Stallions kept the heat on, the Bears unraveled a bit with a flagrant foul and then a technical foul. Robbins hit a foul shot and Graves sank two technical foul shots and the Stallions were even at 28-28 with 2:09 left in the first half.

“[Bear River] really play a physical game and that’s my style too — I like to drive hard to the basket,” Robbins said. “On one play I blocked out and the next thing I know somebody’s got his arms wrapped around me and he’s throwing me around, ” Robbins said.

“Bear River plays aggressive and physical; it was the most physical game we’ve played in,” Harris said. “They have that football mentality.”

Stansbury closed out the first half strong with an offensive rebound basket from Tia and two foul shots from Chacon to lead 42-38 at intermission.

Bear River outscored Stansbury 33-24 in the second half to win its sixth game out of the last seven. The Stallions could have used the services of Tanner Barton against the Bears. Barton had 5 points and seven rebounds in the previous game against Ogden, but did not play against Bear River with a hip injury. Barton should be back for the game at Ben Lomond on Wednesday.

Tia scored 17, Graves 12, Robbins 12, Chacon 10, Barkdull 2, Gage Manzione 2 and Luke Richards 1. Graves dominated the boards with 10 rebounds, and Tia had three boards. Tia, Robbins, Chacon and Manzione each had two assists. Manzione and Chacon each had a steal.

After Wednesday’s game, Stansbury plays at Grantsville on Friday.