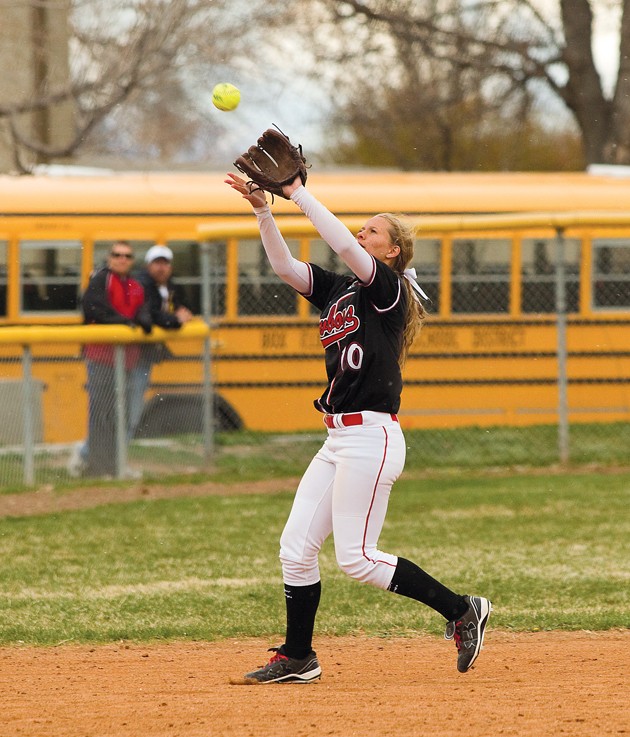 Sarah Sandberg catches an infield fly ball to get the second out in the top of the ninth inning Wednesday. Sandberg also delivered at the plate with crucial RBIs in two different spots to help Grantsville hang tough against Bear River. However, the Bears squeaked out the 11-10 win.

The Grantsville softball team certainly made it interesting with its comeback effort in its region opener Wednesday, but the Bear River Bears prevailed in the end with an 11-10 victory in extra innings.

Twice during the offensive slugfest that featured both warm weather in the middle innings, but then cold and snow flurries in the later innings, the Grantsville Cowboys had to make comebacks.

The latter of the two comebacks came in the bottom of the seventh with the Cowboys’ backs against the wall. Bear River tallied four runs in the top of the seventh to take a 10-7 lead, spoiling Grantsville’s chance to close things in the top half of the inning.

Pitcher Whitney Fields opened the bottom half by drawing a walk, and then Megan Cafarelli hit into a fielder’s choice to replace the runner at first. Autumn Dzierzon followed that with a base hit to put runners at first and second base for Kolbi Jo Meno.

She knocked a base hit to score Cafarelli and make the score 10-8.

Sydney Barney then drew a walk to load the bases for slugger Bailey Critchlow, who delivered with just one out. She came through with a game-tying base hit that scored both Dzierzon and Meno.

The Bears got out of the inning before the Cowboys could end things in walk-off fashion, and they completed the win in the ninth inning.

Grantsville had one last chance after Bear River scored in the top of the ninth. Mariah Sweat stood on third base following a sacrifice fly from Meno, giving an at-bat to Barney with two outs and a chance to either tie or win the game. However, Barney struck out, and the Cowboys lost.

Dzierzon slapped a hit through the legs of Bear River’s second baseman, and then stole second base after getting on. Meno put down a sacrifice bunt to then move Dzierzon to third base. Barney blasted a double to score Dzierzon, and Critchlow walked to have runners at first and second base for Sarah Sandberg.

Following a passed ball that moved both runners into scoring position, Sandberg then delivered the hit that gave the Cowboys the lead. She scorched a double to the gap in left to score both Meno and Critchlow, and that put Grantsville ahead 7-6.

Earlier in the game, GHS coach Heidi Taylor offered encouragement to Sandberg during her first at-bat of the game. Sandberg took a strike and looked over to Taylor, who then instructed that she wanted Sandberg to hit the ball. She said Sandberg earned the right with her recent play to go up and hit the ball, and Taylor wanted the batter to have confidence to swing.

And she did just that with her double to left that gave Grantsville the lead late in the game.

The Cowboys have a chance to get back on track Friday against perennial cellar-dweller Ben Lomond, which lost Tuesday against Tooele 15-0. The Cowboys play on the road in that game Friday. The start time is set for 3:30 p.m.

Grantsville still has seven region games remaining, including two meetings each with Tooele and Stansbury, and the rematch against Bear River on April 18.