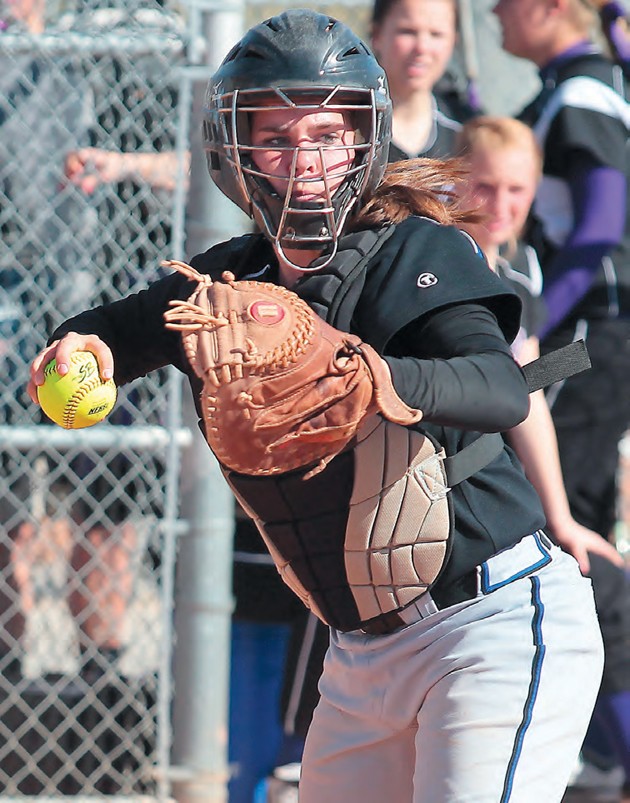 Stansbury junior Jocelyn Kaufman gets ready to throw the ball to first base on April 3 against Tooele. Kaufman made a tag at home plate after a great throw by rightfielder Kilee Christiansen to nab a Bear River runner in a game on Wednesday.

Stansbury shut out Bear River for five innings Wednesday in Garland. Bear River runners did not cross the plate in the second, third, fourth, fifth and sixth innings. It was the first inning that caused all the pain for the Stallions.

The Bears scored all their runs in the opening inning with a walk, two singles and a home run to jump out to an early 4-0 lead. With four runs in and no outs and a runner at third base Beth Chipman came on in relief of Katelyn Robinson. Chipman struck out the next batter and it looked like the Bears would score a fifth run with a fly ball to right. But right fielder Kilee Christiansen made a terrific throw to catcher Jocelyn Kaufman to nail the runner trying to score from third base to end the inning.

The Stallions were able to put runners at the corners in the top of the first inning, but left them on base.

It looked like the shelling might continue in the bottom of the second when the Bears put runners at second and third with no outs. Chipman then got two pop outs and a ground out to leave the Bears stranded.

Bear River pitcher Jordan Theurer rolled through most of the game allowing only four hits through seven innings.

The Stallions finally made some noise in the top of the sixth when Janessa Bassett ripped a single to left. She then raced from first base to third base on a stolen base combined with a wild pitch. Bassett then tried to score by tagging on a shallow fly ball to right, but was thrown out at home plate.

Karlee Manzione led off the top of the seventh with a blast through the left side of the infield. Manzione was forced out at second on a grounder by Abby McIntyre and then a Lindsay Guymon ground out to move McIntyre over to second base. With two outs in the seventh, the Stallions avoided getting shut out when Elise Sutherland smacked a double to deep right field to bring in McIntyre from second base to make it 4-1. A ground out for the third out ended the game.

The Stallions play at Ogden on Wed, April 25 and host Tooele on Friday, April 27.