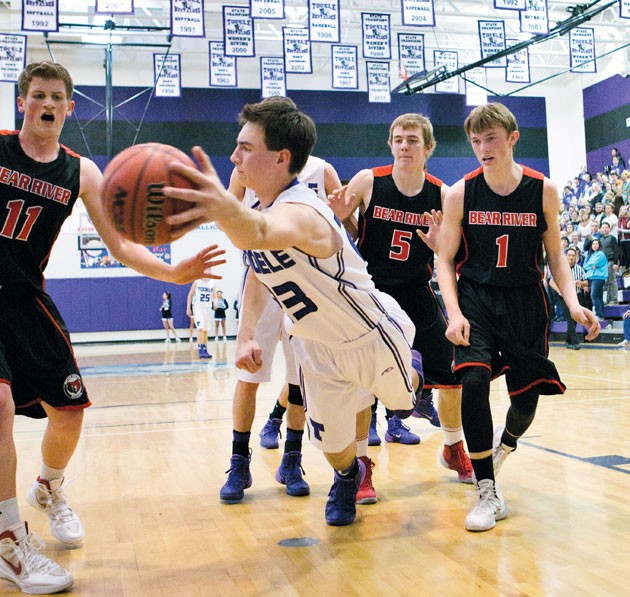 Sophomore Ace Hymas stretches to grab a ball headed out of bounds in Tooele’s 69-58 loss to Bear River. Hymas finished the game with 16 points, eight of which came in the first quarter.

Tooele discovered what Grantsville and Stansbury already knew: The Bear River Bears will dominate the second half.

On the strength of outscoring the Tooele Buffaloes 36-21 in the second half of Friday’s game at THS, the Bears finished off a 69-58 victory to complete the first round-robin of region play undefeated. The Buffs fell to 1-2 with a crucial game against the Grantsville Cowboys taking place Wednesy night. If Grantsville wins, it takes control of second place. If Tooele wins and Stansbury beats Ben Lomond, the three Tooele County schools will find themselves in a three-way tie for second place with four region games left in the season.

However, there’s still the sting of losing to a Bear River team that Tooele handled for two and a half quarters.

“Defensively, it wasn’t so much what [Bear River] did but what we’re not doing,” said THS head coach Shawn Faux. “We had a better week of practice on defense, but give up 33 points the first half and turn around and give up 36 points the next half; you’re not going to win too many high school basketball games giving up 70-plus points a game.”

Faux said his Buffaloes played well, but they didn’t continue doing the things that have helped them, including the things that helped them go into halftime with a 37-33 lead. Tooele led by as many as 10 points in the second quarter at 31-21 before Bear River cut the lead to four points going into the break.

“Turnovers hurt us. Lack of defense hurt us,” Faux said. “We’ve just got to make a couple of adjustments on that.”

Tooele carried over its lead into the third quarter for as long as it could, but the Bears charged forward just too hard.

Justin Pollman found Ace Hymas for a bucket to make the score 39-34. Following a Bear River 3-pointer, Pollmann hit a free throw. Bear River scored another basket to cut the lead to one point, but Tyler Lawrence held serve with a jab step spin to the right that he finished with a jump shot near the free throw line.

Bear River then answered with two straight baskets to take the lead at 43-42. Hymas evened the score at 46 after a made layup where he was fouled. He hit the free throw, but Bear River came back down and regained the lead with a 3-pointer. At 49-46, the Bears never looked back.

Lawrence finished as the Buffaloes’ leading scorer with 18 points. Hymas followed him with 16 points, eight of which were in the first quarter, and Pollmann was the other THS player in double figures with 14 points. Conner Searle scored eight points, and Lincoln Powers scored two.

Faux said he’s pleased with the progression of the sophomore Hymas. He said his progression so early in his career will set an example for the other young players on how to develop properly.

“What you’re seeing is a kid who works hard,” Faux said. “He’s only a sophomore, but he plays more than that because he’s worked hard. What I need is to get everyone, including the younger group and even kids who are coming into this program, they need to see Ace Hymas and what he’s done to improve from last year to this year. That’s what hard work will do. Hard work will breed that confidence. That’s why he’s turned it around. I have nothing but love for the kid. I’m excited about him because I know that this is only the beginning for how good he could really be.”

Faux said Hymas’ talents are night and day difference because he’s a gym rat who lives in the weight room and is committed to shooting and ball-handling.

Wednesday’s road game for the Buffaloes against the Grantsville Cowboys will conclude the first round-robin of region play. Right now, Faux said he’s excited about playing Grantsville, but the Buffaloes are at the point in the season where they needs to win no matter who is on the court with them.

“It doesn’t matter if it’s Grantsville, Stansbury, Ben Lomond or Bear River again,” Faux said, “we’ve got to come out and start playing basketball. [The Cowboys] happen to be the next one on the schedule. We’ve got to come and do what we need to do and really just focus one game at a time. We’ll get these kids to regroup, go to their place and see what happens. I think it should be a good game. That’s what this region is going to be. It’s going to be a dogfight game in and game out.”