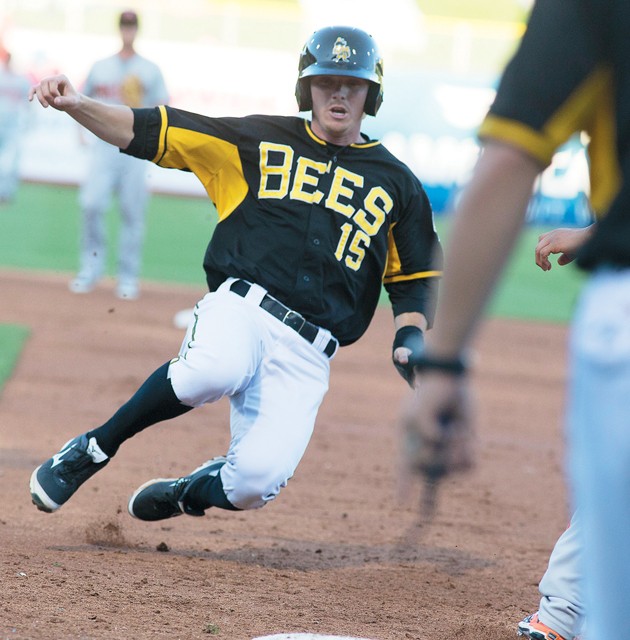 The Bees’ Gary Brown slides back to first base during Friday’s game against the Fresno Grizzlies at Smith’s Ballpark in Salt Lake City. The Bees have gone 4-12 this month to fall into last place in the Pacific Southern Division of the Pacific Coast League.

The Salt Lake Bees continued their miserable June this past weekend by losing four of five to the Fresno Grizzlies at Smith’s Ballpark, sending Salt Lake plummeting into last place in the Pacific Coast League’s Pacific Southern Division.

The Bees (27-38) dropped the series opener 5-4 on Thursday. The Grizzlies then picked up a 6-3 win on Friday in the completion of a game that was suspended on April 24 before clobbering Salt Lake 9-2 in the nightcap.

Salt Lake rebounded with an 8-7 win on Saturday to snap a five-game losing streak, but Fresno capped the series with a 17-0 rout on Sunday.

The Bees opened a seven-game road trip Monday with a 6-4 loss to Las Vegas, giving Salt Lake a 4-12 record in June. The Bees are nine games behind first-place Las Vegas in the division standings.

El Paso is four and a half games behind Las Vegas and third-place Albuquerque is seven games off the pace.