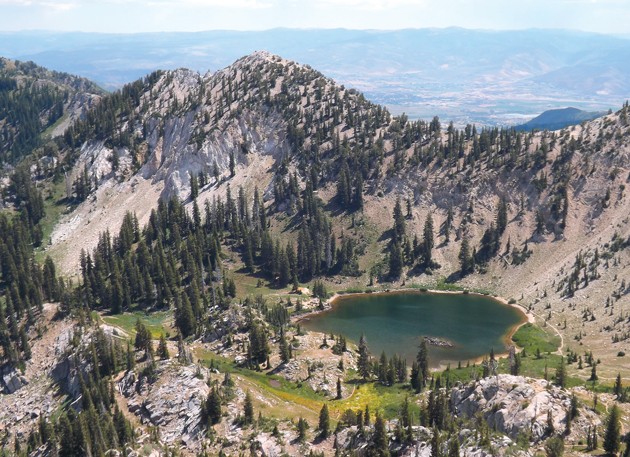 “Any man who says he’s never been scared is either lying, or he hasn’t been anywhere or done anything.”

—From “Sackett” by Louis L’Amour

There is always more than one way to the top of a mountain and one of these days I’m going to realize the easier route is probably the way to go.

But there is often so much more to see off the easier trail, in the forest or along a rocky face. I like to follow a deer trail or an open ridge to get a different perspective.

A few weeks ago, my wife and I climbed a peak above Brighton Ski Resort that Mormon settlers named Pioneer Peak in the 1800s. Ever since the first Pioneer Day celebrations that Brigham Young held at nearby Silver Lake, people have flocked to this basin during summer, first for mining and timber, and in modern times for outdoor recreation.

Pioneer Peak rises to an elevation of 10,440 feet along the top of a divide that separates Brighton from the Snake Creek drainage, which is a long canyon that empties into the Midway area of Heber Valley. The peak looms directly above Lake Catherine and has a series of chalk-white cliffs that plummet hundreds of feet down to the lake.

The north face of the peak is covered with mixed sub-alpine fir, limber pine and Engelmann spruce that are twisted and matted. The area around the peak is easily accessed via the Lake Mary/Catherine Pass trail that begins at the Brighton Ski Resort signboard at the top of Big Cottonwood Canyon.

The distance to the peak is not far, but if you approach the peak from the north and leave the trail you will be in for an epic struggle. We started our hike at the signboard and enjoyed the well-worn path that meanders beneath the ski lifts for about a mile up the slope to Lake Mary.

Just before you arrive at the old concrete dam that holds Lake Mary back, there is a trail junction where a stream crosses the trail and then plummets over some granite cliffs into a rock pile. This little waterfall is bound on both sides by evergreens and makes a perfect place to have a snack and observe the surrounding terrain.

A few steps away from this waterfall the trail splits. To the left on a trail marked “Clayton Peak” you can reach tiny Dog Lake in about 500 feet. This pretty little lake is set in a bowl below the Snake Creek ridge and it is a favorite hangout for moose, so be on the lookout if you go there.

If you continue straight on the trail you will soon arrive at Lake Mary and when we did the other day, we were greeted with a stunning view of a blue mountain lake surrounded by granite slabs, boulders and high peaks.

After Lake Mary, the trail climbs a bit higher through trees to a shelf where you will notice beautiful Lake Martha set at the bottom of a scree field below majestic 10,645-foot-high Tuscarora Peak. Lake Martha is one of my favorites because it has a tiny pine tree island that looks like a pirate ship.

Beyond Lake Martha the trail enters woods again and climbs steeply to an open overlook about 500 feet above Dog Lake, which is visible below. On the horizon is 10,721-foot-high Clayton Peak, which is immediately recognizable due to Brighton’s Great Western ski lift house located on its northwest slope. The trail up to this overlook was easy, enjoyable and “fun for the whole family” as the saying goes. But this point is where we left the trail. If you wanted a simple hike, you could stay on the main trail and arrive at beautiful Lake Catherine, which is the destination of most people who hike on the Lake Mary trail. I, however, conned my wife into heading straight up the spine of the mountain, through the rocks and gnarled trees, to the summit of Pioneer Peak.

The going was easy at first as we followed a faint deer trail. The ridge, however, became narrow, steep and exposed on the east side, which made travel difficult, thrilling and scary at the same time. After some bushwhacking, scrambling, and a few colorful words to describe the chosen route, we reached the summit ridge shaking and sweating. Looking back, I would discourage anyone but the most skilled climbers from attempting this route. That being said, the views along the steep ridge were incredible. Dog Lake was visible far below in its bowl along the entire route and it looked like a precious jewel set in a field of green.

We also discovered several old mines way up on the peak’s face where the minerals running through the rock face were a gorgeous aquamarine color indicating the presence of raw copper. Large limber pine cones were strewn about and at one point we spooked a young four-point buck, a doe and a few younger mule deer. I about had a cardiac event when I nearly stepped on a sage hen.

The summit is an interesting place. The chalky rock that makes up much of the peak is grotesquely eroded in places. The view of the surrounding terrain, most notably Lake Catherine directly below to the west and 10,648-foot-high Sunset Peak to the southwest, is stunning.

To the south, the seldom-seen or -visited back slope of these peaks drops in a series of rugged slopes and cliff shelves down into Snake Creek Canyon. The weather changed on us, but there was no way we were going back down the route we came up. We instead followed the Snake Creek ridge east over 10,315-foot-high Preston Peak to the “Crest Express” lift house at Brighton. The ridge run was simple and the views were spectacular. From the lift house it was an easy walk down the service roads back to the parking lot.

Anyone who would like to visit Pioneer Peak could do so simply and safely by following the Lake Mary Trail to the Dog Lake Junction. At that point, turn left on the trail marked “Clayton Peak.” Follow the trail past Dog Lake and when it crosses the first lift access road, turn right and follow that road up to the “Crest Express” lift house.

From that point, head right and west up the ridge and tie into the faint footpath that will guide you along the crest where you will eventually arrive at the summit of Pioneer Peak. The last little stretch is a bit challenging, as it is sandy, rocky and steep, but the worn path is obvious in most places and can be followed safely.

Before the winter snows sock them in, take advantage of these high places and the beauty they have to offer. If you go, take plenty of water, a good map, food, rain jacket, sweatshirt and a camera so you can capture the amazing scenes unfolding before you. Be safe and limit your adventure to the extent of your comfort and capabilities. Always tell someone where you are going and when you plan to return. Check the weather and make good decisions and if possible, hike with a partner.

For more information, contact the public lands information center at 801-466-6411.