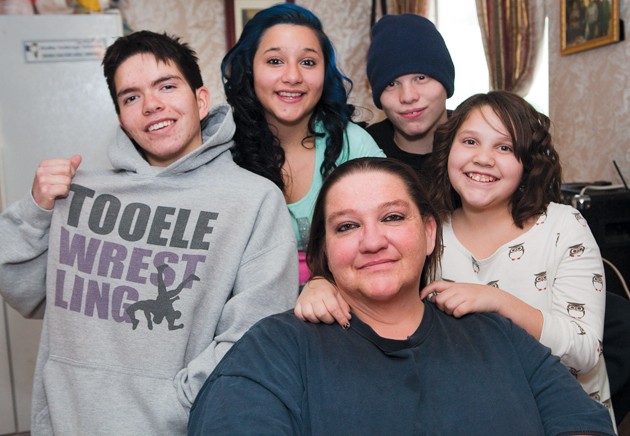 Wendy Escamilla is surrounded by her children Jose, Maria, Angel and Rosa in their Tooele Home.

The Escamilla family of Tooele will probably remember 2014 as the Year of Hospital Trips.

Both of the family’s daughters have been in and out of emergency rooms and doctors offices as they were each diagnosed with a serious illness, straining morale and finances alike.

But, they say, the year’s trials have only brought them together.

“It’s brought us a lot closer as a family,” said Wendy Escamilla.

The Escamilla family has been selected as the Tooele Transcript Bulletin’s 2014 Benefit Fund Family. With a little help from Transcript Bulletin readers, parents Jose and Wendy are hoping for some help to make the season bright for their children Jose, Angel, Maria, 13, and Rosa, 10, despite the challenges they’ve faced this year.

The year began with Maria, then 12, experiencing a series of mysterious medical symptoms. Her unknown malady was severe enough to prompt Wendy to quit her full-time job, taking the family down to one income from dad Jose. After several trips to the emergency room and a string of tests, Maria was diagnosed with endometriosis.

Just as Maria began to improve, though, Rosa started to have trouble of her own.

“It seemed like we just found out what was wrong with Maria when Rosa got sick,” Wendy said. “I just couldn’t catch my breath.”

Tests revealed Rosa had diabetes, a diagnosis that meant more hardship and adjustment on the family.

Wendy said watching the two girls be poked and prodded for months on end was one of the most difficult moments for her as a mother.

“Watching them be poked and tested was so hard,” she said. “Being a mother and wanting to take that pain away from them, but not being able to, was the worst.”

On top of the recent medical problems, Maria has also been battling stress from a traumatic childhood experience, and Jose and Angel both have learning disabilities. The family’s budget has been stretched to the max as they try to compensate for both losing an income and paying a host of medical bills.

“We’re basically focused on putting food on the table and keeping a roof over our heads, such as it is,” Wendy said, looking around the family’s modest Tooele home. “I’m just worried about the kids. I just don’t want them to go without Christmas because they’re good kids. They don’t ask for much.”

When asked what they wanted for Christmas, the four children unanimously wished for something to ease the load on their parents.