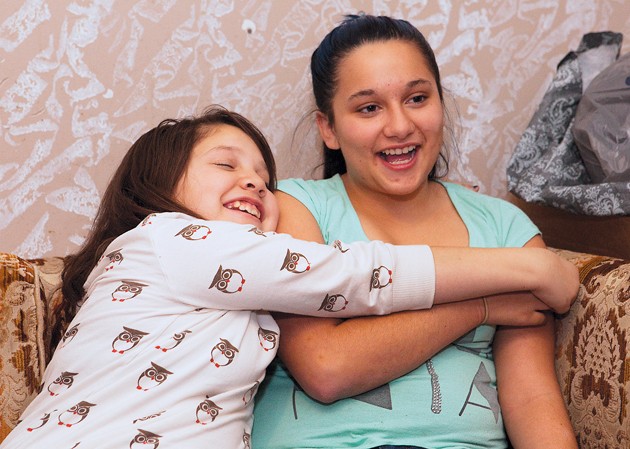 Rosa Garcia hugs her sister Maria as the elder sister talks about how close the pair has gotten during the past year. Both have been hospitalized during the year and battled sickness.

Maria and Rosa Escamilla look like a couple of typical sisters.

This time last year, though, the two weren’t as close. But over the course of 2014, both have experienced serious medical problems that have galvanized their relationship.

Maria and Rosa — along with mom Wendy, dad Jose, and brothers Jose, 16, and Angel, 15 — have been chosen as the Tooele Transcript Bulletin’s 2014 Benefit Fund Family.

The Tooele family’s year has been filled with challenges, but with a little help from Transcript Bulletin readers, their Christmas can be a little brighter.

In January, Maria, then 12, was a happy and healthy kid, remembers mom Wendy, but her health took a sudden and worrisome turn in February.

“She went from a healthy child — you know, just the occasional cold — to one day having a stomachache and being in really bad pain,” Wendy said. “It went from that to a nightmare.”

The next five months were filled with ambulance trips, hospital stays, including a two-day stay at Primary Children’s Hospital and sometimes daily trips to the doctor. Maria underwent a whole battery of tests, from CAT scans to ultrasounds to MRIs, and was sometimes in such severe pain that even morphine couldn’t dull the sensation.

Wendy quit her job to have more time to care for Maria, taking the family down to a single income from dad Jose.

Maria remembers being withdrawn during this time, often curled on her bed in severe pain, trying to keep everyone, including family and a close friend, at arm’s length.

“I didn’t want to talk to anybody,” she said. “If someone tried to talk to me, I’d go hide in the shed.”

After five months of tests and speculation and guesses, Maria was diagnosed with endometriosis. A series of medications followed, and she slowly has gotten back to speed.

Today, she seems like a normal, bubbly teenage girl, talking and laughing with friends, glued to her phone; she recently dyed part of her hair blue. But although the worst is hopefully behind her, she said, she hates telling the story of her year.

“I don’t like talking about it from the beginning,” she said. “Ever since I got sick it’s been crappy and I felt like it was my fault for being sick.”

When Rosa was born, she had unusual blood sugar levels, Wendy said, and doctors told the family she had a 50-50 chance of developing diabetes in her childhood.

“We’ve had her tested every year,” Wendy said. “We’ve been watching for signs her whole life.”

Around the same time Maria started feeling better, Rosa developed frequent urinary tract infections and complained about being thirsty all the time — signs the family had been watching for, and hoping they’d never see. Rosa was diagnosed with diabetes just after Halloween, and has been adjusting to her new way of life ever since.

Snacking on a banana, Rosa said it’s also been hard explaining to her friends why she can no longer have some of the same foods she used to like. But she has been feeling better recently.

Wendy said between the two girls’ illnesses, the year has been trying emotionally, as well as financially.

“Being able to talk to my mom has helped,” she said. “I’ve done a lot of crying, and a lot of praying.”

If Rosa could have anything for Christmas, it would be a remote-control helicopter with a camera on it — but she admits even that gadget takes second place to what she’s wanted since before her diagnosis: an Easy-Bake Oven. On top of Maria’s wish list is a teacup Chihuahua — to which Wendy shakes her head — or a wand curling iron.