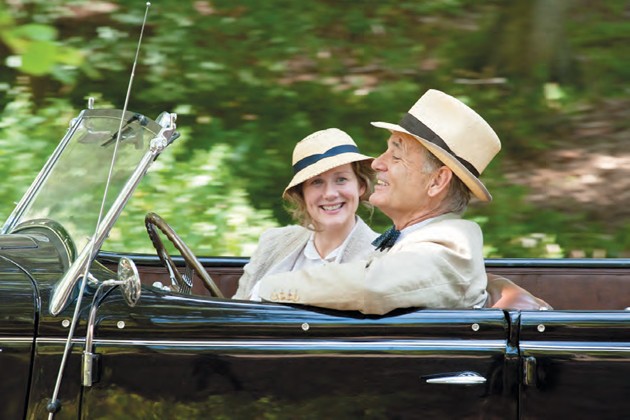 Bill Murray, as Franklin Delano Roosevelt, and Laura Linney, as his mistress Daisy, star in “Hyde Park on Hudson,” one of the films being released this winter. image courtesy Daybreak Pictures

Winter is cinematically fickle. Its mixed bag of brilliance and banality seems to mirror the bright festivity of the holidays with the long, cold, bleak months that follow. Here are a few of the best-looking films of this year’s winter releases:

Bill Murray stars as Franklin Delano Roosevelt in the based-on-true-events tale of a visit by the King and Queen of England to America in 1939 — the first time a British royal couple had visited together. Also starring Laura Linney as FDR’s mistress, Samuel West as King George VI, Olivia Colman as Queen Elizabeth and Olivia Williams as Eleanor, “Hyde Park” could be a stellar look into a little-known pocket of history.

For fans of Alfred Hitchcock’s prolific and classic body of work, Anthony Hopkins dons a fat suit and plenty of makeup to become the Master of Suspense. Centered around the making of “Psycho” in 1959, the movie follows Hitchcock and his wife, Alma Reville (Helen Mirren), who played a significant but little-known role behind the scenes of most of Hitchcock’s works, as they struggle to adapt, finance and film an adaptation of serial-killer Ed Gein’s crimes. Scarlett Johansson becomes Janet Leigh for the film’s production, with Jessica Biel as Vera Miles and James D’Arcy as Anthony Perkins.

Peter Jackson’s fourth foray into the world of Middle Earth looks every bit as gorgeous and thrilling as his award-winning “Lord of the Rings” trilogy. “The Hobbit” is a prequel to the previously released tales of hobbits, elves, dwarves and men, chronicling the adventures of Bilbo Baggins (Martin Freeman) as he unwillingly becomes part of a band of 13 dwarves set on reclaiming their mountain home from the clutches of the dragon Smaug. Ian McKellen reprises his role of Gandalf, and Andy Serkis is back as Gollum. Jackson’s split the single book into three movies, which have been filmed in 48 frames per second — verses the standard 24 frames per second — creating a super high-definition effect. He’s built up enough faith among fans and critics with “LOTR” to take a few risks. If this movie isn’t amazing, I will cry.

A star-studded cast and reports of live-recorded singing have built up most of the buzz for this latest adaptation of Victor Hugo’s book and the Tony Award-winning musical based upon it. Hugh Jackman, who already has a Tony award proving he can sing, stars as Jean Valjean, and he is flanked by Russell Crowe as Inspector Javert, Anne Hathaway as Fantine and Amanda Seyfried as a grown Cosette, with Sacha Baron Cohen and Helena Bonham Carter as the Thénardiers. The songs were reportedly sung live while filming, as opposed to being recorded in a studio and dubbed later, and the scenes from the preview look as if director Tom Hooper has tried to retain some of the look and feel of an on-stage experience while utilizing the possibilities of cinema.

Jamie Foxx stars as Django, a slave bought by a dentist (Christoph Waltz) with the intent of making him his deputy bounty hunter. Instead, Django sets out to rescue his wife from and wreak revenge against his brutal slave owners. Leonardo DiCaprio, Samuel L. Jackson and Kerry Washington also star in the film written and directed by Quentin Tarantino. It’s being billed as a drama/western, and while it might not be the typical cowboys-and-Indians fodder, with this many big names it could signal a slow return to the genre. It’s not yet been rated, but Quentin Tarantino, bounty hunters and brutal slave owners? It’s going to be rated R.

Kathryn Bigelow and Mark Boal reunite to film another lifelike, military-centered drama. Instead of seeking to shed light on the deployed experience, as in 2008’s “The Hurt Locker,” “Zero Dark Thirty” follows SEAL Team Six, the special-ops team who tracked down — and killed — Osama bin Laden in 2011. Joel Edgerton and Jessica Chastain star, and the subject material was recent enough and big enough news that there’s likely to be a lot of public interest. Although it opens in January — generally a month for the chaff movie studios have to rid themselves of somehow — it would be very surprising if this one tanked. It would also be surprising if it did not end up being rated R.

Chris Colfer, of TV’s “Glee” fame, wrote and stars in this coming-of-age movie. Colfer is Carson Phillips, an ambitious student whose carefully laid plans go awry when he is struck and killed by lightning. The bulk of the movie is his reflection on how he blackmailed his fellow students into contributing to his literary magazine and how much of life he missed out on by being too focused on planning it. Christina Hendricks, of TV’s “Mad Men,” and Angela Kinsey, from TV’s “The Office,” are also featured. Its look is a bit like a more polished “Juno,” and it could be next year’s indie darling. I’m guessing it will be rated PG-13.

Like “Red” or both of “The Expendebles,” “Stand Up Guys” follows older, retired tough guys who reunite for one last job. In this case, Al Pacino, Christopher Walken and Alan Arkin are gangsters who come together again for one last hurrah after Pacino is released from prison. Walken takes him out for a night on the town, and the two rescue Arkin from a rest home to complete the trio, but the evening’s events are a prelude for Walken’s last contract — to kill Pacino. The success of previous films playing to aging Baby Boomers bodes well for “Stand Up Guys,” but the acting and writing appear to be good enough — at least from the trailers — for it to stand on its own.

“Beautiful Creatures” is billed as a “supernatural love story” about a small-town boy, Ethan (Alden Ehrenreich), who falls for the mysterious Lena, (Alice Englert), who seems to have magical powers. As their relationship progresses, they find secrets about their families and their small Southern town. Emma Thompson, Emmy Rossum, Jeremy Irons and Viola Davis also star. I’m not sure how well this magical Romeo and Juliet-looking concept will work, but the previews look rich, lush and mysterious enough to be intriguing. If I had to, I’d guess this gets rated PG-13.