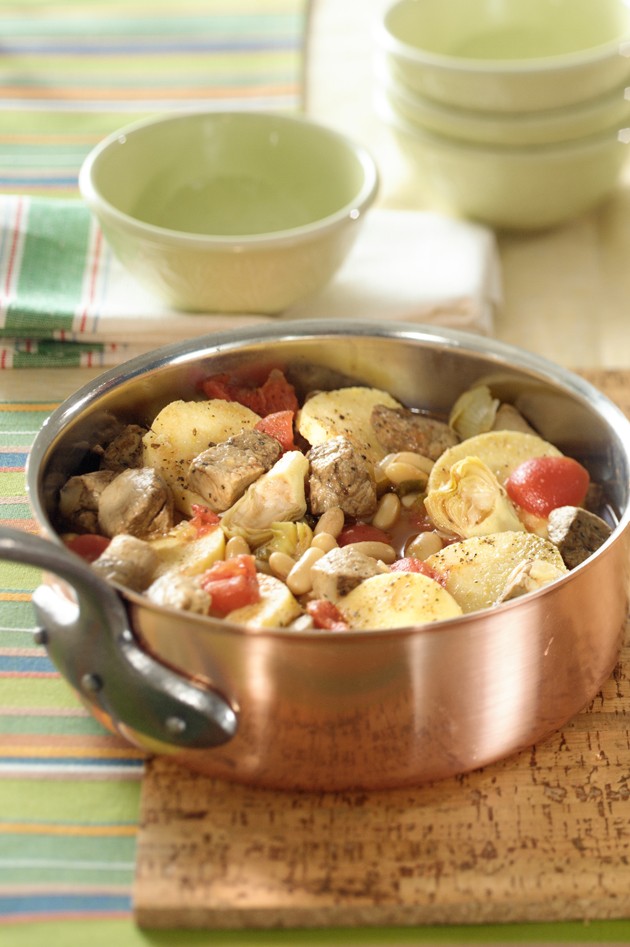 A can of this and a jar of that is not our idea of cooking. But sometimes we come across a recipe that combines cans and packages with start-from-scratch ingredients in such a way that it takes the recipe out of the realm of “short-cut convenience” and into bona fide cooking. Braised Pork with Cannellini Beans is that kind of a dish. Granted, it’s made with a handful of so-called ready-to-use ingredients: peppercorn pork tenderloin, marinated artichoke hearts and basil-garlic polenta. But instead of putting everything in a pot and hoping for the best, the cooking is a two-step process called “braising.” The first step is sautéing, to sear the meat and vegetables, and the next is simmering, to keep the main ingredients juicy and make a tasty sauce.

Braising, one of the oldest ways of cooking, originated as a method of preparing food on an open hearth. The food was cooked in a tightly covered pan, a braisiere, which was put directly on the hot embers and covered with coals. Ordinarily, braising is a long, slow process, but we know “long and slow” are out of the question for many home cooks.

Our recipe starts as a braise by browning the onion and pork in a large skillet. Next, in the interest of saving time, we switch gears and instead of a long, slow simmer, we have cut the cooking time to minutes. When someone else has seasoned the pork, marinated the artichoke hearts, and added basil and garlic to the polenta, it’s like having a crew of helpers in the kitchen.

Look for tubes of cooked and seasoned polenta in the produce section of the supermarket. This dish can be assembled ahead of time, making it great for a party.

1. Heat oil in a large skillet over medium-high heat. Add onion. Cook 2 minutes. Scrape onion to the side. Add pork. Cook 4 minutes, turning once, or until browned on all sides. Add beans, tomatoes and artichokes. Scrape up browned bits on the bottom of the skillet.
2. Lay polenta slices over mixture. Cover and cook 5 minutes, or until polenta is heated through. Serves 6.

Look for Relish magazine, celebrating America’s love of food, each month in Tooele Transcript-Bulletin. For more Relish recipes and to sign up for our newsletters, log on to relish.com. To download our new Relish digital editions and Relish Daily Dish phone app, go to relish.com/mobile