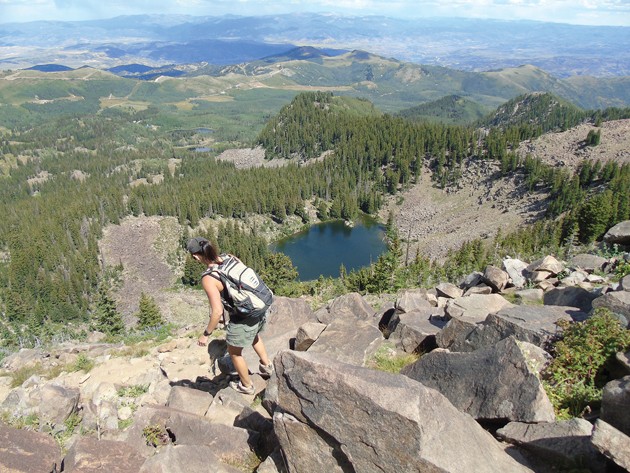 View to the northeast while decending Clayton Peak.

“I took the one less traveled by and that has made all the difference.”

As summer winds down it’s a perfect time to hike in the majestic Wasatch Mountains.

I have hiked all over the range, which is not far from Tooele County, but there are still thousands of places that await discovery. In my lifetime, it would be impossible to hike all of the trails I would like to explore in the Wasatch, but last weekend, I did check out an area that I haven’t been to before: just south of Guardsman Pass.

The pass is located at the top of Big Cottonwood Canyon. Access is via eastbound state Route 190 – Big Cottonwood Canyon Road. Just before Silver Lake/Brighton Ski Area, watch for signs for Guardsman Pass/Park City. Make the hard left turn onto South Guardsman Pass Road and proceed up the steep, paved road, which winds to the top of Guardsman. At the top the elevation is 9,698 feet above sea level, and there is a small area to park with a few portable toilets that seem to have gone a few seasons without being emptied.

This is a popular area on summer and fall weekends, and the parking lot is usually full with overflow parking going down both sides of the pass.

Ignore the crowds and lack of parking, and walk over to the edge of the pass and look east toward the Uinta Mountains. The view is incredible. The main attractions at Guardsman are a short, steep trail on the north side of the pass up to the top of 10,026 foot-high Round Bald Peak, and a short, rugged trail down to Bloods Lake, which is a surprisingly large mountain lake ringed by evergreens, and set in a deep bowl below peak 10,420.

Both of these trails are usually jammed with hikers. Still, each one is worth the effort to explore. I, however, like to follow the words of Robert Frost and take the trail less traveled because the best rewards in the mountains are often found at the end of trails that require work, and where few people go.

Therefore, my wife Mishelle and I decided to hike up and over peak 10,420 and then drop into a rocky bowl that contains Lackawaxen Lake, which is a beautiful alpine lake ringed by evergreens, and set below 10,721 foot-high  Clayton Peak.

The approach to peak 10,420 is straight forward. From the parking area, head south and up a steep trail. I thought we would be in for some bush whacking, but to my surprise, the trail, even though rocky, was well worn and easy to follow.

There were beautiful mountain flowers everywhere, such as showy daisy. These flowers have an orange center and are ringed by light purple petals. There were also red mountain paintbrush and numerous other red, orange and white flowers. There were Engelmann spruce, Douglas fir and Limber pine, which featured large, green pine cones in their boughs, some of which were turning brown and getting ready to fall.

With every step of gained elevation, the view got better. The sky was clear on this day and the bald, rocky peaks of the High Uintas were plainly visible on the eastern horizon. Jupiter Bowl above Park City, and the peaks east of Bonanza Flat above Deer Valley, were lush and green.

This hike doesn’t mess around. It goes straight to gaining elevation, and after a short, strenuous hike, we topped out on the north summit of peak 10,420. The views west of the jumbled peaks separating Big and Little Cottonwood Canyons are breathtaking. From this vantage point, we could look down onto Brighton and clearly see the trails around Silver Lake up to Twin Lakes Reservoir.

We looked around and then descended the south face of the peak through tall grass, and woods of aspen and fir. When we arrived at the pass between 10,420 and Clayton Peak, we had the option of dropping down into the basin to the east and hiking up to Lake Lackawaxen or heading straight south to the top of Clayton Peak. My wife and I are “Peak Baggers” at heart, so even though the day’s destination was Lake Lackawaxen, we changed our plans and followed the trail less traveled up the spine of Clayton Peak.

This stretch of trail is not for the weak kneed or short of breath. It is steep, rocky, and fades out into boulder fields for the last stretch to the summit. Yet, it is a beautiful trail that not many people follow. As we climbed, the views of rock rivers to the east, which separated the forest from Lake Lackawaxen, were something to behold. A rock river, or rock glacier, is an old moraine or boulder field that was pushed up and spread out by a glacier eons ago. The ice is long gone, but the evidence of glaciers’ powerful action is clearly visible in the formations.

The vegetation was reduced to krummholz or wind timber, which is sub alpine fir and other evergreens that cannot exist in their normal form and appear as matted, ground hugging bushes. Some of the wind timber is also known as banner trees because the windward side of the tree is bare of branches and the lee side of the tree has branches extending in the direction of the wind like a banner.

We toiled up to the summit ridge, and just before the last hard stretch of large boulders before the summit, we noticed the upper lift house of Brighton’s “Great Western” ski lift below us on the mountain to the west. We continued up the boulders to the summit, and meanwhile, I admired orange, light green and yellow lichens on the rocks. Finally, on Clayton Peak’s summit, several other peaks were in full view, including Pioneer Peak, Sunset Peak, Mount Wolverine, Devil’s Castle, Sugarloaf, American Fork Twin Peaks and dozens of other lesser known, yet high peaks. I usually see these peaks from the west looking toward the east, so it was interesting to see them from a different view.

The south face of the peak drops into Snake Creek, which empties into Heber Valley. Further south, the stunning bulk of Mount Timpanogos filled the view with its rocky peaks and cliffs still sheltering perennial snowfields. We sat down, pulled out our lunch, and shared the moment with one of the fattest chipmunks I’ve ever seen. After lunch, we grabbed our packs and descended the peak back to pass 10,111 and then dropped down into a basin covered by green meadows and wildflowers bordered by pine and aspen. In this basin we tied into the Lake Lakawaxen trail and followed it out past Bloods Lake and back to Guardsman Pass.

The hike was quite the loop via a somewhat unconventional route and we were tired at the end. For those who want to see big views, which not many hikers take the time to appreciate, this route is a good choice. But just remember: The steep climb out of the bowl containing Bloods Lake is disappointing after a long, rocky hike.

If you’re heading toward the Wasatch, go prepared with good hiking boots and plenty of water. Wear sunscreen because you’ll be on exposed ridges. Always check the weather and avoid the high country if there is a chance of lightning. The road is also paved all the way to Guardsman Pass and the area is easily accessible.