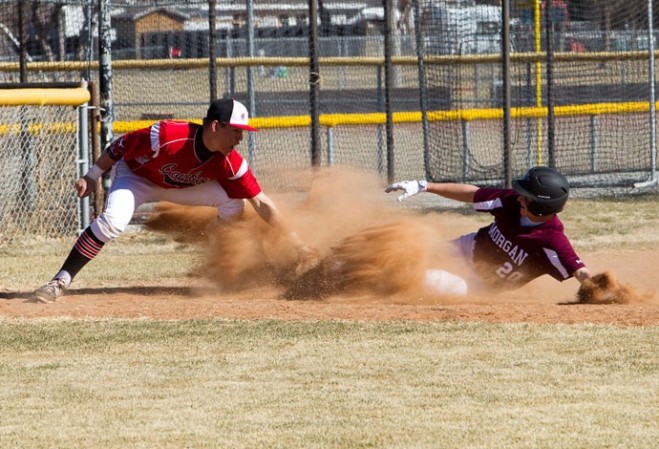 It took a few innings for Grantsville to get back on track against Morgan on Tuesday, but the Cowboys used a six-run sixth inning to beat Morgan 11-6.

“I didn’t have my team ready to play,” head coach Loren Anderson said. “To make a comeback makes it good. It’s always good to win rather than lose, obviously, but for the last three innings I felt like we played the game the way it’s supposed to be played.”

Third baseman Kyle Peterson highlighted the inning with a one-run shot over the center-field fence, just one pitch after center fielder Riley Smith cleared the bases with an RBI triple to make it 9-6.

Grantsville hit through the order and used the two-out rally to make it 11-6, and Grantsville pitcher Wyatt Barrus struck out the side in the top of the seventh inning to earn the win.

“They were just behind everything,” Barrus said of the Morgan batters. “I was just throwing it by them … just throw strikes and make them beat us, and I think when we did that they didn’t hit the ball real well.”

Barrus finished with four strikeouts in 1.2 innings pitched. Offensively, he went 2-for-3 with a walk, double and RBI.

“We expect that out of Wyatt, he’s obviously a great player,” Anderson said. “We just have a lot of confidence in him.”

Grantsville gave up five runs in the top of the second inning, three of which were unearned as Morgan (1-1) hit through the order.

The Cowboys responded well in the bottom half of the frame, stringing together three hits by sophomore Brayden Peterson, junior Riley Jensen and first baseman Christian Kelley. Kelley hit a double to left field that knocked the other two in, and later scored on a Burke Boman sacrifice fly to center. The second inning ended 5-3.

“You do one or two good things and momentum is crazy,” Anderson said.

Kyle Peterson hit a ground rule double through the right field fence in the bottom of the fifth inning to pull the Cowboys to within 6-5. The third baseman went 2-4 and struck out once.
Smith went 2-4 with an RBI and struck out twice.

Riley Jensen started the game from the mound, lasting 1.1 innings and earning one strikeout. He allowed three unearned runs. Coy Johnson came on for Jensen in the second and allowed three runs through the top of the third, though he pitched to one batter in the fourth. Kyle Peterson then came on, allowing no runs on two hits and a walk. The Grantsville pitching staff combined for seven strikeouts and five walks.

“That was kind of the plan all day anyway to throw upwards of three guys,” Anderson said.

Grantsville scored its 11 runs on 13 hits, and Morgan sophomore Connolly Breshears was credited with the loss.

The win, Grantsville’s first of the season, came after a disappointing 0-4 tournament in St.George last weekend.

The Cowboys will next face Davis and Clearfield in two games at home on Saturday.

“Through the first five games we’ve pitched it pretty well and played defense,” Anderson said. “We’ve just got to be more consistent offensively.”