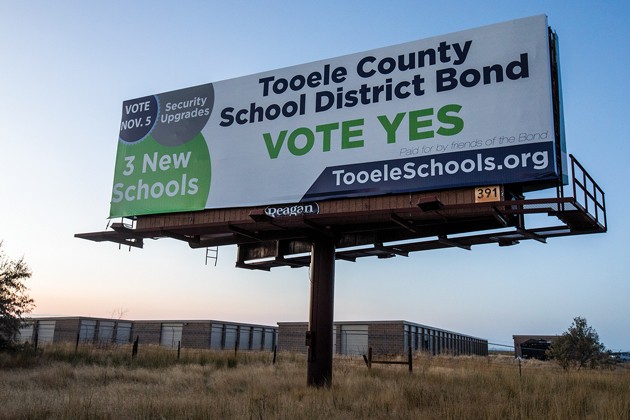 This billboard on SR-36 was paid for by the Tooele Education Foundation.

A billboard west of Adobe Rock on state Route 36 that encourages voters to vote “yes” on the Tooele County School District’s $190 million bond proposal was paid for by the Tooele Education Foundation, according to the foundation’s executive director.

It is a violation for a school district to pay for a billboard to influence voters because the state Political Activities of Public Entities Act prohibits public entities from influencing a ballot proposition.

The act does allow public entities to provide “factual information about a ballot proposition to the public, so long as the information grants equal access to both the opponents and proponents …”

The billboard notes that it was paid for by “the Friends of the Bond.”

The officers of the Friends of the Bond are listed as: Clint Spindler and Ed Dalton as the primary officers. John Johnson is listed as the treasurer or financial officer.

Board members of the Friends of the Bond are: Sheldon Birch, Alison McCoy, Frank Mohlman and Karen Nelson.

According to a financial disclosure report filed with the Lieutenant Governor’s office, the Friends of the Bond has received one donation — $3,600 from the Tooele Education Foundation.

The Friends of the Bond also reported one expense — $3,504 to Reagan Outdoor Advertising for the billboard.

The $3,600 donation came from unrestricted donations to the Tooele Education Foundation, according to Spindler.

“There were no school district funds involved,” he said.

There will be additional donations from the foundation and expenses by the Friends of the Bond as election day draws near, Spindler said.

The Tooele Education Foundation is a nonprofit organization established under Internal Revenue Service regulations as a conduit for tax-deductible donations to enhance excellence in education in the Tooele County School District, according to the foundation’s website.

The foundation is a separate legal entity from the Tooele County School District with its own governing board of directors.