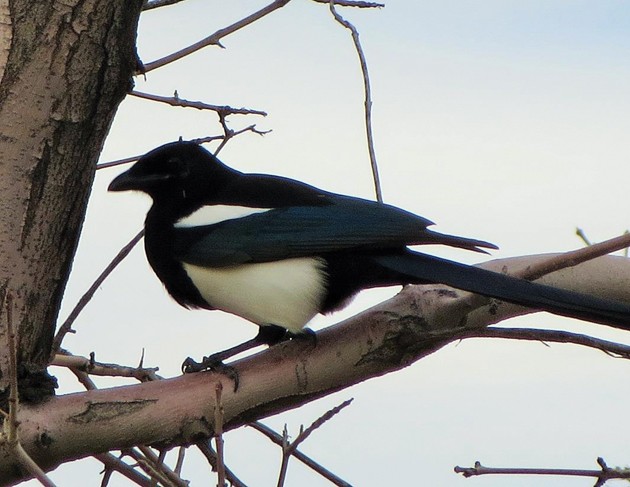 A black-billed magpie perches in a tree in the Pine Canyon area.

Possessing many different behavioral traits, the black-billed magpie is known for its particular habits, which can vary from bold, brave or even odd.

For example, the black-billed magpie is omnivorous, and though they aren’t picky, they are known for their bold attempts to obtain food — some of which can include stealing from other birds, coyotes and foxes. Other times, the black-billed magpie will band together with other magpies into flocks and they will mug prey from raptor birds. They habitually feed on ticks or pick off the open sores of large mammals, too.

While courting, males will bring food to females and stand guard nearby to reduce her chances of mating with another male. Sometimes, female black-billed magpies will accept an interested male by begging for food from him. Once they mate, both the male and the female participate in nest-building, which can take up to 40 days.

Another interesting fact that most people don’t know is that black-billed magpies are capable of tracking food by its scent. This is a rarity for birds, because most species have a poor sense of smell. When food is abundant, black-veiled magpies will cache away extra scraps of food by digging shallow holes in the ground and burying it for short periods of time.

Scientists are unsure why magpies perform this behavior, but when a black-billed magpie discovers another magpie that has died, it calls out to attract other magpies and they form a gathering. This behavior is often referred to as “the funeral.” When black-billed magpies gather around the dead one, which can last up to 10 or 15 minutes, the number of guests can range up to 40 birds.