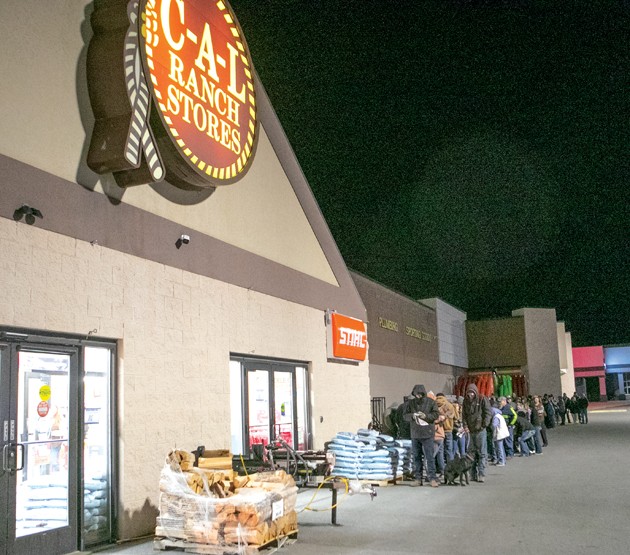 Vehicles were idling with shoppers keeping warm in parking lots at Home Depot and Walmart in Tooele City before 6 a.m. on Black Friday while bargain hunters at C-A-L Ranch formed a line outside and waited for the doors to open.

In years past the Tooele City Walmart parking lot would have no empty spaces before sun up on Black Friday. Inside the aisles would be packed full of shoppers — so full that pushing a cart through an aisle was a near impossibility. Pallets of advertised items sat shrink wrapped and guarded until the hour for Black Friday arrived.

In 2022, there was still room in the parking lot after Walmart opened. Inside the store appeared to be about as busy as a Saturday afternoon. All the check stands were open with clerks standing by waiting for customers. There were plenty of employees, some dressed as elves, stationed throughout the store to help customers.

The National Retail Federation expects Black Friday to be the biggest single day for holiday shopping in 2022 with 69% of holiday shoppers reporting on a survey that they expected to shop on Black Friday.

However, retailers have continued to offer early “Black Friday” deals which has changed the nature of the long lines and crowded stores for one-day only bargains, according to National Retail Federation President and CEO Matthew Shay.

“Nonetheless, consumers are starting earlier than ever to be sure they can get what they want, when they want it, at a price they want to pay. Black Friday stopped being a one-day event years ago, and this year some consumers started shopping for Christmas as early as Halloween,” Shay said in 2021.

While national data from brick and mortar stores for the holiday shopping weekend are not yet available, the National Retail Federation expected 166.3 million consumers to shop during the weekend — up 8 million shoppers from 2021.

The most popular items sold in  ecommerce on Black Friday were Xbox Series X, Bluey items, the game Call of Duty:Modern Warfare , drones, and MacBooks. Hot items on Cyber Monday were Legos, PlayStation 5, Hot Wheels, the game Madden 23, and smart watches, according to Adobe Analytics.