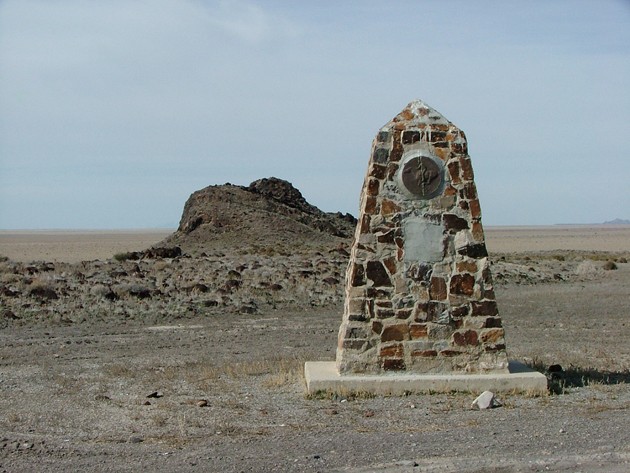 Landscape is bleak at Black Rock Pony Express Station. There are no trees, grass or even sagebrush.

“It’s a thankless life we lead — ‘Cause nobody knows our names — We are silhouettes on the hills — And shadows on the plains.”

A few miles beyond where you pass the sign for the Dugway Geode Beds and just before you round uninviting mountains on the south side of the road known as the Black Rock Hills, you will come to a forlorn obelisk standing in front of a dead looking rock outcrop.

This is Black Rock and you are now at the Pony Express Trail’s Black Rock Station. This location gives Dugway Station stiff competition for the title “bleakest outpost on the trail.” There are no trees, no grass, not even any sage brush — just blank dirt and rocks. Granite Mountain to the north, viewed from this point, seems to float on hot summer days due to mirage on the desert.

If you look at the pyramid-shaped peak to the northeast at the north end of the Dugway Range, you can see some of Lake Bonneville’s best wave-gouged terraces or “bath tub” rings anywhere. For eons, large waves driven across the vast expanse between Nevada’s Toano Range and the Dugway Range, slammed into the mountains here and drew these bold lines. To the west of Black Rock, you can see a sliver of green that is Fish Springs, which is below the desolate Fish Springs Range. To the south, the miserable Black Rock hills rise in a jumble and blankly stare down onto the station site.

Rhoades’s quote at the beginning of this article is a remarkable sentiment because even though the desert is quiet and empty, I imagine echoes of history driven by the wind and crashing into the land features just like ancient Lake Bonneville’s waves. If only there were a portal to another dimension that would make observation of those events possible.

One fact that escapes many people who travel the Pony Express Trail, or contemplate the riders who braved the trail’s elements and dangers, is that many times the riders were not alone on the trail. Thousands of emigrants, Army patrols, stagecoaches, and other travelers were transiting the Oregon and California trails west and east during this time.

One rider named J.G. Kelly stated that he made a narrow escape as he was charging down the trail when a group of green emigrants fired on him. When Kelly angrily confronted them they apologized and stated they thought he was an Indian. If you think about it, a fast approaching unidentified rider would cause serious alarm if you were a wagon train out in the lonely wilderness.

During the freighting season, especially when Camp Floyd was occupied, there could sometimes be mile after mile of covered wagons, sometimes three to four abreast, forming an endless parade. When the pony riders came upon these caravans, they had to turn out of the trail and ride over rough ground in order to pass the lumbering trains.

Some riders stated that they failed their oath against cursing because they “blessed” these trains in the true western style as they toiled to get around the wagons that slowed them down. In several instances, the Pony Express Trail rider was unable to carry the mail through to the next station so either the rider or the stationmaster asked the regularly running stagecoach to carry it to the next station where it would be given to the next available rider.

The riders were under tremendous pressure, both self and company imposed, to make the best possible time. George Washington Perkins was another Mormon pioneer, who signed up to ride for the Pony Express. He stated that his instructions were to “treat your horse as well as you can, but bring the mail through, even if it costs a horse.”

On one 57-mile run, Perkins made great time but he killed the poor horse. Perkins stated that the animal’s muscles seemingly turned to stone and the horse died in his tracks. Another pioneer rider, Joseph Barney Wintle, was chased by Indians for 24 miles and when he arrived at Egan station his poor horse dropped dead. Not much is stated about the cost in animals of this enterprise, but unfortunately, many animals were lost in an effort to get the mail through.

These desert portions must have been brutal on the riders as well. I have ridden horses a bit and have had a good, comfortable saddle every time. Even so, after a stretch of trotting or loping, the hind quarters get sore. One of Utah’s greatest Pony Express riders was Nicholas Wilson. Wilson wrote an amazing book entitled “White Indian Boy.” In this book, he tells of pioneer life in Grantsville, exploring the desert with his Indian friends, living with the Shoshone for several years and his service working for Maj. Howard Egan and the Pony Express.

In his book, Wilson also describes the typical Pony Express rider saddle: “Our saddles which were furnished by the company, had nothing to them but the bare tree, stirrups and a cinch. Two large pieces of sole leather about 16 inches wide by 24 inches long were laced together with a strong leather string and thrown over the saddle. Fastened to these were four pockets — two in the front and two behind on either side of the saddle.”

Imagine charging through the desert on a wild brute of a mount down a rugged excuse for a trail in Indian Country for miles and miles with a poor excuse for a saddle. That would wear a person out!

Wilson goes on to state that there were four pockets on the saddle and each one was locked with a small padlock. The home station keeper had a key to the way bill pocket. When the express rider arrived at the station, the keeper would unlock the way pocket and note on the card the time the mail arrived at the station and the time it left. He would then tell the rider how much time he would have to make up on his next leg. Home stations were spaced 40-60 miles apart and a rider typically rode from home station to home station, but often times much farther depending on the circumstance.

Not much is known about Black Rock Station, but Mormon pioneer George Washington Boyd had a contract for a time in the 1860s to keep it supplied with water in barrels and cord wood.

In his book “Roughing It,” Mark Twain described the view around the area as follows: “There is not a living creature visible in any direction whither one searches the bland level that stretches its monotonous miles on every hand.”

Not much one can add to that, mainly because there is nothing to add. Black Rock is the most mysterious of all Utah West Desert station sites. It is also a seemingly dead place — nothing remains. Even the history is lost and dead.

While some of the red and black volcanic and conglomerate rocks that comprise the outcrop are interesting and worthy of adding to a desert rock hounder’s collection, the reality is the place leaves nearly everything to the imagination. One thing is for sure: Black Rock Station makes a person appreciate water, vegetation, and not being a station man assigned to Black Rock in the 1860s.