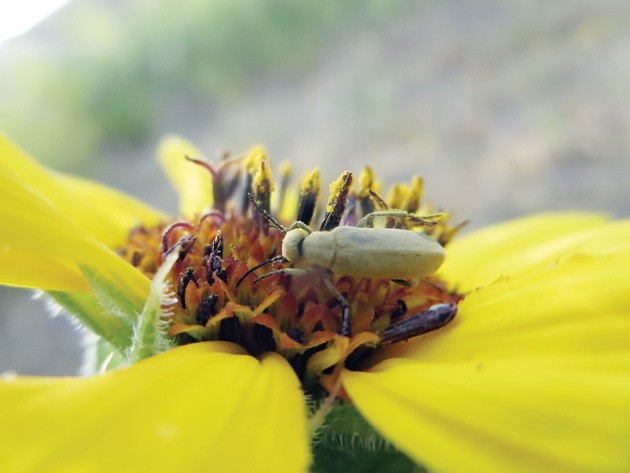 A blister beetle rests on a sunflower here in beautiful Tooele County.

July 14, 2016
Blister beetles can be deadly to livestock

The blister beetle was given its name for the hazardous chemical possessed in its body, which is intended to help it defend itself against predators.

The chemical, called cantharidin, is known for its capability of blistering skin; therefore, when necessary, the blister beetle reflexively secretes it from its joints and onto the flesh of its harasser. Because of how small and unintimidating most blister beetles are, they’re often underestimated when found feeding on the leaves of various vegetables or on the tops of flowers among gardens.

Alone, they are a nuisance for feeding on several types of flowering plants and inducing an irritable wound if provoked, mishandled, or crushed. They are, however, more drastically hazardous when it comes to large or abundant swarms, which can occur when they are being drawn to flowering plants. Because of this, blister beetles are prone to infest fields of alfalfa, which can be lethal to livestock if harvested and fed to them.

Tainted alfalfa hay fed to livestock can cause severe illness, then death. Animals poisoned from blister beetles can die within 72 hours. Signs of poisoning can include blisters on the tongue, bloody urine, diarrhea or colic. If cantharidin poisoning is suspected, a veterinarian should be sought straight away. Though horses are more susceptible to the poison than other livestock, other affected animals prone to illness or death can include cows, goats, and sheep.

Years ago, apothecaries used to mash blister beetles into a powder for medicinal uses and they called it Spanish fly. Spanish fly was used as an aphrodisiac and other various treatments. Today, it is used to remove warts.