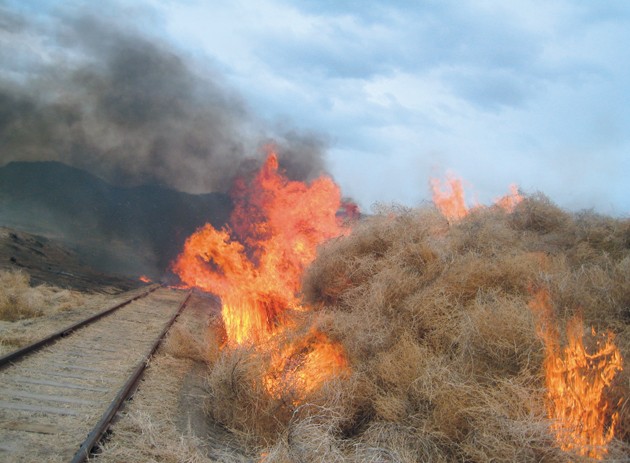 Fire burns a pile of tumbleweeds next to railroad tracks near I-80 between Delle and Clive. The BLM began the prescribed burn Wednesday to keep the tumbleweeds from being a fire hazard. photo courtesy of Teresa Rigby

A prescribed burn in western Tooele County has been started by the Bureau of Land Management and will extend into next week.

The burn, which began Wednesday by BLM West Desert District fire personnel, is being conducted within the Union Pacific Railroad easement on BLM-administered lands near I-80 between Delle and Clive.

Burning will occur in different sections along the railroad, totaling between 15 to 30 acres, said Teresa Rigby, BLM fire information officer.

“It equals out to about 15 miles worth of tracks,” she said. “In total that’s only 15 to 30 acres, so it’s not very much that we’re burning. It’ll take us two to four full days, but we have to make sure we’re within the clearing index rules each day before we burn.”

The clearing index is an air quality and smoke dispersal index used to regulate open burning and as input for other air quality decisions throughout Utah, according to the Department of Environmental Quality.

Rigby said Union Pacific Railroad and the BLM have collaborated on the project for a variety of safety reasons. The primary objective of the burn is to reduce the potential fire hazard created by tumbleweeds that have accumulated on both sides of the railroad tracks.

“The tumbleweeds can also get on the tracks and impede travel of trains, which can be dangerous,” she said. “There are really multiple reasons to do the burn. Railroad tracks can also be a good fire break, but if they are full of tumbleweeds, then the fire will keep going instead of being stopped.”

Smoke and flames may be visible from I-80, but travel should not be affected, Rigby said.

“There’s no anticipation that the burn will impact the freeway itself,” she said. “People will see it, but we don’t want them to report it. We’ve also put signs up along I-80 and at the rest stop and Delle gas station to alert people.”

The burn is being conducted while adjacent vegetation is in a green-up stage and unlikely to carry fire outside the designated burn area. Rigby said April is the perfect time of year to do a prescribed burn, because the ground and vegetation are not dried out yet.

For more information about the prescribed burn, visit www.utahfireinfo.gov.