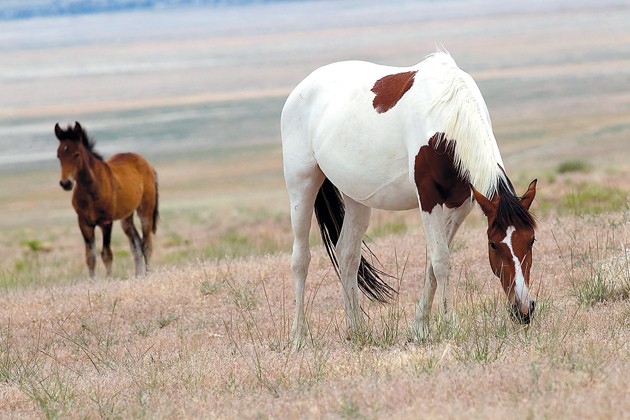 A wild colt grazes near the Onaqui range in 2013. The BLM has approved a plan to treat mares in the herd with fertility control drugs.

May 5, 2015
BLM to move forward with fertility control for wild horse herd

The Bureau of Land Management plans to move forward with a proposal to inject wild horses in Tooele County’s Onaqui herd with birth control drugs to slow the animal’s population growth.

The announcement came Friday after the BLM had completed a public comment period on the proposal.

The drug will be administered to roughly 50 mares in 2015, with additional treatments to be administered each year through 2020. The BLM will then re-evaluate the program to determine whether the fertility treatment plan is effective.

The current population of the Onaqui herd is 317, according to the BLM. The agency has set a goal to maintain a population of 121-210 horses on the Onaqui range, which is located 20 miles southwest of Tooele City.

Prior to the PZP proposal, the BLM managed the herd’s population by conducting helicopter roundups to remove excess horses. They were then relocated to holding facilities, where they remain until sold to private owners.

According to an initial 35-page environmental assessment released by the BLM prior to this spring’s public comment period, the last round-up operation cost more than $83,000 and culled 34 horses from the herd.

The BLM has treated mares released after the last three round-ups with fertility control drugs, according to the environmental assessment, and has seen success in reducing the number of foals born after those operations.

The BLM received more than 7,000 comments on that initial environmental assessment, most of which supported the fertility plan. The Humane Society wrote in to support the project, which it praised as being a humane and fiscally responsible way to manage the Onaqui herd.

Several organizations, including The Cloud Foundation and Citizens Against Equine Slaughter, also wrote to support the proposal, but raised concerns that PZP could permanently sterilize the horses if mares were treated too young. Their comments led the BLM to revise its proposal to allow for mares to reach 18 months of age before receiving an initial dose of PZP.

Several individuals and organizations also wrote to oppose the plan, including Protect Mustangs, a group that argued the proposed fertility control would disrupt natural herd dynamics.

Marybeth Devlin wrote that she felt the plan treated wild horses as though they were pests and complained that livestock received a disproportionate amount of grazing rights, compared to what is allocated for the wild horses.

She also said the BLM was selective in who it notified of the public comment period, and argued that the environmental assessment and subsequent finding of no significant impact should be rendered null and void on account of the oversight.