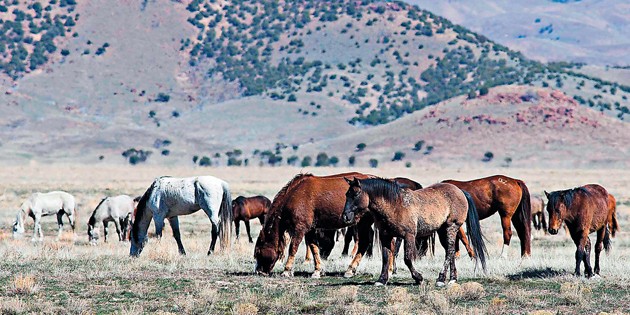 The Bureau of Land Management will conduct a “gather” of excess wild horses in the Cedar Mountains in February. Captured horses will be put up for adoption. Pictured above is the Onaqui Wild Horse Herd near Simpson Springs this summer. (photo courtesy of Fitzgerald Petersen)

The Cedar Mountain Wild Horse herd will be “gathered” in early 2017 to reduce the herd’s population and improve forage on the range, a land-use official says.

V. Gus Warr, wild horse and burro specialist team lead with the Utah State Office of the Bureau of Land Management, said on Dec. 13 the Cedar Mountain Wild Horse herd’s population now stands at 800-900 and will be reduced by 200-300 head. In addition, about 150-200 mares will be treated with a fertility control drug to help thwart pregnancy.

Horses gathered from the herd will be available for adoption, and those that aren’t adopted will be maintained by the BLM – for life.

“…We don’t send horses to slaughter,” Warr stressed. “If they don’t get adopted, we have them in what we call off-range corrals or off-range pastures. … Across the country, we currently have a little over 13,000 [horses] in corrals and just over 32,000 in pastures.”

Warr’s comments came during a 90-minute long Power Point presentation at the BLM’s Salt Lake Field Office, during which he explained the condition of wild horse herds in Utah, what is being done to manage them, and how the BLM became the designated manager of wild horses and burros throughout the west.

His presentation was attended by about 25 people, some of whom came to question the BLM’s use of helicopters to gather horses for adoption. Some asserted the practice is cruel and unnecessarily terrifies the animals.

But Warr said due to the size of wild horse herds, helicopters are the most effective and humane way to move horses to corrals. He did say more helicopter pilots who understand horses are needed.

“If we had a perfect world, I’d use bait traps, not helicopters,” he said. “But with the population, we need helicopters.”

Warr said a helicopter will be used during the Cedar Mountain herd gathering, which is scheduled for Feb. 8-22. The Cedar Mountain Herd Management Area covers 211,000 acres. Horses gathered will be transported to a BLM adoption facility in Delta.

He said the BLM will spend $900-$1,000 on each captured horse before it is transported to Delta. Those costs include equipment and manpower. But the larger expense for the BLM is maintaining horses in corrals and pastures that don’t get adopted, which he called “a huge challenge for our program.”

According to the BLM, the agency spends $48,000 for one unadopted horse that remains in a corral over its lifetime. As a result, the BLM only removes as many animals from ranges as can be adopted.

Which, as Warr indicated, has put the BLM in a predicament in meeting required Appropriate Management Levels for herd management areas. For example, the set AML for the Cedar Mountain herd is around 390, based on available forage and water. If 300 horses are gathered in February, the herd’s population will still exceed its AML by more than 200.

Warr said the last time the Cedar Mountain herd was gathered was four years ago. He added the popular Onaqui Wild Horse Herd, which is often photographed and viewed by tourists south of Dugway Proving Ground, will undergo a gathering in the future.

But for that herd, the BLM will likely use a bait trap instead of a helicopter, he said.

The BLM began managing wild horses and wild burros with the signing of the Wild-Free Roaming Horses and Burros Act in 1971, which federally protected the animals. Later amendments added management requirements and steps, including the use of helicopters to corral excess herds for adoption.