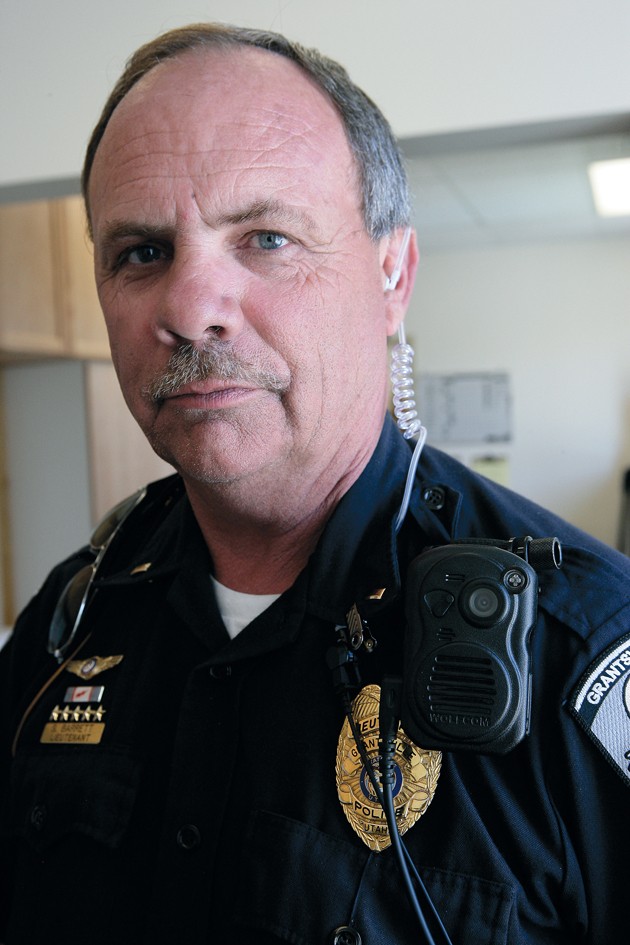 Lt. Steve Barrett with the Grantsville City Police Department, displays a Wolfcom Third Eye. The camera records both audio and visual content, which can be used as evidence.

April 21, 2015
Body cameras are ‘helpful tool’ for police and public

A series of officer-involved shootings have grabbed national headlines, prompting citizens, policy makers and law enforcement departments to consider the use of body cameras.

For law enforcement agencies in Tooele County, body cameras are considered a helpful tool that benefits officers as well as the public.

The Grantsville City Police Department was the first in the county to outfit all officers with body cameras and one of the first agencies in Utah. Lt. Steve Barrett said the cameras, manufactured by California-based Wolfcom Enterprises, have proven to be useful in a number of different facets of law enforcement.

The cameras record audio, are night vision capable and can photograph still images. In addition to recording interactions between police and citizens, the body cameras can be used to document crime scenes before evidence has been moved, Barrett said.

“It’s just another tool,” he said.

Grantsville police also use body cameras for all SWAT operations, some training and during the interview process for new officers. Barrett said the department is transitioning to body cameras as a replacement for dash-mounted cameras in police cruisers due to the cost savings.

Body cameras have another benefit for departments: dealing with complaints about police behavior. Barrett, who runs internal investigations for Grantsville police, said that as many as 90 percent of claims against the department have been proven unfounded once the body camera footage is reviewed.

“They’ve really saved the bacon of the officer,” he said.

Each Grantsville officer’s video is downloaded onto an external hard drive at the end of their shift. The downloaded footage can’t be altered but can be reviewed by Barrett and Grantsville City Police Chief Kevin Turner.

For the Tooele City Police Department, footage is wirelessly downloaded from police dash cameras when officers pull into the station. Body camera footage is still downloaded to a secure server manually but Chief Ron Kirby said it’s possible video from body cams could be automatically downloaded in the future.

While Grantsville moves away from the more expensive dash cameras, Kirby said Tooele police will continue to use both cameras. In addition to serving as back up, the dash cameras view an incident from a different perspective and may capture something a body camera, mounted to an officer’s chest, may not.

“They’re capturing a fairly narrow field,” he said. “They just don’t capture everything.”

While body cameras offer a window into interactions between the police and the public, Kirby said they can offer strange angles and poor quality images, especially in low light situations.

He made the comparison between body cameras and instant replay in NFL games. Instant replay will show a single play from various angles, in high definition and good lighting, that still sparks controversy.

The recent national conversation about police use of force, sparked by the officer-involved shooting that killed unarmed 18-year-old Michael Brown in Ferguson, Missouri, has called for departments to use body cameras for more accountability for officers. While Kirby believes they are a useful police tool, he doesn’t believe footage from body cameras is a cure-all.

Kirby said body cameras have revealed police misconduct in agencies around the country. He said that some people didn’t know about uses of justified force in their community before cameras — both body cameras and phones — were able to capture the footage.

The Tooele County Sheriff’s Office is currently revising its body camera policy under Sheriff Paul Wimmer. Deputy’s body cameras are supposed to be turned on for all contact with the public, said Chief Deputy Brian White.

Raw video from a deputy’s body camera is downloaded to a private server, White said. For traffic stops and other routine interactions, the file is saved for 180 days, he said.

If a court case may require footage, a copy is burnt to a CD that is not editable, White said. While most files are deleted after 180 days, they can be saved indefinitely, he said.

Video of routine interactions is reviewed randomly bi-weekly, White said. It allows the sheriff’s office the opportunity to review police interactions with the public to better inform training.

“It lets us be a little more transparent,” White said.

Sheriff’s department body cameras are also turned on when deputies are first responders on medical calls. Tooele and Grantsville police do not turn their cameras on when responding to medical calls over concerns about federal Health Insurance Portability and Accountability Act law.

White said the sheriff’s office policy now requires body cameras are turned on because what may begin as a medical call could change. If the situation is purely medical in nature, the deputy can turn off their camera to protect an individual’s privacy, he said.

The sheriff’s office experienced how quickly a medical call can turn into a more dangerous situation last December. After a deputy arrived to a medical assist in Stansbury Park, they found 28-year-old Nicholas McGehee inside his home with a shotgun.

In the confrontation that followed, McGehee allegedly retreated into his home, then returned with a handgun, which he pointed at a deputy. From behind the cover of his police vehicle, the deputy fired three shots at McGehee, killing him.

While the Tooele County Attorney’s office found the use of force justified in January, the deputy did not turn on his body camera. White said deputies should always attempt to activate their cameras but department policy doesn’t require them to turn on the camera if it would endanger them.