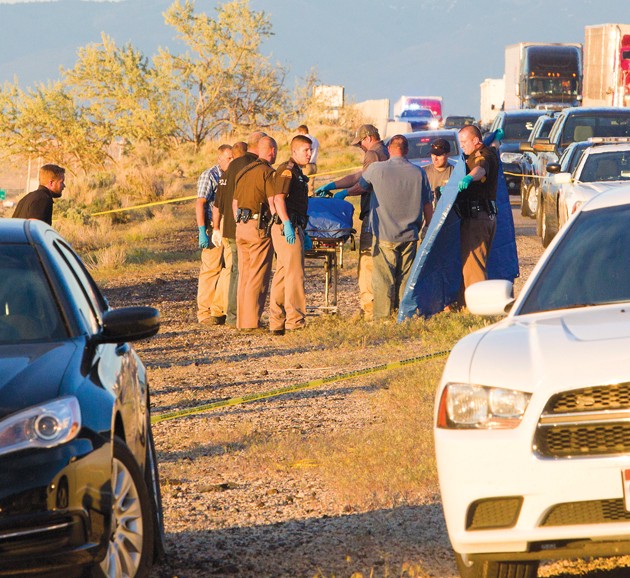 Investigators move the remains of a women discovered in a suitcase off of Interstate 80 on Thursday near the Tooele/ Salt Lake County border.

Remains could be female homicide victim missing since last November ♦

Unified Police are investigating a lead that the human remains found in a suitcase off Interstate 80 near Saltair last Thursday may belong to a missing Las Vegas woman.

UPD Lt. Justin Hoyal said the department is working with the Las Vegas Metropolitan Police Department to determine if the victim is Susana Villalvazo, 46, who has been missing since last November.

“That’s the best lead we have right now,” Hoyal said.

According to police, Villalvazo matches the description of the remains. An autopsy Friday morning described the victim as being middle-aged with long dark hair, a tattoo on the left wrist of a pink breast cancer ribbon and a right breast mastectomy.

The autopsy determined the victim died as the result of a shooting, in what police have ruled a homicide. Medical examiners also determined the suitcase with the remains had been left on the side of the road for several weeks to several months.

Villalvazo’s stepfather, Samuel Teran, was a suspect in her disappearance before he died by suicide in the drive-thru of a North Las Vegas Burger King.

Hoyal said it could be several weeks before laboratory results can conclusively prove the victim’s identity.

The suitcase containing the remains was first discovered by a Utah Department of Transportation employee in tall reeds over the bank near mile marker 102 on I-80 Thursday afternoon. When a UHP officer arrived on scene, the body was discovered and the investigation began.

Medical examiners arrived around 7:30 p.m. and the suitcase and victim were transported to the medical examiner’s office around 8:05 p.m.

While police conducted their investigation, traffic was reduced to a single westbound lane on I-80. Traffic was backed up for more than a mile and slowed to a crawl from the SR-201 overpass to beyond the Saltair exit for several hours Thursday evening.

While Hoyal called the Villalvazo lead “very strong,” UPD is still looking for any information on the homicide or the identity of the victim and can be reached at 385-468-9817.