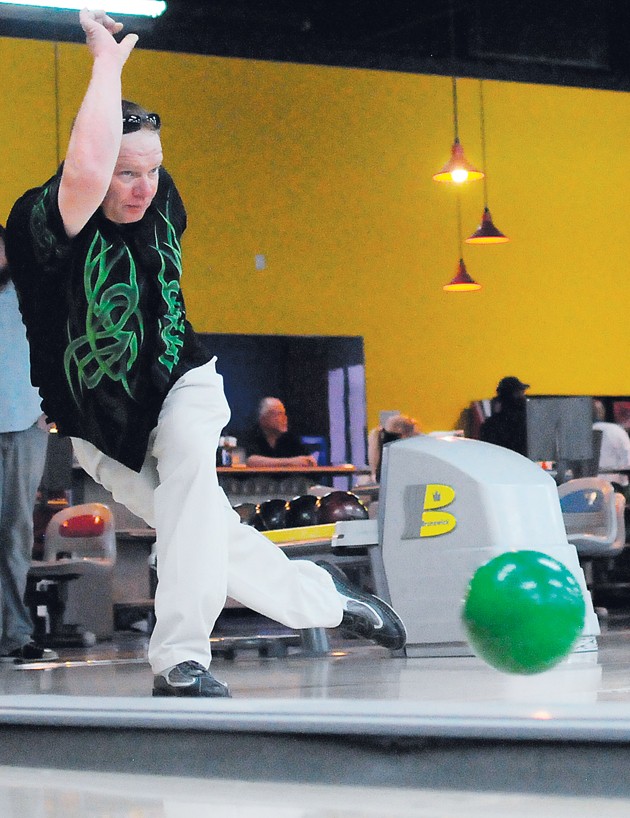 Chris Burton bowls in the 89th Annual Utah Championship Tournament at All-Star Lanes in Tooele. The tournament started Saturday and will run every weekend for the next five weeks.

Chatter and laughter are common in a bowling center on a Sunday afternoon with the constant sound of balls rolling on the hardwood followed by loud crackings when the balls smack the pins.

But people situated around Salt Lake City bowler Dave Warenski were quiet as they intently watched him finish off one of his games Sunday afternoon at All-Star Lanes in Tooele.

Warenski was close to achieving perfection for the ninth time in his 40 years of bowling. He had rolled 12 straight strikes and one more would mean a perfect game.

The 13th roll was not quite as great as the previous 12 and left two pins still standing for a 298 game.

“No matter what happens there is still a bit of luck involved,” Warenski said. “All you try to do is think one ball at a time, but you do start to feel the nerves as the game goes on.”

Warenski has rolled eight 300 games in his lifetime, and this year his game average is 216. He was competing Sunday in this year’s Utah State USBC Bowling Association 89th Annual Championship Tournament.

The tournament continues the next five Saturdays and Sundays, and a handful of few 300 games could be rolled.

“Five or six players may bowl 300 games during the tournament,” said Lynn Roth, vice president of the state association.

An estimated 1,356 bowlers will compete in the tournament with a scratch winner and handicap winner in each of four categories. Categories include all-events, singles, doubles and team. Bowlers are scheduled to complete all of their nine games in one or two days of the 12 days available.

The competition is available to all Utah bowlers and those who live out of state from Mesquite, Nev., southern Idaho or western Colorado who compete in Utah leagues.

The Utah State Championships rotate each three years from northern Utah, to central Utah to southern Utah. This year, Tooele’s All-Star lanes won the bid from the central area. This is the third time Tooele has hosted the state tournament, and the first time it has been held at All-Star Lanes.

“We have 20 bowling associations in the state and each one has a certain number of delegates with about 57 delegates total who vote on where to hold the tournament,” Roth said.

The bowling centers will provide a bid with how much they would charge per game for the bowlers. It can be a big money-maker for the bowling center. Last year, Davis Lanes in Layton took in $30,000 just in lineage rates. All-Star lanes could take in $35,000 on lineage rates this year. Then there are the beer sales in the bar and the burger and hot dog sales and the arcade games for the kids. Plus it provides business for local restaurants and hotels. It’s a mini economic boom for the 12 days of the tournament.”