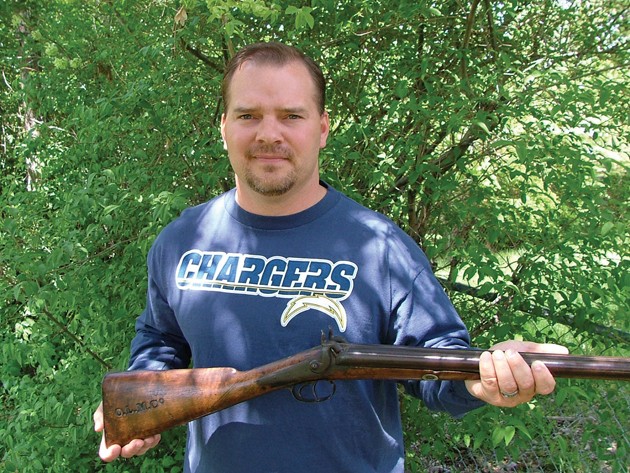 July 27, 2017
Boyd was a pioneer who helped put Pony Express on the map

Out in the middle of Snake Valley there is a fork in the road near a small volcanic knoll. The road to the left heads south toward Trout Creek and Partoun. The main road heads due west across the flat toward the settlement of Callao and the towering Deep Creek Mountains.

Back in the early 1860s, a pioneer named George Washington Boyd built a station here to serve the Pony Express Trail and the Overland Stage. The ruins of this station are one of the best preserved archaeological relics from that era left along the trail in Tooele County’s West Desert.

Boyd was one of the pioneers who contributed greatly to the success of the Pony Express and Overland Stage route through Western Utah by exploring routes, building roads and stations, and keeping remote stations supplied with water, hay and fuel. Sadly, the contributions that this great pioneer made have largely been forgotten. I have pieced together from various sources some information on Boyd and compiled it here so we might remember this great man.

Boyd was born on Oct, 30, 1826 in Pennsylvania. He converted to Mormonism and migrated to Utah early on. Prior to coming to Utah, George enrolled in the Mormon Battalion on July 16, 1846 and marched from Council Bluffs, Iowa to San Diego, California. This was a distance of over 1,900 miles. The Mormon Battalion was made up of approximately 500 volunteer Mormon soldiers and officers and the whole unit was commanded by regular U.S. Army officers. It is widely believed that this march across the desert southwest by the Mormon Battalion, and the show of force it represented, secured that area for the United States during the Mexican-American War.

It is said that the members of the Mormon Battalion learned desert irrigation techniques from the O’odham and Pima villagers in the vicinity of Tucson, Arizona, which proved useful to the Mormons, especially in the West Desert as they worked with the Indians to cultivate those lands.

Boyd also learned about military operations, tactics, explorations and long marches through unknown terrain. As the Mormon Battalion went along its route, it constructed a wagon road all the way to California. Once again, expertise gained through that experience, helped Boyd in his endeavors working for Maj. Howard Egan out in the West Desert of Utah along the Pony Express Trail.

By 1855, Boyd had established a reputation as a competent frontiersman, so much so that Col. Edward Jennings Steptoe hired him, along with Orrin Porter Rockwell, George Bean and Peter W. Conover to explore west from Rush Valley across the West Desert to determine if that route would be suitable for a wagon road to Carson Valley.

The men outfitted themselves at the Government Post on Rush Lake and then headed out over Johnson’s Pass, across Skull Valley and straight across the desert to the northern tip of Granite Mountain where they found a good spring of fresh water.

They continued west across the salt desert and were caught in a terrible sandstorm that was so fierce it blew the packs off of the backs of the mules several times and splashed every bit of their party with freezing salt water until they were encrusted in salt from head to toe. They found a tule swamp on the western edge of the desert near Redden Springs where they waited out the storm on the lee side of a bunch of tule reeds. This experience convinced the party that this route was not suitable for wagon travel. Based upon this information, Steptoe chose the Northern route around the Great Salt Lake and with Porter Rockwell acting as guide, he and his Army departed Utah.

In 1860, Boyd returned to the desert to work for Maj. Howard Egan. Egan, Boyd and Enos Stookey then laid out a route for the Pony Express, which soon thereafter began operations. Boyd built Black Rock, Fish Springs, Boyd and Willow Springs stations. From Willow Springs, Boyd supplied Boyd, Fish Springs, Black Rock and Dugway stations with wood and hay. Later, when the Overland Stage took over the route, Boyd, along with E.W. Tripp, continued to supply the stage stations less favorably located with wood and hay.

Several years ago, I was contacted by one of Boyd’s relatives who was stationed at Hill Air Force Base. Phillip Schaeling said he had his great, great grandfather’s shotgun and invited me to come and see it. I quickly went up there and sure enough, that old shotgun had OLM burned into the stock (Overland Mail Company). I got to hold the gun that Boyd held while riding the box on the Overland Stage. Experiences like that bring the history to life and I thank Schaeling for the opportunity.

While Boyd was at Willow Springs, Canyon Station was attacked by Indians in July of 1863. He and some others went up to the station afterward and found everything burned and the Indians gone. Boyd buried what was left of William Riley, the other station men, and the soldiers whose bodies were later removed to Fort Douglas and interred there.

In 1869 when Overland discontinued operations, Boyd bought the Willow Springs station and worked the land — 80 acres in Juab County and 80 acres in Tooele County until 1885 when he sold Willow Springs to Charley Bagley and sons and moved to Salt Lake City.

If you venture out into the loneliest corners of the desert — namely Dugway, Black Rock, Fish Springs and Boyd stations, consider what it must have been like to keep these remote stations supplied — especially Dugway and Black Rock where there are no resources of any kind for miles.

This was Boyd’s country. This was the land he tamed and settled. To visit Boyd’s Station, head south out of Tooele on state Route 36 until you reach the signed Pony Express Trail and turnoff on the right-hand side of the road before you reach Vernon. Turn right and follow the Pony Express Trail 70 miles to Fish Springs National Wildlife Refuge. Fourteen miles beyond that point you will arrive at the fork in the road and the ruins of Boyd’s Station where there is a parking area and interpretive panel.

According to the historical research of Fike and Headley, the original structure was small, built of stone and contained gun ports. In the structure remains you can see an old chimney and you can appreciate how Boyd gathered stones of various sizes from the knoll and fitted them together just so and then cemented them in place with some kind of crude desert mortar. If you go way out there in the desert, be prepared with a spare tire, tools, plenty of food and water and good maps. Hopefully, pioneer George W. Boyd will be better remembered for his great contributions to the success of the Pony Express, Overland Stage and the settlement of a wild and dangerous land.