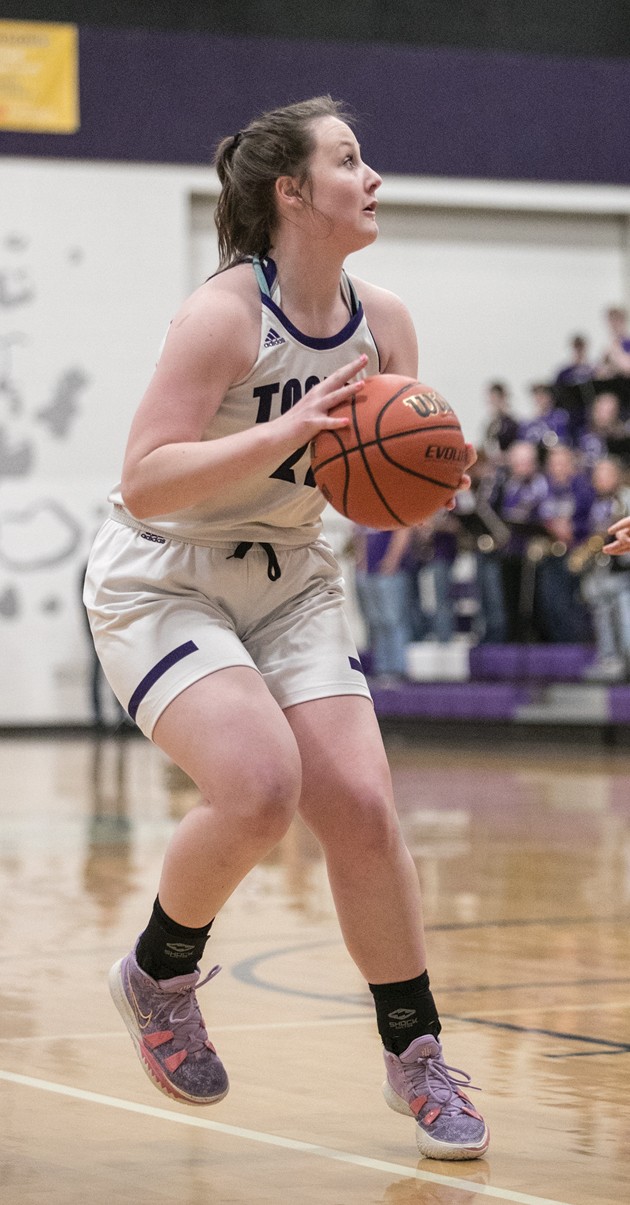 There was no questioning the tenacity and effort of Tooele High school senior basketball player Breanna Beer this season or during the previous three seasons as a player for the Buffaloes.

“Her character and attitude made her a great teammate and leader. Breanna came to practice every day willing to work hard and improve her game. Game time, as a coach, you knew she would give her all to win,” said Tooele head coach Randy Goss.

Beer is this year’s recipient of the Jackie White-Kimber Memorial Basketball Award.

The award is given annually to the member of the THS girls basketball team who best exemplifies leadership skills and character while playing an integral role on the team.

Beer was the second-leading scorer for the Buffaloes with a 6.05 scoring average and also a top rebounder.

“She has played four years for us and consistently gave her all. She isn’t a 6-foot post, which she has had to go up against, but she is tough and will battle inside and work hard for the rebounds,” Goss said.

“This year is an example of her character/attitude and competitive side. Breanna played all season with an injured foot and never complained, didn’t really say a word about it or how much it bothered her,” the coach said. “Anyone who has played basketball  knows the wear and tear your feet take in a season; as soon as the season was over, she had surgery.”

Despite the setback, Beer forged ahead.

“I have loved playing basketball in high school. I have made a lot of new friends and lots of fun memories,” she said. “My favorite part was the team dinners and game days. I grew up around sports so my family has been my main influencers. My teammates have also played a role in my motivation in sports because they are the ones who are always pushing me to get better in practice.”

Beer also is the student body president at Tooele High and known as an all-around outstanding leader and motivator for others.

“I have been lucky enough to have a really fun high school experience. I have loved being in the clubs and participating in the activities,” she said.

With several young and inexperienced players, it was a rough season for Tooele girls and they never tasted victory.

“It was definitely hard at first, but about halfway through the season we all decided to just play to have fun. It made a huge difference because we were able to enjoy playing with each other rather than worrying about our record,” Beer said.

“Breanna is always positive; I have never heard her complain once in four years. As a senior on the team, she has led by example and was willing to take on any role that will help the team – she was a great example of a teammate and leader,” her coach said.

Beer plans to attend BYU in the fall then serve a mission for The Church of Jesus Christ of Latter-day Saints.

The award is named for Jackie White-Kimber, a former Tooele High girls basketball player who died in 1988 after a battle with cancer. Beer will receive a 14-karat solid gold ring, which was designed by Lisa Tate and Linda Matekel. Tate is White-Kimber’s first cousin. The award has been sponsored by White-Kimber’s grandfather, LaVar Tate.

This year, the 2007-2008 award winner Alexis Bird Clegg volunteered to donate money to purchase the gold ring. She is the head basketball coach at Green Canyon High School where her team reached the 4A state semifinals this season. She was selected as Green Canyon Teacher of the Year for the 2018-19 school year.