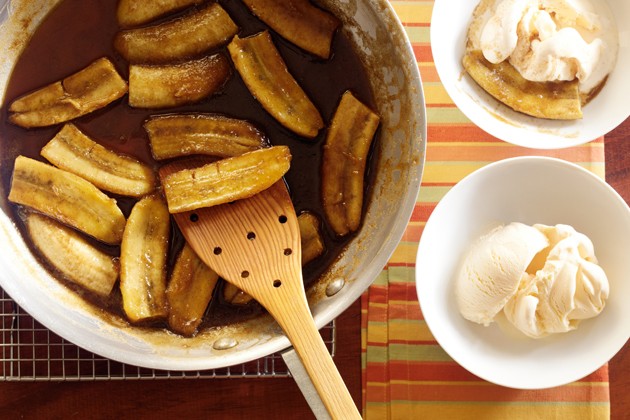 Bananas have long been one of America’s favorite fruits. Low in calories, they pack plenty of Vitamin C, potassium and fiber and contain virtually no fat, cholesterol or sodium. Nutrition experts encourage adding fruit to desserts, since Americans rarely get enough in their daily diet.

If you’re craving something fruity and sweet, look beyond banana bread or simply slicing bananas on top of your morning cornflakes. Bananas Foster, a simple, elegant and oh-so sinful concoction, originated in New Orleans in the 1950s at the legendary Brennan’s Restaurant. Named for Richard Foster, a frequent diner at the restaurant and close friend of owner Owen Edward Brennan, the recipe was created to promote New Orleans as a major port of entry for bananas shipped in from Central and South America. Today, Brennan’s flambes 35,000 pounds of bananas annually for what has become the city’s signature dessert.

Like most of the locally beloved fare served in the Big Easy, this dessert is laden with some of the biggest no-no’s on a calorie-conscious person’s watch list: butter, ice cream and booze. The bananas are sauteed in butter, rum and brown sugar into a state of sweet gooey goodness, then set ablaze in a flaming finale (typically in a dramatic tableside performance) and served with a scoop of vanilla ice cream. Caloric excess aside, the great thing about this pyrotechnic masterpiece is it’s easy to make, quick and too tasty for words. Oh yeah, and it also contains a serving of fruit.

1. Combine butter, brown sugar and cinnamon in a flambe pan or skillet. Place over low heat and cook, stirring, until sugar dissolves. Stir in 1/4 cup rum, then place bananas in the pan. When banana sections soften and begin to brown, carefully add remaining rum. Continue to cook until rum is hot, remove from heat and then ignite if desired. When the flames subside, lift bananas out of pan and place four pieces over each scoop of ice cream. Spoon warm sauce over top and serve immediately. Serves 4.