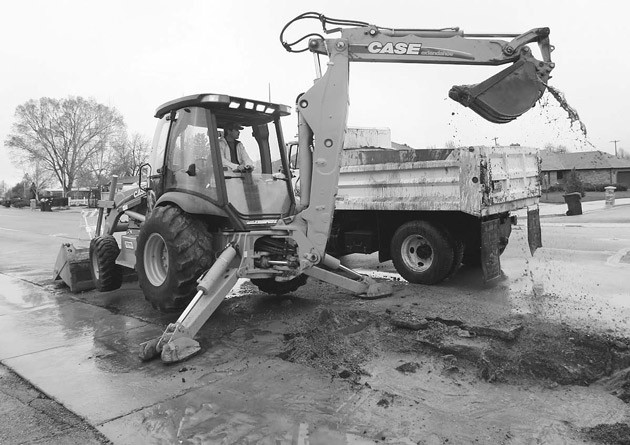 Tooele City workers dug up a main water line and another line near Skyline and Nottingham Drives last weekend to make repairs.

Some houses were without water for almost three days while others were dry for no more than a couple of hours.

“We’ve been having problems with some of those lines in that area after a private company installed new lines a few years ago. Some of those people were without water for a long time and we apologize,” he said.

Webster said there were signs of a problem on Saturday night when underground seepage was noticed. He said some of the fittings were not properly installed on a high-pressure line and over time a T-fitting had been blown out of place. Webster said the city has had to repair much of the work done by the private company.

Carolyn Garcia, who lives on Meadows Drive, said the water was off at her house for several hours on Sunday, all day Monday and came back on Tuesday.

“Nobody told us on Sunday that we would be without water, usually somebody calls,” Garcia said.

Some residents on the north end of Nottingham Drive reported that water was only off for a few hours on Monday.

In other items dealing with Tooele’s infrastructure, Tooele City has entered into a contract with Raass Brother’s Inc. of Lehi, for a sidewalk replacement program. Residents are responsible for repair of sidewalks in front of their houses, but the city will pay for 50 percent of repairs. Webster said the city is compiling a list of houses that need sidewalk repair. The City Council approved the contract last week.

Property owners must pay Tooele City 50 percent of the estimated cost before the work is done and then the City will pay the contractor the full amount after the work is completed and accepted.